The Discipline of Perception 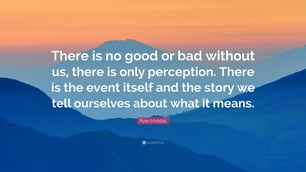 Introduced to Ryan Holiday’s The Obstacle Is the Way: The Timeless Art of Turning Trials into Triumph at the St Louis Scale Up summit, I’ve discovered the book, it’s insights, and teachings extraordinarily valuable for how to live your life and run your business.

The Obstacle is the Way is about stoicism.  Stoicism, an ancient Greek philosophy, teaches virtue, the highest good, is based on knowledge.  The wisest live in harmony with the divine Reason (also identified with Fate and Providence).  It governs nature. Those who follow stoicism learn to be indifferent to the vicissitudes of fortune and to pleasure and pain. 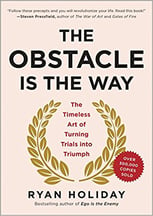 Holiday shares biographical stories of great leaders in his book, including Abraham Lincoln, Ulysses Grant, Theodore Roosevelt, Thomas Edison, Henry Ford, and many others who typify the stoic approach.

Overcoming obstacles is a discipline of three critical steps. It begins with how we look at our specific problems, our attitude or approach; then the energy and creativity with which we actively break them down and turn them into opportunities; finally, the cultivation and maintenance of an inner will that allows us to handle defeat and difficulty.

It’s three interdependent, interconnected, and fluidly contingent disciplines: Perception, Action, and the Will.

Positioning Systems coaching focuses on Strategic Discipline’s three disciplines of Execution: Priority, Metrics, and Meeting Rhythms. Execution is one of Four Decisions you must get right, or risk leaving significant revenues, profits, and time on the table.  Execute better and your business will increase its profits.  The following Four Decisions provide important outcomes for your business.

The Discipline of Perception – Scale Up

Before he was an oilman, John D. Rockefeller was a bookkeeper and aspiring investor—a small-time financier in Cleveland, Ohio. Rockefeller took his first job in 1855 at the age of sixteen.  He celebrated it as “Job Day” for the rest of his life! His earnings?  Fifty cents a day. 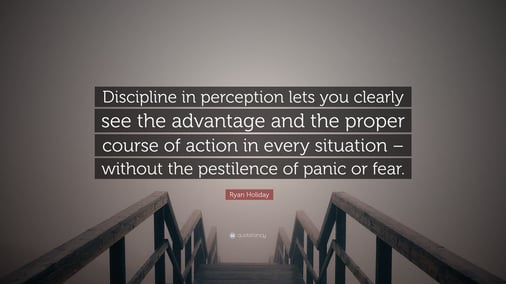 The Panic of 1857,  brought a massive national financial crisis originating in Ohio , hitting Cleveland particularly hard.   This depression was so crippling it halted westward expansion for several years.

Rockefeller might have gotten scared. The greatest market depression in history hit just as he was finally getting the hang of things. He could have quit finance altogether for a different career with less risk. Yet even as a young man, Rockefeller turned out to possess unflappable coolness under pressure. He could keep his head while he was losing his shirt. Instead of bemoaning this economic upheaval, Rockefeller eagerly observed the momentous events. He chose to look at it as an opportunity to learn, a baptism in the market. Quietly he saved his money, watched what others did wrong, and observed the weaknesses in the economy and how this left many unprepared for change or shocks.

Rockefeller had the Discipline of Perception: He internalized an important lesson that would stay with him forever: The market was inherently unpredictable and often vicious—only the rational and disciplined mind could hope to profit from it. Speculation led to disaster, he realized, and he needed to always ignore the “mad crowd” and its inclinations.

Holiday shares this story in the book: At twenty-five, a group of investors offered to invest approximately $500,000 at his direction if he could find the right oil wells in which to deploy the money. Grateful for the opportunity, Rockefeller set out to tour the nearby oil fields. A few days later, he shocked his backers by returning to Cleveland empty-handed, not having spent or invested a dollar of the funds. The opportunity didn’t feel right to him at the time, no matter how excited the rest of the market was—so he refunded the money and stayed away from drilling.

It was this intense self-discipline and objectivity that allowed Rockefeller to seize advantage from obstacle after obstacle in his life, during the Civil War, and the panics of 1873, 1907, and 1929. As he once put it: He was inclined to see the opportunity in every disaster. To that we could add: He had the strength to resist temptation or excitement, no matter how seductive, no matter the situation.

Just twenty years after The Panic of 1857, Rockefeller controls 90 percent of the oil market. His greedy competitors had perished. His nervous colleagues sold their shares and left the business. His weak-hearted doubters had missed out. For the rest of his life, the greater the chaos, the calmer Rockefeller would become, particularly when others around him were either panicked or mad with greed. He would make much of his fortune during these market fluctuations—because he could see while others could not. Warren Buffet shares this perspective, “be fearful when others are greedy and greedy when others are fearful.” 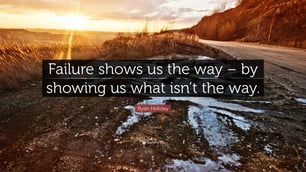 Rockefeller, like all great investors, could resist impulse in favor of cold, hard common sense.

A critic, possibly in awe of Rockefeller’s empire, described the Standard Oil trust as a “mythical protean creature” capable of metamorphosing with every attempt by the competitors or the government to dismantle it. The criticism reflects Rockefeller’s personality: resilient, adaptable, calm, and brilliant. He could not be rattled—not by an economic crisis, not by a glittery mirage of false opportunities, not by aggressive, bullying enemies, not even by federal prosecutors.

Was Rockefeller born this way? No. This was a learned behavior. And Rockefeller got this lesson in discipline somewhere. It began in that crisis of 1857 in what he called “the school of adversity and stress.”

Contrary to how many of us view obstacles Rockefeller had the Discipline of Perception, “Oh, how blessed young men are who have to struggle for a foundation and beginning in life, I shall never cease to be grateful for the three and half years of apprenticeship and the difficulties to be overcome, all along the way.”

Desperation, despair, fear, powerlessness—these reactions are functions of our perceptions. 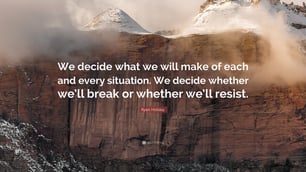 Choose How You Feel

You must realize: Nothing makes us feel this way; we choose to give in to such feelings.

And it is precisely at this divergence—between how Rockefeller perceived his environment and how the rest of the world typically does—that his nearly incomprehensible success was born. His careful, cautious self-confidence was an incredible form of power. To perceive what others see as negative, as something to be approached rationally, clearly, and, most important, as an opportunity—not as something to fear or bemoan. Rockefeller is more than just an analogy. 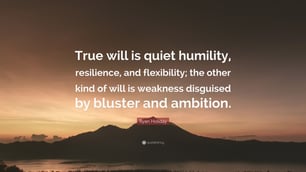 The Obstacle is the Way – Discipline #3 – The Will

Overcoming obstacles is a discipline of three critical steps: Perception, Action, and Will. Action would be the next Discipline to share, however, one of my customers is going through a particularly difficult time personally.  He struggles mightily, yet achieves success through his extraordinary will.  His story and the Discipline of Will, next blog.