Who is the real enemy of execution?  It’s your day job!

In this blog I provide specific numbers that graphically illustrate the problem that comes from not having clarity.  Make sure you take a hard look at what’s going on in most businesses, and why developing Strategic Discipline: Priorities, Metrics & Meeting Rhythms can have such a dramatic effect on the execution and growth of your business.

View Patrick Lencioni’s recent short two minute video on The Advantage Healthy vs. Smart Video. Getting everyone to get their oars in the water rowing in the same direction is possibly the greatest competitive advantage your business can have working for it. To achieve this you need to avoid the “Whirlwind!” 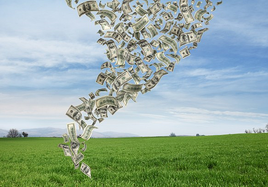 The Four Disciplines of Execution call it the whirlwind. “It’s the massive amount of energy that’s necessary just to keep your operation going on a day-to-day basis; and, ironically, it’s also the thing that makes it so hard to execute anything new. The whirlwind robs from you the focus required to move your team forward. Leaders seldom differentiate between the whirlwind and strategic goals because both are necessary to the survival of the organization.”

Important goals that require you to do new and different things often conflict with the “whirlwind” of the day job, made up of urgencies that consume your time and energy

The whirlwind isn’t necessarily bad. It keeps your organization alive and you can’t ignore it. If you ignore the urgent, it can kill you today.

It’s also true, however, that if you ignore the important, it can kill you tomorrow. In other words, if you and your team operate solely from within the whirlwind, you won’t progress—all your energy is spent just trying to stay upright in the wind. The challenge is executing your most important goals in the midst of the urgent!

Here’s a two ideas you need to get your arms around.

Strategic Discipline (Priorities, Metrics and Meeting Rhythms) follow the same principle the authors outlined in The 4 Disciplines of Execution. They aren’t designed for managing your whirlwind. These Disciplines are rules for executing your most critical strategy in the midst of your whirlwind.

In a key study on organizational change, the global management-consulting firm Bain & Company reports these findings: “About 65 percent of initiatives required significant behavioral change on the part of front-line employees—something that managers often fail to consider or plan for in advance.”

As a leader, you own responsibility for the system. Although a particular person can be a big problem, if you find yourself blaming the people, you should look again.

One prime suspect behind execution breakdown was clarity of the objective: People simply didn’t understand the goal they were supposed to execute.

In fact, in our initial surveys we learned that only one employee in seven could name even one of their organization’s most important goals.

That’s right—15 percent could not name even one of the top three goals their leaders had identified. 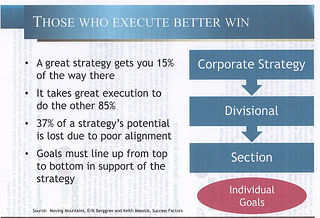 The other 85 percent named what they thought was the goal, but it often didn’t remotely resemble what their leaders had said. The further from the top of the organization, the lower the clarity.

Lack of commitment to the goal was another problem. Even those people who knew the goal lacked commitment to achieving it. Only 51 percent could say that they were passionate about the team’s goal, leaving almost half the team simply going through the motions.

Accountability was also an issue. A staggering 81 percent of the people surveyed said they were not held accountable for regular progress on the organization’s goals. Can you feel the importance of Pearsons Law and the critical value of Company, Department and Individual Dashboards?

Alignment is only possible whenever one knows what the Company’s One Thing for the Year and the Quarter is.  Your people need to know what the most impactful measurements are for their position.  What should they be measuring?  Can they go home each day and know they’ve contributed and reached their benchmarks for achievement, both to their position and to the company’s One Thing?  That’s engagement.  That’s empowerment.  It’s what separates Good from Great!

And the goals were not translated into specific actions—87 percent had no clear idea what they should be doing to achieve the goal. No wonder execution is so inconsistent. In short, people weren’t sure what the goal was, weren’t committed to it, didn’t know what to do about it specifically, and weren’t being held accountable for it.

The tenth element of Rockefeller Habits 4-3-2-1 formula is a Catalyst.  A Gazelles Business Coach is a catalyst who primary function is to ask questions and hold you and your team accountable.  Through my journey with Acute Myeloid Leukemia and Bone Marrow Transplant you may be surprised to discover that I’ve continually had coaches that have helped me succeed.  Next blog I’ll begin introducing some of the people who’ve been responsible for coaching me starting with a former customer who contributed the most important element to my success – the meditation habit.