The Secret of Life - Breath 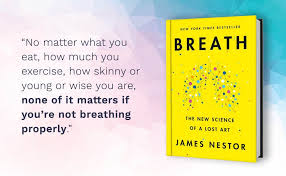 Ever since I had a bone marrow transplant, I’ve had a condition called “dry mouth.” Sleeping while breathing through my mouth exacerbated this condition, forcing me to always have a glass of water next to my bed.

At the same time, I’d discovered I was making frequent trips to the bathroom. It appears the two are related.

In James Nestor’s, Breath: The New Science to a Lost Art, I’ve stumbled upon what appears to be a solution to both issues: Breath through my nose.

Call me crazy, but since receiving a shipment of medical tape several weeks ago, I’ve been taping my mouth shut at night. As a result? Both issues have dramatically improved! 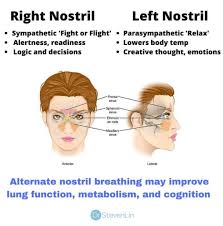 Did you know your right and left nostrils of your nose work like an HVAC system, controlling temperature and blood pressure and feeding the brain chemicals to alter our moods, emotions, and sleep states? Our nose is the silent warrior: the gatekeeper of our bodies, pharmacist to our minds, and weathervane to our emotions.

The right nostril is a gas pedal. Inhale primarily through this channel, and circulation speeds up, your body gets hotter, and cortisol levels, blood pressure, and heart rate all increase.

Inhaling through the left nostril has the opposite effect: it works as a kind of brake system to the right nostril’s accelerator. The left nostril is more deeply connected to the parasympathetic nervous system, the rest-and-relax side that lowers blood pressure, cools the body, and reduces anxiety.

Our bodies operate most efficiently in a state of balance, pivoting between action and relaxation, daydreaming and reasoned thought. This balance is influenced by the nasal cycle, and may even be controlled by it.

Did you know the perfect inhale and exhale is 5.5 seconds long for each?

In the 1830’s George Catlin, a Philadelphia Attorney gave up his job to become a painter, then decided to travel west to be in nature and explore the American Indian.

Although his health was failing, Catlin yearned to be in nature, to capture real depictions of humanity. Catlin spent the next six years traveling the Great Plains documenting the lives of 50 Native American tribes.

While the tribes varied region by region, with different customs, traditions, and diets. All 50 tribes shared the same superhuman physical characteristics. In some groups, such as the Crow and the Osage, Catlin wrote there were few men, “at their full growth, who are less than six feet in stature, and very many of them six and a half, and others seven feet.” All seemed to share broad shoulders and barrel chests. The women were nearly as tall and just as striking. (The average American then was 5’8”)

Despite never seeing a dentist or doctor, the tribal people had teeth that were perfectly straight—“as regular as the keys of a piano,” Catlin noted. Nobody seemed to get sick, and deformities and other chronic health problems appeared rare or nonexistent. The tribes attributed their vigorous health to a medicine Catlin called the “great secret of life.”

The secret was breathing.

Breath inhaled through the mouth Native Americans said sapped the body of strength, deformed the face, and caused stress and disease.

Breath inhaled through the nose kept the body strong, made the face beautiful, and prevented disease.

Healthy nasal breathing started at birth. Mothers in all these tribes followed the same practices, carefully closing the baby’s lips with their fingers after each feeding. At night, they’d stand over sleeping infants and gently pinch mouths shut if they opened.

Through a variety of methods children were trained to breathe through their noses, all day, every day. They would carry the habit with them the rest of their lives. 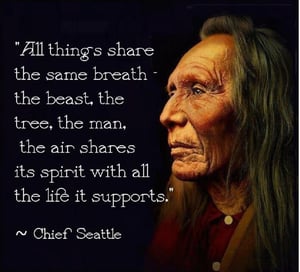 Twenty years later, at age 56, Catlin decided to travel and live with indigenous cultures in the Andes, Argentina, and Brazil. Did “medicinal” breathing practices extend beyond the Plains?

Catlin had suffered one respiratory problem after another as a boy. In his early 30s before he went West, these problems became so severe he’d sometimes spit up blood.

Friends were convinced he had lung disease. Every night Catlin feared he would die.

Catlin forced his mouth closed while he slept and always breathed through his nose during waking hours. Soon, there were no more aches, pains, or bleeding. By his mid-30s, Catlin reported feeling healthier and stronger than at any other time in his life. “I at length completely conquered an insidious enemy that was nightly attacking me in my helpless position, and evidently fast hurrying me to the grave,” he wrote.

George Catlin would live to be 76, about double the average life expectancy at the time. He credited his longevity to the “great secret of life”: to always breathe through the nose.

Breath reveals why our mouths are smaller and how breathing through your nose helps you live longer, and healthier.

Watch this 4 minute video to learn how breathing can lower your blood pressure.

Can YOU achieve more? Create a culture where everyone is inspired to give their best, contact us today to schedule a free exploratory meeting. 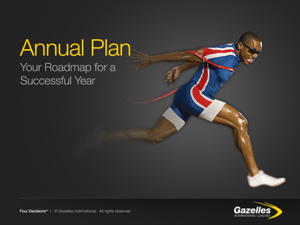 Many of you may have already had your annual planning meetings. The next several blog we’ll share best practices for Annual Planning, agenda’s, tools, resources, and ideas you should consider for planning 2021.