The Majority You Want Comes From the Minority You Do 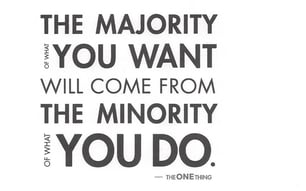 Inequality of effort for results is everywhere in your life if you simply look for it.

In The ONE Thing: The Surprisingly Simple Truth Behind Extraordinary Results, chapter “Everything Matters Equally,” Gary Keller shares a story how he changed his business:

“In 2001, I called a meeting of our key executive team. As fast as we were growing, we were still not acknowledged by the very top people in our industry. I challenged our group to brainstorm 100 ways to turn this situation around. It took us all day to come up with the list.

The next morning, we narrowed the list down to ten ideas, and from there we chose just one big idea. The one that we decided on was that I would write a book on how to become an elite performer in our industry.

It worked. Eight years later that one book had not only become a national bestseller, but also had morphed into a series of books with total sales of over a million copies. In an industry of about a million people, one thing changed our image forever.”

To emphasis his point, Keller shares this, “Now, again, stop and do the math. One idea out of 100. That is Pareto to the extreme. That’s thinking big, but going very small. That’s applying the ONE Thing to a business challenge in a truly powerful way.” 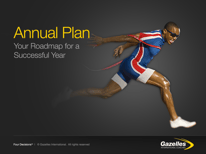 Keller’s description of working with his executive team is exactly the process I’ve facilitated with my customers for the past 10 years as a Gazelles business Coach for Positioning Systems.

It paraphrase my Sales Manager, Mike O’Brien’s words, “Let’s through a bunch of shit against the wall and see what sticks!”

The difference is we’re not throwing shit against the wall, we’re throwing ideas, big ideas that will move the company forward.  Ideas that must get done in order for the business to succeed.

When we’re done throwing all the ideas that every one has come up with for the company, we ask the One Thing Question: “What’s the One Thing, we can do, such that by doing it, everything else will be easier or unnecessary?”

In Keller’s case it was to write a book.

In my customers case this year, One Things included, An Employee Incentive Program (based on Performance), Hire 9 People, Do What You Say You’re Going to Do, and A Harmonious Culture or Accountability.

Each of these ONE THINGS required a metric, to ensure we had a clear picture of what success would look like.

Richard Koch, in his book The 80/20 Principle, defined the Pareto Principle: “The 80/20 Principle asserts that a minority of causes, inputs, or effort usually lead to a majority of the results, outputs, or rewards.” In other words, in the world of success, things aren’t equal. A small amount of causes creates most of the results. Just the right input creates most of the output. Selected effort creates almost all of the rewards.

As we pointed out in Everything Matters Equally – NOT, When You Pursue Your ONE THING, The 80/20 principle is not essentially a fact.  It could be 90/20 or 70/10 or even 65/5.  The fundamental truth is always present.  Not everything matters equally.  Some things (the essential things for each of us) matter more, much more than others.

The One Thing – Pareto to the Extreme

In my Annual Strategic Planning Sessions, the hungriest, deepest thinkers invest a day or more ahead of the actual annual planning to look at each of the Four Decisions, The Outthinker Process,  Strategic Growth Ideas.  By the time we begin putting (throwing as Mike would call it) ideas for 2018 on our large Post-It notes, they’ve added to their own lists of Annual Priorities they completed before the workshop.  We have a plethora of burning growth ideas.

We then ask the One Thing Question.

Just as Keller recommends, “Start with as large a list as you want, but develop the mindset you will whittle your way from there to the critical few and not stop until you end with the essential ONE. The imperative ONE.”

The beauty of The One Thing is it simplifies your focus, your message, your vision.

One of my customers promoted one of their people to COO.  Together with the company president, we discussed what accountabilities to focus and reward him on at the end of the year. He wanted to keep it as simply as possible.  We agreed on holding him accountable to the annual One Thing, Counter Balance, Net Profit and attaining 75% of the Annual Plan Priorities.

This assures he will be focused on achieving the company’s Top Priority for 2018. Since attaining 75% of the Objectives for the year are his reporting people’s priority, he will also be making sure his executive team hits their targets. 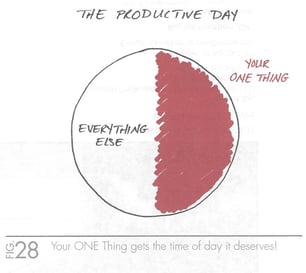 Looking for help achieving your growth goals? Positioning Systems’ Strategic Discipline helps mid-sized ($5M - $250M) business Scale-UP. We’re experts at keeping The One Thing – Your One Thing! Are you avoiding a conversation with yourself on how you can grow your business? Contact dwick@positioningsystems.com for expert help to Scale Up your business!  Or take our Four Decisions Needs Assessment to discover how your business measures against other Scaled Up companies. We’ll contact you.

A Christmas Story – Next Blog

In business we often forget the value our employees place on their employer. Two weeks ago I had the good fortune of attending one of my customers Christmas parties in Las Vegas. Sitting at a table with several of their employees, I captured the impact this company had on the lives of one of their team members.  That story and reflections on my personal Christmas growing up next blog.