The ONE Thing: The Surprisingly Simple Truth Behind Extraordinary Results 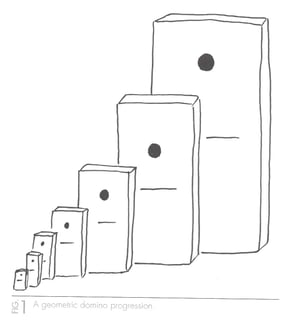 A foundational principal we will teach at the Scaling Up Workshop on Wednesday at our November 11th Scaling Up Workshop in Cedar Rapids, IA is One Thing.  We recommend that when choosing a priority you choose One Thing for the year or your quarter to choose to focus on.  It’s based on the principal that less is more.

If you want substantiated proof of the power of One Thing pick up the book The ONE Thing: The Surprisingly Simple Truth Behind Extraordinary Results by Gary Keller, Jay Papasan.

Most people believe they can multi-task; they believe that by attempting more they will get more done.  The opposite is true.

The authors ask this question in the book:  What’s the ONE Thing I can do such that by doing it everything else will be easier or unnecessary?

We ask a very similar question in our work with our customers:  What’s the one thing if you could only accomplish one thing that would have the greatest impact on your business?  That question is focused on your business accomplishments whether it is for the quarter or the year.  The authors suggest asking this question repeatedly for your week, your day, your month, etc.

Gary Keller is chairman of the board and cofounder of Keller Williams Realty, Inc., which holds the #1 position as the largest real estate company in the United States.  Keller discovered, “Where I’d had huge success, I had narrowed my concentration to one thing, and where my success varied, my focus had too.”

“When you want the absolute best chance to succeed at anything you want, your approach should always be the same.  Go small.  “Going small’ is ignoring all the things you could do and doing what you should do.  It’s recognizing that not all things matter equally and finding the things that matter most.  It’s a tighter way to connect what you do with what you want.  It’s realizing that extraordinary results are directly determined by how narrow you can make your focus.”

Keller believes there are Six Lies Between you and Success.  One of those is that all things matter equally.

If everyone has the same number of hours in a day, why do some people seem to get so much more done than others? How do they do more, achieve more, earn more, have more? If time is the currency of achievement, then why are some able to cash in their allotment for more chips than others? The answer is they make getting to the heart of things the heart of their approach. They go small. When you want the absolute best chance to succeed at anything you want, your approach should always be the same.

The way to get the most out of your work and your life is to go as small as possible. Most people think just the opposite. They think big success is time consuming and complicated. As a result, their calendars and to-do lists become overloaded and overwhelming. Success starts to feel out of reach, so they settle for less. Unaware that big success comes when we do a few things well, they get lost trying to do too much and in the end accomplish too little. Over time they lower their expectations, abandon their dreams, and allow their life to get small. This is the wrong thing to make small.

You have only so much time and energy, so when you spread yourself out, you end up spread thin. You want your achievements to add up, but that actually takes subtraction, not addition. You need to be doing fewer things for more effect instead of doing more things with side effects. The problem with trying to do too much is that even if it works, adding more to your work and your life without cutting anything brings a lot of bad with it: missed deadlines, disappointing results, high stress, long hours, lost sleep, poor diet, no exercise, and missed moments with family and friends— all in the name of going after something that is easier to get than you might imagine. Going small is a simple approach to extraordinary results, and it works. It works all the time, anywhere and on anything.

Because it has only one purpose—to ultimately get you to the point.

When you go as small as possible, you’ll be staring at one thing. And that’s the point.

Did you realize that in 2001 a physicist from San Francisco’s Exploratorium reproduced Lorne Whitehead’s 1983 experiment where he discovered that domino falls not only topple many things, but they could topple bigger things?  A domino Whitehead discovered is capable of bringing down another domino 50% larger than itself.

Watch the video 2 minute 33 second video here to see how starting with a 5 mm domino by the 29th domino in progression you could knock over a building as large as the Empire State Building.

Getting extraordinary results, Keller states is all about creating domino effect in your life.

Toppling dominoes is pretty straightforward.  Line them up and tip over the first one.  In life or the real world, it’s more complicated.  Life doesn’t line everything up for us.

Life doesn’t tell you, “Here’s where you should start.”

Highly successful people know this.  Every day they line up their priorities anew, find the lead domino, whack away at it until it falls.

The key is over time. Success is built sequentially. It’s one thing at a time.

Proof of the ONE Thing is everywhere. Look closely and you’ll always find it.

ONE PRODUCT, ONE SERVICE

Extraordinarily successful companies always have one product or service they’re most known for or that makes them the most money. Colonel Sanders started KFC with a single secret chicken recipe. The Adolph Coors Company grew 1,500 percent from 1947 to 1967 with only one product, made in a single brewery.

THE SIX LIES BETWEEN YOU AND SUCCESS

Keller believes there are six lies about success keeping us from living the One Thing:

These six lies are beliefs that get into our heads and become operational principles driving us the wrong way. Highways that end as bunny trails. These lies are fool’s gold that diverts us from the mother lode.

We’ll take a look at these six lies in my future blogs.