Hiring is the Single Most Important People Activity in Your Organization

“Hiring is the most important people function you have, and most of us aren’t as good at it as we think. Refocusing your resources on hiring better will have a higher return than almost any training program you can develop.” ~Laszlo Bock, Work Rules!: Insights from Inside Google That Will Transform How You Live and Lead

If true, why is it most organizations invest more in training than they do in hiring? 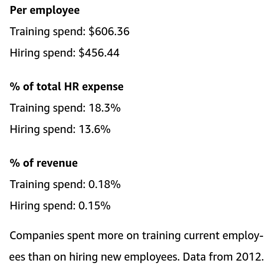 In Work Rules!: Insights from Inside Google That Will Transform How You Live and Lead, Author Laszlo Bock shares the following stats from the Corporate Executive Board on hiring vs. training.

Using ideas from Google on hiring may seem like trying to follow the New York Yankees model for winning in baseball. Lazio does share the Yankees as an example of why getting the best players makes sense to build a winning team.

Yet it bares remembering, in 1998, Google had no revenues and for years paid among the lowest salaries in the industry. As late as 2010, most people who joined Google took significant salary cuts when joining, some 50 percent or more. 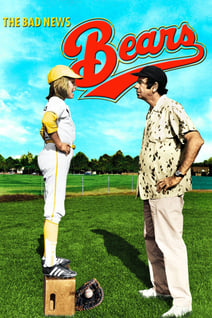 Most organizations pursue the Bad News Bears strategy, but won't admit it.

Both approaches have been tested, and at least in baseball, the Yankee's approach of paying top dollar for the best talent works. The Yankees have participated in 37% of all World Series (4X their nearest competitor, St Louis Cardinals), and more impressively won 67% of the World Series they’ve played in.

Challenges in Hiring the Best in Business

Buying the best is the way to go in building a baseball team, but it’s much trickier to build a company.

The labor market for employees isn’t as transparent as the market for baseball players.

Evidence for someone’s performance is often their resume, what they tell you, and sometimes their references. You don’t see records of their work. In baseball, any given position is similar.

In business, there are many ways to perform a marketing job.

Offering higher wages might mean more applicants, necessarily better applicants, or whether you can sift the great from the mediocre.

Executives say they recruit the best people and then groom, train, and coach them into champions. Laszlo is skeptical of these claims.

There are two paths to assemble phenomenal talent. 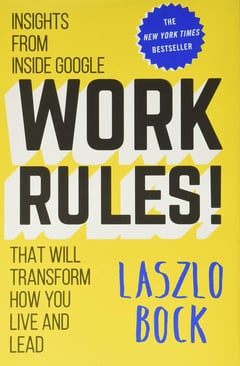 You can find a way to hire the very best (Topgrading), or you can hire average performers and try to turn them into the best.

Which of the following situations would you rather be in?

Laszlo believes you have enough money in your budget to get exceptional people—it’s just being spent in the wrong places. (For example, investing too much in training.)

Companies then turn vice into virtue by bragging about how much they spend on training.

Since when is spending a measure of quality results?

A huge training budget is not evidence you’re investing in your people. Laszlo believes it’s evidence you failed to hire the right people to begin with.

Google front-loads its people investment. Most of Google’s time and money is invested in attracting, assessing, and cultivating new hires.

Google spends more than twice as much on recruiting, as a percentage of their people budget, as the average company.

When you select better people up front, you have less work to do once they are hired. 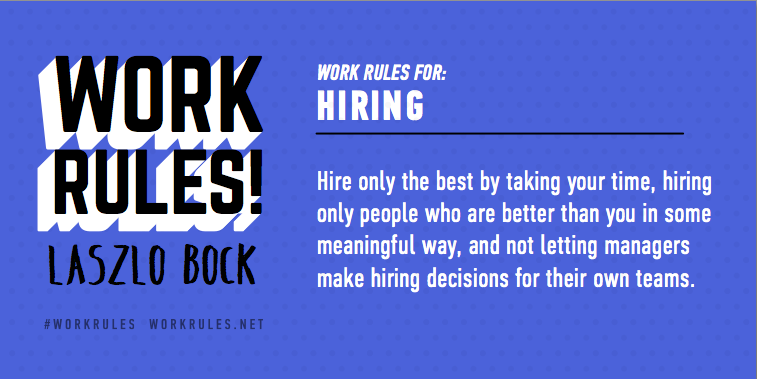 Laszlo recommends first hiring more slowly. Only 10 percent of your applicants (at best!) will be top performers, so you go through far more applicants and interviews.

Alan Eustace, Google’s SVP of Knowledge, “A top-notch engineer is worth three hundred times or more than an average engineer.… I’d rather lose an entire incoming class of engineering graduates than one exceptional technologist.”

How can you tell when you’ve found someone exceptional?

Laszlo’s rule of thumb—is the second big change to make in how you hire: “Only hire people who are better than you.”

In addition to being willing to take longer, to wait for someone better than you, you also need managers to give up power when it comes to hiring.

Yet after six months, new managers see the quality of people hired is better than they experienced anywhere in the past. They are surrounded by remarkable people who made it through the same rigorous process. They may not come to love not making hiring decisions, but they appreciate it.

Superb hiring isn’t just about recruiting the biggest name, top salesperson, or cleverest engineer. It’s about finding the very best people who will be successful in the context of your organization, and who will make everyone around them more successful.

While Google believes frontloading their people investment by hiring the best, they believe in training. Google has creative methods to train, reduce training costs, and improve team performance. Next blog we learn why your biggest opportunities are in your worst and best employees. 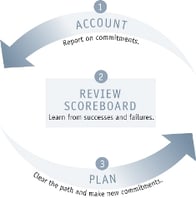 NEXT BLOG – Two Tails – Investing in Your Worst & Best Employees