EIGHT OBSESSIONS OF EVERYDAY INNOVATORS – Break it to Fix it 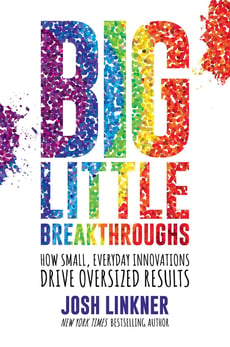 In Big Little Breakthroughs: How Small, Everyday Innovations Drive Oversized Results, Josh Linkner shares a wealth of creative ideas on how small breakthroughs can lead to big innovations and results.

Malcolm Gladwell popularized the 10,000-hour rule. Gladwell suggests mastery in a particular endeavor is achieved through ten thousand hours of deliberate practice. Bestselling author and Harvard Business Review contributor Michael Simmons thinks experiments are a far more valuable metric of success. “Creative persons, even the so-called geniuses, cannot ever foresee which of their intellectual or aesthetic creations will win acclaim,” Michael explains. Accordingly, he coined the “10,000-experiment rule,” stating creative success is directly correlated to the number of experiments conducted.

It isn’t about achieving the literal ten thousand numerical target, rather embracing the mindset of ongoing experimentation.

Is Success Tied to Experimentation?

It’s no coincidence, the greatest companies on the planet lead in innovations and technology.  Consequently, companies like Google, Facebook, and Amazon provide a lot of big little breakthroughs.   We highlighted many of Amazon’s methods of doing things differently in Think Like Amazon, including Innovation Requires A Different Mindset, Define Your Future with a Forcing Function Press Release, and Gain Clarity: Write a Narrative.

In 2010 alone, Google conducted 13,311 experiments just on its search algorithm. Instead of backing the ideas from those in the company with the most organizational seniority, Google prefers to let experimental results drive decision-making. Only 516 changes were implemented from the more than 13,000 experiments Google ran, resulting in a 96.1 percent “failure” rate. 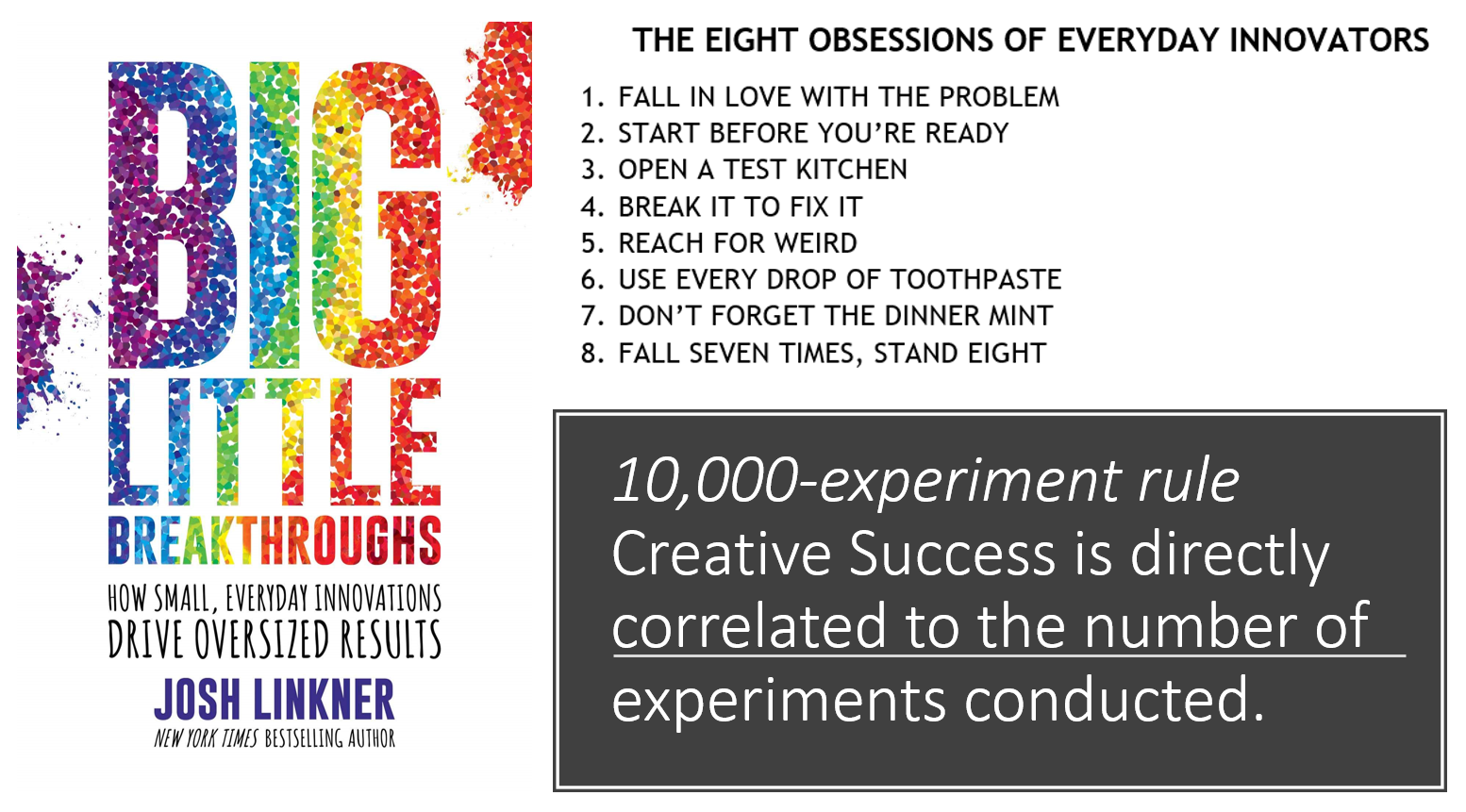 In his chapter on Break it to Fix it, Linkner shares the story of Kirk Kristiansen, a Danish furniture craftsman who started making toys in 1932 during the Great Depression. He named his one-man company “leg” and “godt” two Danish words meaning “Play Well!” This is how LEGO started. A fire in 1942 burned his small factory to the ground triggering the first of many reinventions.

Kristiansen chose to reevaluate the changing world of play after the fire. Should he equip the factory to produce the same wooden toys or explore something entirely new? 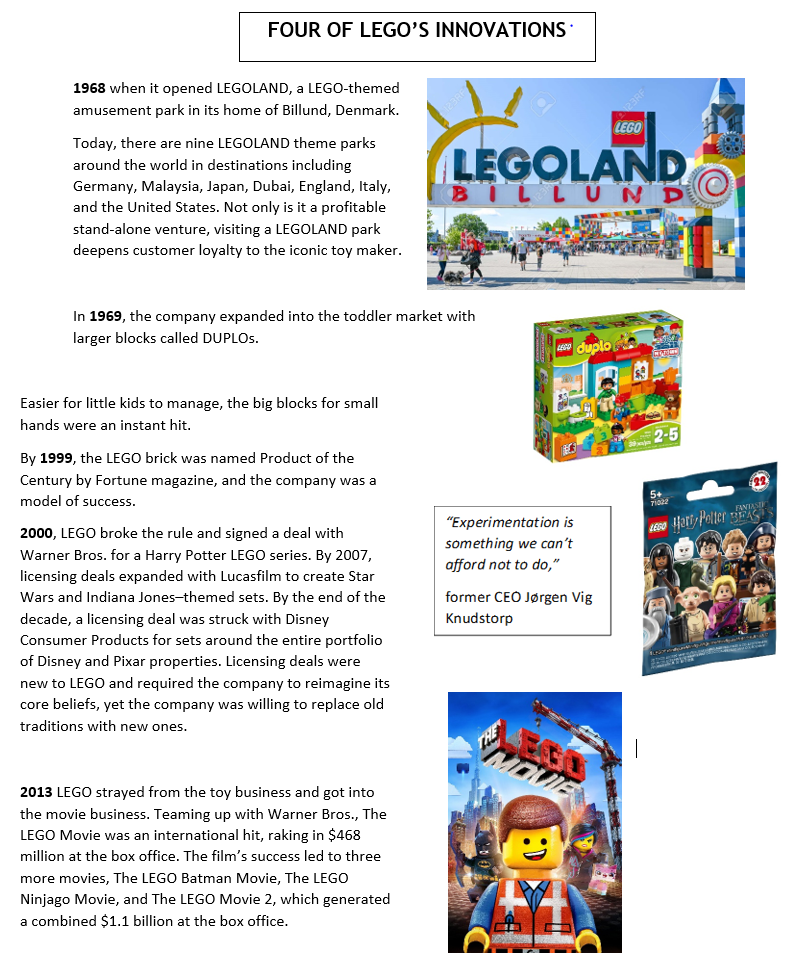 Instead of rushing back to his routine, he explored new trends in the toy industry, manufacturing, and childhood development. Kristiansen boldly reinvented his business, focusing on giving kids the opportunity to build their own toys instead of his finished products. In 1946, the company was the first in Denmark to purchase a newfangled contraption known as a plastic injection-molding machine to pursue a brand-new model.

By the end of the decade, LEGO had transformed from a wooden toy business into a producer of interchangeable plastic blocks, known as LEGO bricks.

What if the fire had not occurred?

LEGO Group’s greatest innovation may not be their modular plastic bricks but rather the company’s ability to reinvent itself on a continual basis. 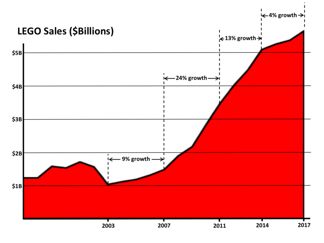 Linker shares how LEGO transformed itself many times. You can see some of the more recent innovations in the picture above. Read Why Lego became the Apple of toys and why I filled my ceiling with untouched Lego sets to discover more about LEGO, which reveals LEGO’s Core Purpose: ‘Inspire and develop the builders of tomorrow’

Who would argue they’re not achieving this? This graph shares their growth.  Truly it inspires their people!

Finally, if you’re a LEGO lover you may have already seen this YouTube video, Complete Tour of LEGO House in Denmark. What an amazing place to work! 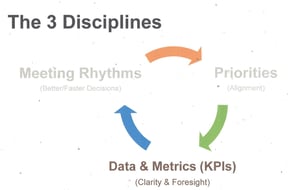 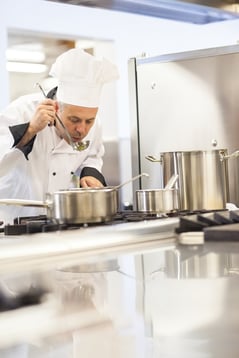