Driving culture throughout an organization is a teaching function. It’s not simply posting your vision and mission. You and your leadership team teach your people day after day after day, not by what you say, but how you act.

No matter how good your strategy is, or cash position, your people and culture drive execution. It’s why Jim Collins, states, “First WHO then WHAT,” in Good to Great. Culture is the reason your business will succeed or fail!

In Culture by Design: How to Build a High-Performing Culture, Even in the New Remote Work Environment David Friedman shares two definitions of culture in a company:

Culture is the commonly held set of values and principles that shows up in the everyday behavior of the people.

The first part of this definition is commonly held. Culture isn’t necessarily what the leader says it is, or what wishes it were. It’s the way most people in the group think, believe, act, and behave. 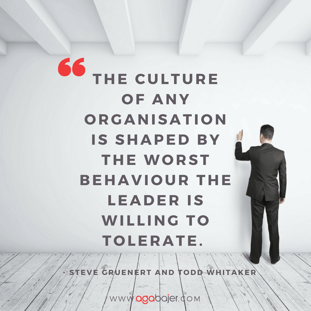 The second part of the definition suggests culture is rooted in behavior. Regardless of what people say they value or believe, what shows up in their behavior is the best indication of the true culture.

Culture is best recognized by looking at the actual behavior of your people.

Which led him to provide a simpler definition:

Culture is the set of principles that govern how people behave in a given context.

Friedman shares, “The idea of “context” is relevant because the same people will behave differently in different situations.  Think about how you might act differently at work than when you’re out with your friends or when you’re at church. Regardless of the context, though, culture is still all about behavior.”

Every group has a culture

Every organization has a culture. Whether you’re a customer or a new employee, as soon as you walk into a business, or even call a company, you get a feel for what it’s like.

Friedman’s observation: In every group, there tends to be one or more people who have a stronger personality than others. They’re natural leaders. They’re the alpha dogs. And by the energy of their personality, they usually have a disproportionate amount of influence over the group norms. They’re the ones who typically suggest where to meet for dinner and at what time, or how much to bet on the golf game. And everyone else tends to follow along. By the way, those with strong personalities aren’t necessarily the loudest ones. Some can be quietly influential, but they’re influential, nonetheless.

The same thing happens in companies.

Absent an intentional force on your part, your company culture is created, mostly influenced by those with the strongest personalities.

In Metronomics/3HAG Way Shannon Susko shares this same message on the importance of building your culture.

The Growth System Framework is focused on Culture in 3 specific systems, the Cultural System, Cohesive System, and Human System. A 4th system to build culture is the Coach cascade system. It’s the rebar that reinforces the whole house.

As shared in Metronomics: One United System to Grow Up Your Team, Company, and Life Shannon’s 4 systems focused on people and culture are: 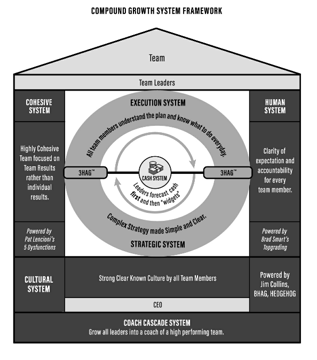 Cultural System: Foundation of Who then What from Jim Collins Good to Great including Core Values, Purpose, Profit per X and BHAG

Cohesive System: How to build a cohesive team powered by Patrick Lencioni’s 5 Dysfunctions of a Team

Human System: How you recruit, hire, coach, onboard (integrate) and train your team powered by Topgrading.

Coach Cascade System: Grow all leaders into coaches and their teams into high-performing teams. This is the secret sauce to create exponential momentum in the team’s high-growth results

Watch Shannon explain the intention of the House and your team in Metronomics:

Here is the resulting behavior you’ll see appear in your business by year two in the Metronomic Growth systems. 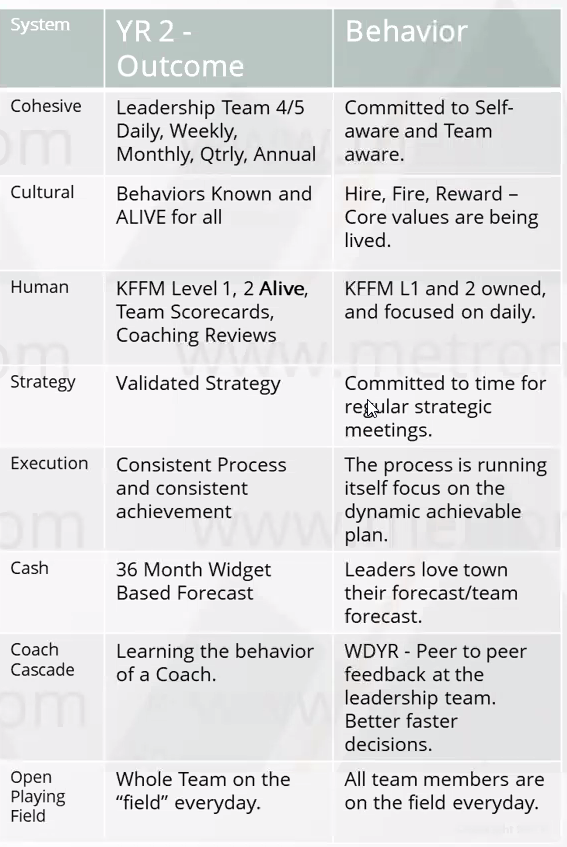 A plan for culture?

Why don’t most leaders create their cultures? Friedman suggests there are myriad reasons.

It’s seen as a “soft” issue. Most leaders are more comfortable talking about issues that seem more concrete—sales, operations, and finance. There are lots of things you can measure and track in these areas, so it’s easier to act and to see progress. How do you measure culture?

It’s seen as an HR topic. Many leaders see culture as the domain of the HR department and not the responsibility of the CEO. Culture has an enormous influence on differentiation, productivity, and performance. It’s really a strategic and financial topic more than an HR one. Friedman and Metronomics/3HAG Way, agree, culture is the most important responsibility of the CEO!

It’s less controllable. It’s relatively easy to create high-quality products and drive out variation in manufacturing processes. Getting people to be consistent, though, is much more difficult. People are variable. They bring a host of idiosyncrasies, issues, and challenges. This is enormously frustrating.

We never learned how. Most business schools teach leaders about marketing and strategic planning and finance, but not much about culture. We’re drawn to things we know, and comfortable with. We tend to avoid working on culture and stick to what we know.

It never occurred to us. Most leaders think of culture as something that happens on its own. It’s beyond writing your vision, mission, and values, and trying to set a good example. They feel there isn’t much they can do about it. It’s never occurred you can be as intentional and systematic about culture as you can about your sales plan or your financial forecast. Culture by Design: How to Build a High-Performing Culture, Even in the New Remote Work Environment provides a methodology for “engineering” culture. 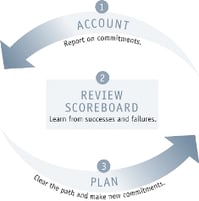 Positioning Systems helps mid-sized ($5M - $250M) business Scale-UP. We align your business to focus on.  Your One Thing! Contact dwick@positioningsystems.com to Scale Up your business! Take our Four Decisions Needs Assessment to discover how your business measures against other Scaled Up companies. We’ll contact you. 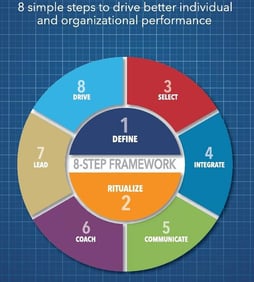 Next blog we’ll share David Friedman’s 8 steps to Define your Employee Behavior, from Culture by Design: How to Build a High-Performing Culture.