Why You Should Work Less.

Have you ever felt you work too much?

In Jeff Sutherland’s Scrum: The Art of Doing Twice the Work in Half the Time Sutherland reveals research that shows working over 40 hours is counterproductive.

Shocking right?  Indeed I can hear a lot of people reading this saying, how would I ever get everything done?  Who’s going to do this work if I don’t?  How can my business function if I don’t have people working 45, 50, 55 hours or more a week to get their jobs done?

Sutherland offers this story and research to prove less is more when it comes to work.

Scott Maxwell, the founder of the venture capital firm OpenView Venture Partner, initiated Scrum in his business Scott invited Jeff Sutherland for breakfast one morning to discuss Scrum, and while doing so shared an odd pep talk he received from Jon Katzenbach, then the director of McKinsey and Company (and now the author of several books and head of the Katzenbach Center at Booz Allen Hamilton) when he worked there in the early 1990’s.

Jon said when he started out back in the seventies, everyone worked seven days a week at McKinsey. It was expected. If you didn’t work that many hours, you were seen as not pulling your weight, not contributing to the team. For religious reasons Jon worked only six days a week.  He noticed something. Working fewer hours, he actually got more done than the guys working every single day. He decided to try only five days a week. He found he got even more done. Work too long, he said, and you get less done. He told Scott that he always wanted to drop down to four or even three days a week to see what would happen, but he wasn’t sure that the company would accept it.

Scott had scoffed at the idea at the time. Work fewer hours? Isn’t that slacking off?  The idea stayed with Scott for years, and as CEO and founder of OpenView Venture Partners he started investing in technology companies, some of which were doing Scrum.

OpenView started out  like a lot of high-powered offices. Ingrained in the corporate culture was the expectation that people would work late and on the weekends. These were aggressive, ambitious people. But they were getting burned out, depressed, and demoralized. It was such a tough environment that some people couldn’t take it and quit.

As the firm’s teams started working with Scrum, 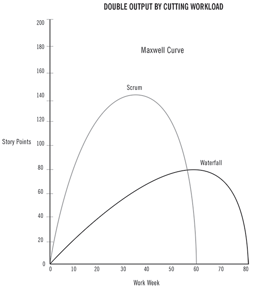 Scott noticed a shift in productivity. Working more hours stopped producing more output. He pulled me into his office one day and drew this curve on a whiteboard (see picture). The y-axis is productivity, and the x-axis is hours of work. You can see on the graph that peak of productivity actually falls at a little bit less than forty hours a week. Scott started to send people home early.

“It took them a while to get that I was serious,” says Scott. “But eventually they came around to my way of thinking.” He started telling people that working late wasn’t a sign of commitment; it was a sign of failure. “It’s not because I want you to have a balanced life,” he told people. “It’s because you’ll get more stuff done.” OpenView demands no more nights, no more weekends. When people go on vacation, they are expected to go on vacation, not check e-mail, not check in with the office. If you can’t actually take time off without having to make sure everything is going right at the office, the thinking goes, you aren’t managing your teams well.

Scott says the curve is different for different people, even for the same person at different times in their lives. “I’ve noticed as I’ve gotten older and in different roles that the peak output for me is at a lower number of hours than it was twenty years ago,” he says. Physical fitness, diet, personal issues, and other factors all play a role, he thinks. But he also believes that his output reaches its peak faster as he has grown and thought quite deeply about how to work. “I’ve been able to attack more and more important-impact opportunities.”

Work fewer hours, get more done? It doesn’t appear to be logical.  People who work too many hours start making mistakes.  As we discussed in Fix Now or Later it can actually take more effort to fix than to create.

Typically overworked employees get more distracted and begin distracting others. Then they make bad decisions.

Jon Katzenbach’s instincts were right. The disturbing evidence reveals that we have a very limited capability to make decisions, and the more energy-depleted we are, and the less downtime we get, the worse we are at

Bad decisions – we all want to avoid them. In April of 2011 Israeli researchers published research on what the biggest factor on why Israeli judges let prisoners go free or not. We’ve explored similar answers in LIE #4 – Willpower is Always on Will-Call and Willpower Rules Your Performance.  What the researchers discovered will astonish you.  Learn more on why working longer decreases productivity and judgement next blog.