LIE #4 – Willpower is Always on Will-Call

“Willpower is like gas in your car... . When you resist something tempting, you use some up. The more you resist, the emptier your tank gets, until you run out of gas.” Kathleen Vohs Prevention magazine, 2009

Is this how you think about will power?  Or, is it more likely you believe you have enough willpower to tackle anything.  In fact when you fail to get things done, you blame yourself for not having enough willpower don’t you? 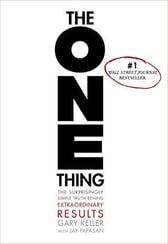 In case you’ve just joined these blogs we’re reviewing the Six Lies that keep us from achieving our One Thing from Gary Keller’s The ONE Thing: The Surprisingly Simple Truth Behind Extraordinary Results.

Keller shared six lies about success that keep us from living the One Thing:

Willpower is always on will-call.

Keller notes that for most of his life he never gave willpower much of a thought.  However once he did it captivated him.

Dictionary.com defines will power as: control of one's impulses and actions; self-control.

Keller puts it this way: Base it on training and it’s called discipline. But do it because you simply can, that’s raw power. The power of will.  It seemed so straightforward: invoke my will and success was mine. I was on my way. Sadly, I didn’t need to pack much, for it was a short trip. As I set out to impose my will against defenseless goals, I quickly discovered something discouraging: I didn’t always have willpower. One moment I had it, the next—poof! I didn’t.

What’s wrong with me? Was I a loser? Apparently so. It seemed I had no grit. No strength of character. No inner fortitude. Consequently, I gutted it up, bore down with determination, doubled my effort, and reached a humbling conclusion: willpower isn’t on will-call. As powerful as my motivation was, my willpower wasn’t just sitting around waiting for my call, ready at any moment to enforce my will on anything I wanted. I was taken aback. I had always assumed that it would always be there. That I could simply access it whenever I wanted, to get whatever I wanted. I was wrong. Willpower is always on will-call is a lie.

How hard is it to have willpower and what does it mean if you have greater willpower?

Keller refers to several experiments on willpower on the book the most famous being the Stanford marshmallow experiment.  We referred to it previously in Willpower Rules Your Performance. We referenced another exceptional book on willpower, discipline and habits, Charles Duhigg’s The Power of Habit.

How important is willpower?  A experiment in the 1960’s at Stanford university with a group of four-year-olds suggests it’s a major determinant of success.

The four year olds were offered a marshmallow right away, or if they waited a few minutes, they could have two marshmallows.   30% of the children managed to wait and double their treats when the researchers came back in 15 minutes.  Have some fun and watch the short 3:27 video.

Years later when these students were tracked down in high school, the researchers discovered the grades, SAT scores, the ability to maintain friendships and the capacity to “cope with important problems,” was highest in those four year olds who had delayed their gratification the longest.  They had the best grades and SAT scores were 210 points higher than the other students. In addition they were more popular and did fewer drugs.

The marshmallow ignoring children had self-regulatory skills that gave them an advantage throughout their lives.

Our brain is only l/50th of our body mass yet it consumes a staggering 1/5th of the calories we burn for energy. Keller points out that if your brain were a car, in terms of gas mileage, it’d be a Hummer.

Another Stanford University study shows just how fleeting our willpower can be. Stanford University professor Baba Shiv’s divided 165 undergraduate students into two groups. They were asked to memorize either a two-digit or a seven-digit number. Once the students had memorized the number, they would go to a room to recall the number. Along the way, they were offered a snack for participating. Their two choices:  chocolate cake or a bowl of fruit salad—(guilty pleasure or healthy treat). The Result? The students asked to memorize the seven-digit number were nearly twice as likely to choose cake. The conclusion: a tiny extra cognitive load is enough to prevent a prudent choice. The implications?  STAGGERING! The more we use our mind, the less minding power we have left. Willpower is like a fast-twitch muscle that gets tired and needs rest. It’s incredibly powerful, but it has no endurance. In fact, a measly five extra digits is all it takes to drain our willpower dry.

While decisions tap our willpower, the food we eat is also a key player in our level of willpower.

Another study in 2007 participants who exercised willpower showed a marked drop in the levels of glucose in the bloodstream.  Between tasks, one group was given a glass of Kool-Aid lemonade sweetened with real sugar (buzz) and the other was given a placebo, lemonade with Splenda (buzzkill). The placebo group had roughly twice as many errors on the subsequent test as the sugar group.

Willpower is a mental muscle. It doesn’t bounce back quickly. Employ it for one task and you have less willpower available for the next unless you refuel. To do our best, we literally have to feed our minds. This gives new credence to the old saying, “food for thought”.  Foods that elevate blood sugar evenly over long periods, like complex carbohydrates and proteins, become the fuel of choice for high-achievers—literal proof that “you are what you eat.”

In discussing THE One Thing in our public and private workshops, along with prioritizing, we consistently recommend working on your One Thing first thing in the morning.

In fact we recommend eliminating distractions, closing the door and investing the first hour of the day on your One Thing for that day, or the year or quarter.

We are interrupted every 7 minutes.  We lose focus 7x a minute, and  it requires 23 minutes to get up to speed on anything.

Here are some things to be aware of that Tax Your Willpower:

Without realizing it we engage in activities that diminish our willpower. Willpower is depleted when we make decisions to focus our attention, suppress our feelings and impulses, or modify our behavior in pursuit of goals.

When it comes to willpower, timing is everything. You need your willpower at full strength to ensure when you’re doing the right thing; don’t let anything distract you. You need enough willpower for the rest of your day to support or avoid sabotaging what you’ve done.

Really, that’s all the willpower you need to be successful.

Want to get the most out of your day?  Do your most important work—your ONE Thing—early, before your willpower is drawn down. 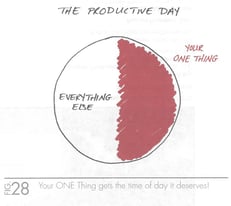 Your self-control is being sapped throughout the day.  Use it when it’s at full strength on what matters most.

Keller ends this chapter with the following BIG IDEAS :

Don’t fight your willpower. Build your days around how it works and let it do its part to build your life.

Did you know that nothing ever achieves absolute balance?  That’s right nothing.  Next blog I’m about t0 bash the idea that living a balanced life is both realistic and even a good idea.