When should you fix problems in your business?

Should you fix them immediately or wait until your project or initiatives is done and then go back and fix the problems?   In your business who has the power to change and fix problems when they arise?

If you’re fixing problems at the wrong time, if you’re waiting for a supervisor/manager to fix it, you’re paying a very high price for your poor timing.

In Jeff Sutherland’s Scrum: The Art of Doing Twice the Work in Half the Time Sutherland examines the nature of mistakes and why you need to fix them as quickly as possible.

In The Machine That Changed the World, Dr. James Womack, the founder of the Lean Enterprise Institute at MIT, author of different books on Lean manufacturing, tells a story about the perils of “re-work.” 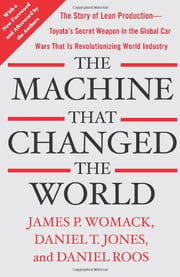 Womack and his team looked at the manufacturing of cars to determine why some companies made cars faster and with fewer defects.  Jim’s work on lean manufacturing is used by almost every manufacturing business.  At the time he wrote the book, things were much different.

Womack discovered the biggest differences in the luxury-car market. In Japan, such companies as Toyota, Honda, and Nissan spent an average of 16.8 hours making a luxury car. Parts went in at one end of the factory, and, about 17 hours later, a Lexus emerged. And they had 34 defects per hundred vehicles.  In Europe Mercedes-Benz, Audi, and BMW took 57 hours to make a car. The results - 78.7 defects for every hundred vehicles.

Why did it take the Europeans so long? And why so many defects? BMW isn’t exactly known for making crappy cars. Here’s why: In a Toyota plant when a problem shows up on the line, every worker has the ability to stop the whole line. When that happens, everyone swarms around where the line stopped—not to yell at the guy for stopping the line, but to fix whatever problem is there. They don’t want any cars coming out the other end with things that have to be fixed. They fix the problem once, and it’s solved forever. If they don’t, that same defect could go into hundreds of vehicles.

At European luxury-car makers there was a different way of doing things. At the end of the production line were dozens of people in white lab coats going around fixing all the problems. They made sure the car door had that BMW clunk when the door closed, or the engine purred with exactly the right tone. They made sure all the parts meshed together properly. They viewed themselves not as manufacturers but as craftsmen, artisans making a thing of beauty. That’s great when you’re making a few cars, but when you’re making millions, those costs add up.

Womack notes the irony of this in his book: … the German plant was expending more effort to fix the problems it had just created than the Japanese plant required to make a nearly perfect car the first time.

The Germans spent more time fixing a car they’d just made than the Japanese did making one in the first place.  Perhaps this is the reason Toyota is the number one car manufacturer on the planet. They get it right the first time.

Many of you probably don’t recall a company called Palm.  They were one of the first to create something called Personal Digital Assistants (PDA’s).  We call these cell phones now!  They tracked everything in their manufacturing process automatically. Of the many things they measured, one was how long it took to fix a bug. How much time did it take a software developer to fix a problem he’d introduced into the system. Their computers tracked this automatically, each and every time.

Sutherland shares this example: So let’s say that one day, when the testers tried to integrate Matt’s code into the rest of the system, they detected a bug. Matt, like most software developers, wouldn’t want to go back and fix that code right away. Instead, he’d vow to get to it later. First, he’d write new code. In most companies this kind of testing doesn’t even happen on the same day. It could be weeks or months before all the code is tested, and only then are the problems discovered. But Palm performed daily, automated tests of all their code, so they knew right away when there was a problem.

They looked at the “Matts” across the entire company—hundreds of developers—and they decided to analyze how long it took to fix a bug if they did it right away versus if they tried to fix it a few weeks later.

Sutherland then asks: What do you think was the difference?

The Limits of our Minds

Our human mind has limits. We’ve repeatedly addressed the idea of Focus on choosing One Thing.  Our mind can only remember so many things; we can really only concentrate on one thing at a time.

Because of this tendency the process of fixing things gets harder as more time elapses.

Sutherland offers this explanation: When you’re working on a project, there’s a whole mind space that you create around it. You know all the different reasons why something is being done. You’re holding a pretty complicated construct in your head. Re-creating that construct a week later is hard. You have to remember all the factors that you were considering when you made that choice. You have to re-create the thought process that led you to that decision. You have to become your past self again, put yourself back inside a mind that no longer exists. Doing that takes time. A long time. Twenty-four times as long as it would take if you had fixed the problem when you first discovered it.

Remember the lesson your mother taught you as a child: Do things right the first time. When you do make a mistake—and we all make them—fix it as soon as you notice it. If you don’t, you’ll pay for it.

In Strategic Discipline and the Rockefeller Habits meeting rhythms, daily huddles, and weekly meetings are great for identifying issues as quickly as possible.  If you wait until a weekly to solve and fix a problem, Sutherland would say you’re too late.  It’s going to cost you!

Use your weekly huddle’s Collective Intelligence to discuss how quickly errors get fixed in your business.  Does it require one person, or a supervisor to fix errors?  Do you fix errors immediately or do your people on the front lines need to get approval from their supervisor?

Consider the examples here from Scrum and discuss how you can make changes to improve your productivity.

Are you a workaholic?  Next blog we examine why less is more for you and your co-workers in terms of your work week.  Get ready to learn how working less means greater productivity.