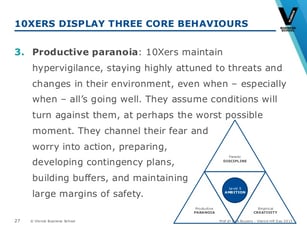 In Great by Choice Jim Collins asks and answers: Why do some companies thrive in uncertainty, even chaos, and others do not?

Great by Choice signature story (and the beauty of all of Collins books are the stories and examples he weaves into his book to validate his answers) is Roald Amundsen’s teams battle to beat Robert Falcon Scott’s team to the South Pole. If you are unfamiliar with this story, read HBR’s What It Takes to Win: Extreme Lessons from Polar Explorers 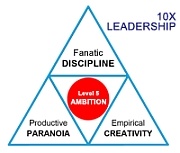 10Xers display three core behaviors, in combination, distinguishing them from the leaders of the less successful comparison companies:

One of the reasons I share this principle is my experience with my customers. These three core behaviors are the source of success and also the source of discourse with the leaders I coach.

Productive Paranoia is often the most irritating of these core behaviors to the companies leadership team and to the staff who work for them. 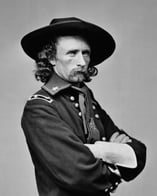 Kevin Sharer of Amgen, (another leadership example Jim Collins shares in Great by Choice) put a portrait of General George A. Custer (who led his troops to calamity at Little Big Horn) in his office to remind himself that overconfidence leads to doom.

Each of my current customer’s leaders display this behavior, to the frustration and happiness of their companies success!

In Great by Choice Collins notes this about 10X leaders, “On the one hand, 10Xers understand that they face continuous uncertainty and that they cannot control, and cannot accurately predict, significant aspects of the world around them. On the other hand, 10Xers reject the idea that forces outside their control or chance events will determine their results; they accept full responsibility for their own fate.”

This I believe sums of the value of the core behavior Productive Paranoia.

“Fear should guide you, but it should be latent,” Microsoft’s Bill Gates said in 1994. “I consider failure on a regular basis.”

By embracing the myriad of possible dangers, leaders put themselves in a superior position to overcome danger.

Examine the graphic here to see how Amundsen prepared for the worse, versus Scott who all but ignored it.

In his final push for the South Pole, Amundsen carried enough extra supplies to miss every single depot and still have enough left over to go another hundred miles. Scott ran everything dangerously close to his calculations, so that missing even one supply depot would bring disaster.

A single detail aptly highlights the difference in their approaches: Scott brought one thermometer for a key altitude-measurement device, and he exploded in “an outburst of wrath and consequence” when it broke; Amundsen brought four such thermometers to cover for accidents

Amundsen presumed bad events might strike his team somewhere along the journey and he prepared for them, even developing contingency plans so that the team could go on should something unfortunate happen to him along the way.

Facing the same environment, the causes of their respective success and failure wasn’t the environment. They had divergent outcomes principally because they displayed very different behaviors.

Here’s the key: 10Xers differ from their less successful comparisons in how they maintain hypervigilance in good times as well as bad. Even in calm, clear, positive conditions, 10Xers constantly consider the possibility that events could turn against them at any moment. Indeed, they believe that conditions will—absolutely, with 100 percent certainty—turn against them without warning, at some unpredictable point in time, at some highly inconvenient moment. And they’d better be prepared.

10Xers distinguish themselves not by paranoia per se, but by how they take effective action as a result. Paranoid behavior is enormously functional if fear is channeled into extensive preparation and calm, clearheaded action, hence our term “productive paranoia.”

Productive paranoia isn’t just about avoiding danger, trying to find the safest and most enjoyable path through life; 10Xers seek to accomplish a great objective, be it a goal, a company, a noble ambition to change the world, or a desire to be useful in the extreme. Indeed, as an overall life approach, they worry not about protecting what they have, but creating and building something truly great, bigger than themselves,

Because of a deeply attractive form of ambition: 10Xers channel their ego and intensity into something larger and more enduring than themselves. They’re ambitious, to be sure, but for a purpose beyond themselves, be it building a great company, changing the world, or achieving some great object that’s ultimately not about them

This same truth is evident in the business leaders I coach.

Preparation is a specific objective of Annual and 3-5 year planning in our Strategic Discipline and Scaling Up coaching practices.  Interested in achieving successful growth with your business? Contact dwick@positioningsystems.com. 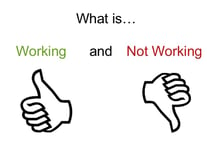 WHAT WORKING – WHAT’S NOT – NEXT BLOG

Strategic Discipline’s monthly meeting, customers share what’s working, and what’s not.  These issues and topics often are discussed in Learning, Planning, Solving segment of the monthly meeting.  Last week a customer shared a key working principle leading to the core behavior of Empirical creativity. We examine this next blog.