In How Originals Identify Innovative Ideas I promised to share ideas on how you can improve your batting average to generate innovative products and services for your business. 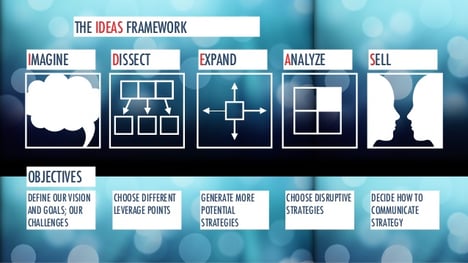 In Kaihan Krippendorff’s Outthink the Competition: How a New Generation of Strategists Sees Options Others Ignore, he provides these 5 steps to achieving Disruptive Innovations.

How to Eliminate Bias in Winning Moves?

To improve your ability to choose winning moves you need to overcome your bias. How do you achieve this?

Creators are terrible at judging how their performances do with the test audiences.

Social scientists have long known that we tend to be overconfident when we evaluate ourselves. Here are some highlights from their findings:

Do you consider yourself in the genius category?

Even geniuses misjudge their talent.  Psychologist Dean Simonton, whose career studies creative productivity, discovered Beethoven, Shakespeare, Picasso, and Edison, had difficulty recognizing when they had a hit on their hands. Beethoven was known as a perceptive self-critic, yet as Simonton observes, “Beethoven’s own favorites among his symphonies, sonatas, and quartets are not those most frequently performed and recorded by posterity.” In Originals Grant notes, “In one analysis, psychologist Aaron Kozbelt pored over letters in which Beethoven evaluated seventy of his compositions, comparing those appraisals to expert judgments of Beethoven’s works. In that set of seventy, Beethoven committed fifteen false positives, expecting pieces to be major that turned out to be minor, and only eight false negatives, criticizing pieces that ended up becoming highly valued. This 33 percent error rate occurred despite the fact that Beethoven made many of his assessments after receiving audience feedback.”

When Picasso painted his famous Guernica in protest of fascism, he produced seventy-nine different drawings. Many of the images in the painting were based on his early sketches, not the later variations. “The subsequent sketches proved to constitute ‘blind alleys’ in which the artist did not know in advance that he was taking the wrong track,” Simonton explains. If Picasso could judge his creations as he produced them, he would get consistently “warmer” and use the later drawings. In reality, it was just as common he got “colder.”

You’re probably familiar with a small number of Shakespeare’s classics.  In the span of two decades, Shakespeare produced 37 plays and 154 sonnets. Simonton tracked the popularity of Shakespeare’s plays, measuring how often they’re performed and how widely they’re praised by experts and critics. In the same five-year window that Shakespeare produced three of his five most popular works—Macbeth, King Lear, and Othello, he also produced average titles,  Timon of Athens and All’s Well That Ends Well, which rank among the worst of his plays.

Simonton reports the most prolific people not only have the highest originality; they also generate their most original output during the periods in which they produce the largest volume. Between the ages of thirty and thirty-five, Edison pioneered the lightbulb, the phonograph, and the carbon telephone. But during the same period, he filed well over one hundred patents for other inventions, few that ever became successful. 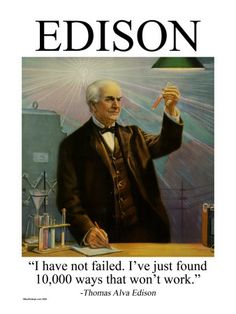 Thomas Edison noted, “To get a great idea, come up with lots of them.”

Conclusion: “The odds of producing an influential or successful idea,” Simonton notes, are “a positive function of the total number of ideas generated.”

It’s widely assumed that there’s a tradeoff between quantity and quality, “if you want to do better work, you have to do less of it.”

This turns out to be false.

In fact, when it comes to idea generation, quantity is the most predictable path to quality. “Original thinkers,” Stanford professor Robert Sutton notes, “will come up with many ideas that are strange mutations, dead ends, and utter failures. The cost is worthwhile because they also generate a larger pool of ideas—especially novel ideas.”

The Ideas Framework for the Outthinker Process, step two and three are Dissect and Expand. Krippendorff intentionally asks you to dissect 5-8 different strategies and tactics, each time requiring your team to develop 5 different ideas for each strategy.  A small team of 4 will generate 20 ideas for each of these strategies, producing a minimum of 100 ideas.  If you’re team is creative, it can be much more. 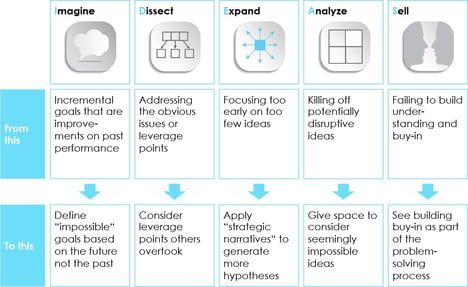 In Dissect and Expand, you’re achieving lots of ideas, to reduce your bias, boosting the probability of producing a winning move.

Positioning Systems helps mid-sized ($5M - $250M) business Scale-UP. We’re experts at helping you determine Your One Thing!  We’ll help your leadership team learn best practices, like the Outthinker Process. To achieve growth, you need to evolve in today’s rapidly changing economic environment.  Are you avoiding a conversation with yourself on how to can grow your business? Contact dwick@positioningsystems.com to Scale Up your business! Take our Four Decisions Needs Assessment to discover how your business measures against other Scaled Up companies. We’ll contact you.

Next Blog – Kissing a Lot of Frogs

“You gotta kiss a lot of frogs, before you find a prince.” Too much experience tends to detract our ability to judge our ideas accurately. There is one group of forecasters who come close to attaining mastery. How to get your team in the proper mindset to generate more and better ideas, next blog.