What Browser do you use?

Suppose you could ask a prospective employee a question to discover whether the candidate is likely to stay in your employ longer, be more productive, and absent less?

What question can possibly provide all that?

QUESTION: What browser do you use on your PC or Mac?

Firefox and Chrome ANYONE?

In Originals, Adam Grant, shares economist Michael Housman recent study to discover why some customer service agents stay in their jobs longer than others. Research from thirty thousand employees handling calls for banks, airlines, and cell-phone companies, Housman’s suspected he would discover telltale signs about their commitment.

Some of his suspicions included:

When those obvious clues didn’t reveal anything, Housman noticed his team captured information about which internet browser employees used when they logged in to apply for their jobs. On a whim, he tested whether it might be related to quitting. He didn’t expect to find anything. He assumed browser preference is purely a matter of taste. But when he looked at the results, he was stunned:

CRITICAL DETERMINANT OF “A” PLAYERS - RESOURCEFULNESS

The browser isn’t what causes them to stick around, show up dependably, and succeed. It’s what their browser preference signals about their habits.

Why are the Firefox and Chrome users more committed and better performers on every metric?

The obvious answer you might believe is they’re more tech savvy.  At Adam Grant’s urging, he asked Housman to explore that.

All employees took a computer proficiency test. The Firefox and Chrome group didn’t prove significantly more computer expertise, nor were they faster or more accurate typists.

Technical knowledge and skill was not the source of their advantage. What made the difference was how they obtained the browser.

If you own a PC, Internet Explorer is built into Windows. If you’re a Mac user, your computer came preinstalled with Safari. Almost two thirds of the customer service agents used the default browser, never questioning whether a better one was available. To get Firefox or Chrome, you have to demonstrate some resourcefulness and download a different browser. Instead of accepting the default, you take a bit of initiative to seek out an option that might be better. And that act of initiative, however tiny, is a window into what you do at work.  (Resourcefulness you should recall is the dominant characteristic of A Players in Topgrading.)

The customer service agents who accept the defaults of Internet Explorer and Safari approach their job the same way. They stay on script in sales calls and follow standard operating procedures for handling customer complaints. They see their job descriptions as fixed. When unhappy with their work, they start to miss days, and eventually just quit.

Employees who took the initiative to change their browsers to Firefox or Chrome approach their jobs differently. They look for novel ways to sell customers and address concerns. When they encounter a situation they don’t like, they fix it. By taking the initiative to improve their circumstances, they have little reason to leave. They create the jobs they want. 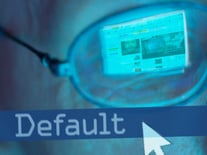 WHAT CHOOSING THE DEFAULT SAYS

We live in an Internet Explorer world. Just as almost two thirds of the customer service reps used the default browser on their computers, many of us accept the defaults in our own lives. In a series of provocative studies, a team led by political psychologist John Jost explored how people responded to undesirable default conditions. Compared to European Americans, African Americans were less satisfied with their economic circumstances but perceived economic inequality as more legitimate and just. Compared to people in the highest income bracket, people in the lowest income bracket were 17 percent more likely to view economic inequality as necessary.

Grant notes, “Justifying the default system serves a soothing function. It’s an emotional painkiller: If the world is supposed to be this way, we don’t need to be dissatisfied with it. But acquiescence also robs us of the moral outrage to stand against injustice and the creative will to consider alternative ways that the world could work.”

“People who suffer the most from a given state of affairs are paradoxically the least likely to question, challenge, reject, or change it.” Political Psychologist John Jost.

When we become curious about the dissatisfying defaults in our world, we begin to recognize that most of them have social origins: Rules and systems were created by people. This awareness gives us courage to consider how to change!

The hallmark of originality is rejecting the default to explore whether a better option exists.

Originals are people who take the initiative to make their visions a reality.

The concern here is how do we get more originality out of the people already working for us? We’ll explore this in another blog.  Adam Grant feels it’s easier than you might think.

Getting the People Decision right in your company results in a harmonious culture of accountability.  Now where is this more important than at the leadership level.  Several of my customers are working with my facilitation through Patrick Lencioni’s 5 Dysfunctions of a team.  Next blog we’ll explore what they’ve discovered.