It was a common theme among all the presenters at the Scale Up Fortune Sponsored Growth Summit in Atlanta last week. This echoes the blogs we’ve written on Scrum, especially Change or Die, Aligned for Change, and Change or Die Part II.

The magnitude of this idea to change, what it looks like, how to accomplish it, every Presenter addressed directly or indirectly.

Change often brings with it a need to discover and better understand how to win. 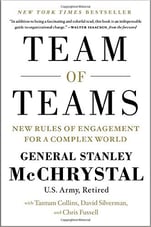 offered this story to exemplify the change that is occurring in the world, and which has taken place countless time in the past.

His example to our audience is from the French and Indian War.  He offers more examples in his book, Team of Teams: New Rules of Engagement for a Complex World.

It’s the summer of 1755 General Edward Braddock gathers his troops, 2100 strong (including George Washington as a volunteer officer), with an advance group of 300 axe men to forge a path to Monongahela River and Fort Duquesne (Now Fort Pitt) on July 9, 1755.  He intends to rely on the discipline and training of his British Soldiers, who won countless engagements with these exact tactics across Europe. Wikipedia explains the results of the battle in much the same manner as General McChrystal did Tuesday morning at the Summit:

Although the initial exchange of musketry favored the British, felling the French commander and causing some Canadian militia to flee, the remaining Indian/French force reacted quickly, running down the flanks of the column and putting it under a 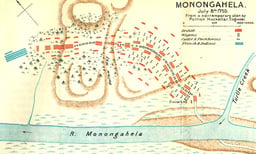 murderous crossfire. Braddock's troops reacted poorly and became disordered. The British attempted retreat, but ran into the rest of the British soldiers left behind from earlier. Braddock, rallying his men time after time, fell at last, mortally wounded by a shot through the chest. Although the exact causes of the defeat are debated to this day, a contributing factor was likely Braddock's underestimation of how effectively the French and Indians could react in a battle situation, and how rapidly the discipline and fighting effectiveness of his own men could evaporate

What Wikipedia leaves out is that the Indians, allied with the French, didn’t want to fight at all.   To inspire and enjoin camaraderie between his French and Canadian troops with the Indians, the French commander put on Indian garb the morning of the battle, to galvanize the relationship between the two disparate allies.

The British tactics of massed forces in a line firing upon the enemy worked at forces, but the French and Indians quickly responded and began to attack the British flanks were they were weaker and couldn’t adjust to their enemies tactics.

General Edward Braddock lost the battle, and his life, in McChrystal’s expert view because his troops were unsuited for the conditions he faced.

Many businesses are losing the battle because their organization fails to adapt to the new conditions in the marketplace where top down decision making is simply too slow to achieve results.

Understand How You Win

General McChrystal and his team discovered in Iraq as Commander of JSOC from 2003 to 2008 that despite better training, weapons, discipline, air strike capabilities and even numerical superiority they were losing the fight against Abu Musab al-Zarqawi, leader of Al-Qaeda in Iraq.  Al-Qaeda had adapted to the US’s earlier strategy, becoming more agile and less reliant on leadership.  Previously cutting off their leaders disrupted and stagnated Al-Qaeda.  Under Abu Musab al-Zarqawi, no matter what JSOC did, Al-Qaeda was back quickly with more terrorist acts to cause further devastation to the US’s plan.

What McChrystal discovered, just like General Braddock his troops, and perhaps more importantly his command structure was unsuited for the conditions he faced.

One of the key attributes of humans is our ability to recognize patterns.  McChrystal and his team looked for patterns in Al-Qaeda in Iraq.  They immediately recognized they were seeing something different.  It was a network of terrorism without any control or command.  If you’re unfamiliar with the value of Pattern Recognition in your business check out Pattern Recognition – Meeting Rhythm Discipline and Why Meeting Rhythms are a Critical Strategic Discipline.

Here were some of the key patterns that emerged when they looked at this new enemey:

JSOC conducted a daily huddle, much as Positioning Systems recommends.  Daily huddles were a video teleconference for 30 minutes involving 50 people (that’s a large group to do a daily huddle with!).

To meet this new enemy they changed their Daily Huddle 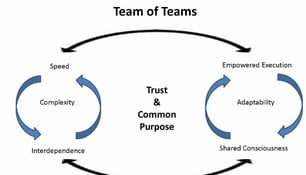 to include 7500 people extending the meeting to 90 minutes.  Instead of making it briefing it was sharing.  McChrystal called it “Shared Consciousness.”

The meeting shared best practices.  Most importantly it built trust which only comes through interaction.

In 2003 when McChrystal started JSOC was doing 1 raid a week or 4 per month.  All raids needed McChrystal approval. The result:  They were losing the war!  In August of 2004 they’d increased this to 18 raids a month or one every other night, yet the result was they were still falling behind.  By 2006 they’d finally reached a pace to defeat the enemy.  This required 300 raids per month, 10 per night, with no approval necessary from McChrystal.

By moving the decision-making to the lowest level on your team you help your team make faster, better, more immediate decision that impacts the results of your team.  It helps you win.

As Verne’s video’s from the Growth Summit are completed and put on line I plan to update this blog and others to provide additional context to each post.  I’m reading McChrystal’s Team of Teams to gain insights for my customers, so plan on seeing more from McChrystal and this concept in the near future.

Jim Whitehurst author of the Open Organization had some interesting points in his presentation, perhaps none more important than making sure your team understands exactly How you Win.  His story about his COO tenure at Delta is especially revealing on why communicating your ONE THING is critical.