We are all mortal. We all die someday.

How seldom we realize it.

A sense of mortality hovers over our every effort.

Our time is limited.  Isn’t the greatest of crimes to waste it? 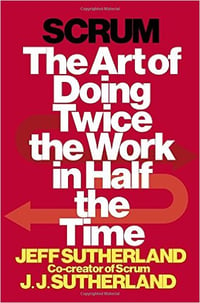 We’ve been discussing Jeff Sutherland’s Scrum: The Art of Doing Twice the Work in Half the Time.

Scrum creates a different kind of pattern. It accepts that we’re habit-driven creatures, seekers of rhythm, somewhat predictable, but also somewhat magical and capable of greatness. Sutherland’s thoughts behind creating Scrum were:  “What if I can take human patterns and make them positive rather than negative? What if I can design a virtuous, self-reinforcing cycle that encourages the best parts of ourselves and diminishes the worst?”

Scrum’s daily and weekly rhythms are comparable to Gazelles’ and Strategic Disciplines’ weekly meeting rhythms.   Sutherland offers his intention in doing so, “I was striving for was to offer people the chance to like the person they see in the mirror.”

How many times would you like to feel that? Wouldn’t it be great if your work, and the work your team shares and does every day would make them feel, “I like myself!”

How productive do you feel you and your employees are?  Sutherland offers this story about an interview he conducted at his company:

The other day I was interviewing someone for a job at Scrum, Inc., and I asked why he wanted to work in a Scrum company. He told me a story. He worked at a company that put out textbooks and ancillary products like workbooks, course materials, presentations, etc. His job was to identify leading scholars in a particular field and work with them to produce these products. In a way it was exciting. He was a history major, a scholar of the American Colonial period, and he had a chance to work with some of the leading minds in his field. “I worked for a year,” he said. “A year spent developing dozens of different products. At the end of the year, we reviewed for the first time what we’d accomplished. And fully half of the work I’d done over the past year was thrown away. Not because it wasn’t good, but because the market wasn’t there, or direction had changed. Six months of my life were completely and totally wasted.” At that point a certain indignation and anger crept into his voice. And then determination. “I hope that Scrum won’t let that happen, that my work will have purpose, that what I do will actually matter.”

Sutherland offers that you might think this is an extreme example. Fifty-percent waste. In the work he does with company he finds this is actually pretty good. Sutherland usually finds about 85 percent of effort is wasted. Only a sixth of any of the work done actually produces something of value.

Here’s the disappointing truth in those numbers.  Deep within ourselves, as we repeat the rhythm of our days, we know that’s true. That’s why we all laugh, a bit nervously, at jokes about the inherent insanity and wastefulness of life in a modern corporation.

The reality is it shouldn’t be funny. It should be shameful. We should mourn the lives and potential we’re wasting. Toyota’s Taiichi Ohno in the first chapter of his  book, Toyota Production System (TPS), states, “Waste is a crime against society more than a business loss.” His thoughts about waste deeply influenced Sutherland in his creation of Scrum.

Time is the ultimate limiter of human endeavor, affecting everything from how much we work, to how long things take, to how successful we are.

Sutherland argues that while he has nothing against promotions, sales, or projects, it’s just a fact that we humans are absolutely terrible at working that way. We’re lousy focusers, we spend far more hours in the office than needed, and we’re horrible estimators of how long things will take.

In working with our Gazelles customers we consistently see the axiom that we believe we can achieve more in the short term and less in the long term.  This means most companies attack more in a quarter then they can conceivably achieve. It usually requires a couple of quarters of failing to achieve all the company objectives before everyone on the leadership team grasps the idea of “less is more!”

Does your business set up feedback cycles when working on a project?  Sutherland sees this happen all the time: a company will spend years on a project that seemed like a good idea when the workers started on it, but by the time they cross the finish line, the market has fundamentally changed. The sooner you give things to your customers, the quicker they can tell you if you’re making something they need. And this goes for those internal projects as well.

How often has a project started for your internal operations and when completed it is not what your team wanted?

In Scrum every project has a board divided into three columns: Backlog … Doing … Done. Each Sprint, the Backlog column has as many Post-its as the team thinks it can get done that week. As the week goes by, a member of the team will take up one of those tasks and move the sticky to Doing. When it’s finished, it’ll get moved to Done. Everyone on the team can see what everyone else is working on at every moment.

An important point: nothing gets moved to Done unless it can be used by the customer, this means if it’s an internal project, the customer is you! Sprints are what are often called “time boxes.” They’re of a set duration. You don’t do a one-week Sprint and then a three-week Sprint. You have to be consistent. You want to establish a work rhythm where people know how much they can get done in a set period of time. Often that quantity surprises them. One crucial element of an individual Sprint, though, is that once the team commits to what they’re going to accomplish, the tasks are locked in. Nothing else can be added by anyone outside the team. Interfering and distracting the team slows its speed dramatically.

What Scrum does is alter the very way you think about time. After engaging for a while in Sprints and Stand-ups, you stop seeing time as a linear arrow into the future but, rather, as something that is fundamentally cyclical. Each Sprint is an opportunity to do something totally new; each day, a chance to improve. Scrum encourages a holistic worldview. The person who commits to it will value each moment as a returning cycle of breath and life.

Time Is Finite. Treat It That Way. Break down your work into what can be accomplished in a regular, set, short period—optimally one to four weeks. And if you’ve caught the Scrum fever, call it a Sprint.

Demo or Die. At the end of each Sprint, have something that’s done—something that can be used (to fly, drive, whatever). Throw Away Your Business Cards. Titles are specialized status markers. Be known for what you do, not how you’re referred to.

Everyone Knows Everything. Communication saturation accelerates work. One Meeting a Day. When it comes to team check-ins, once a day is enough. Get together for fifteen minutes at the Daily Stand-up, see what can be done to increase speed, and do it.

We’ll look at the Scrum Daily Stand Up Huddle and how it compares to our Gazelles Daily Huddle in our next blog.