Who do you hire?

People who achieve the most in the shortest amount of time? Isn’t that your objective when interviewing?  Find people who efficiently get things done.

At Yale University a computer-programming course taught by Professor Stanley Eisenstat is notoriously hard. Students complain how long each assignment takes.  Professor Eisenstat started tracking how long each student needed to complete them. Joel Spolsky, who owns a software business, a student of Eisenstat’s in the 1980s, compared the data to the actual grades people received. Was there any correlation between the time spent on a project and the grade the student received, Spolsky wondered?

There simply isn’t any correlation between the time spent on a project and the grade the student received. Some people work quickly and get an A, and some people work meticulously and get the same grade. The only difference is the amount of time spent.

How do you apply this to your business? If you’re a manager, you want to hire not just the workers who earn A’s, but those who earn them in the shortest amount of time.

In the Yale study, the fastest students outpaced their slow compatriots by a ratio of 10:1. Ten times faster! And they got just as good a grade. Ten times faster is pretty dramatic, right? You’d believe then companies should focus on hiring the quickest people and weeding out the slow-footed. This would greatly support Gazelles emphasis for Topgrading – hiring the top 10% of the talent pool for every position in your company.

While this sounds like the best approach to increase productivity, other factors can be even more crucial.

If individuals perform 10x faster than their classmates would you expect a similar ratio with teams?  In research at 3800 different projects, ranging from work done at accounting firms to software development for battleships to tech projects at IBM, they looked not at individual performance but at team performance.  The results are surprising, if not startling.

If the best team could perform a task in one week, how long would it require for the worst team?

Would your guess be the same ratio as observed at Yale—10:1?

Here’s the surprise - there is a much larger difference in team performance than there is in individual performance.

It actually it didn’t take the slow team ten weeks to do what the best team could do in one week. Rather, it took them two thousand weeks!

That’s how great the difference is between the best and the worst. So where should you focus your attention? At the level of the individual, where you might be able to get an improvement of ten times if you can magically make all your employees geniuses? Or should you focus on the team level? You can boost productivity by an enormous magnitude even if you merely make your worst teams mediocre. Of course, aiming for mediocrity will get you just that. But what if you could make all your teams great? 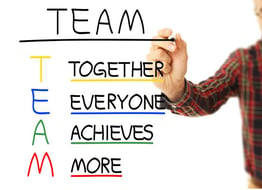 In Scrum: The Art of Doing Twice the Work in Half the Time Sutherland believes “Teams are what get things done in the world of work.”

What’s your business environment?  Is performance driven by individuals?  Or is it more likely a team effort?

In many companies artisans or artists do work by themselves.  Growth is frequently driven by individual sales results.  Yet is the result entirely driven by the individual or is it the result of a team of people backing these individuals up to ultimately perform your business outcome and provide superior customer satisfaction?

Sutherland’s argument is teams are what make the world go ’round. That’s what Scrum is based on.  Sutherland believes everyone knows this, but in business all too often we focus solely on individuals, even if production is a team effort.

Think of performance bonuses, promotions, or hiring. Everything is focused on the individual actor, rather than the team. Is this the way your business rewards performance?

It turns out it’s a big mistake.

Managers tend to focus on the individual because it makes intuitive sense. You want the best people, and people are different, so focus on getting the best performers, and you’ll get better results, right?

Well, it’s not quite that simple. 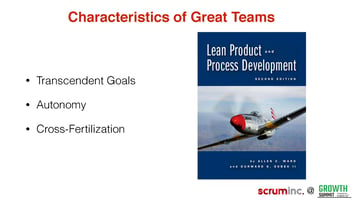 In “The New New Product Development Game,” (describing what eventually became Scrum) Professors Takeuchi and Nonaka described characteristics of teams they saw at the best companies in the world. These are the three characteristics they discovered:

So how do you create a team that aims for a higher goal, organizes itself, and constantly feeds off each member’s skills?

Might there be a simple set of rules that encourage the formation of magic?

And what do we do with the process of Topgrading in discovering the right people for our organization?

We’ll answer those questions, learn lessons Sutherland learned at West Point, look at legendary examples of team performance, what to look for in your Topgrading interviews to take advantage of this team vs. individual ratio, and why size matters in upcoming blogs.  Join us!