Since I’ve begun reading  Scrum: The Art of Doing Twice the Work in Half the Time by Jeff Sutherland I’ve sent the book to several of my customers.

One of them recently sent me an email, “I’m almost finished with Scrum.   But from what I gathered so far, it’s almost like Gerber’s book E-myth and is more of an attempt for you to want to hire a “scrum coach”.   So far it sounds all nice but I don’t know how I could apply it.”

Sutherland offers in the book you won’t learn Scrum by reading about it.  The book provides the reading chapters to explain why Scrum works and examples of businesses, governments and schools have used it to become dramatically more productive.  An Appendix at the back of the book provides specifics on how to do it. (Download IMPLEMENTING SCRUM—HOW TO BEGIN)

It’s important than you recognize as enlightening as it is to read about Scrum and the value it’s delivered to improving productivity, the only way to really get profit from it is to implement it!

To understand how Scrum works, let’s look at how it worked for the .  Scrum works by setting sequential goals that must be completed in a fixed length of time.  In the FBI’s case, it was decide to work in two-week cycles.  The understanding was at the end of each cycle there would be a finished increment of product. This means something would be working, something shown to anyone who cared to look. Most importantly the stakeholders and, of course the people who’d actually be using the thing. This methodology allows teams to get near real-time feedback on their work.

It answers questions quickly like: Are they headed in the right direction? Is what they’re planning to do next really what they should be doing, given what they’ve discovered during that cycle?

These cycles are called “Sprints.” 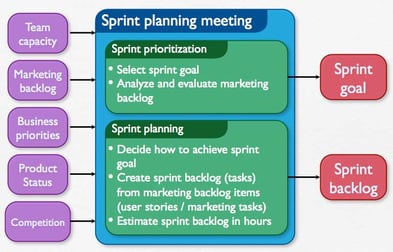 At the start of each cycle there is a meeting to plan the Sprint. The team decides how much work they think they can accomplish during the next two weeks. The principle for this is simple, people support what they help create. It’s not paradox that the best ideas and concepts share platforms for success.  The concept of people supporting what they create is a principle provided in the Great Game of Business.

Work items from a prioritized list of things that need to be done are often just written out on sticky notes and put on the wall. The team decides how many of those work items they can get done during this Sprint.

At the end of the Sprint, the team comes together and shows what they’ve accomplished during the time they’ve collaborated. They look at how many of those sticky notes they actually got done.

What’s important here is that they begin to have a baseline sense of how fast they can go—their velocity. It is crucial team members figure out what would stop them from accelerating.

At the FBI Jeff Johnson (Scrum expert) put it, “I handled impediment removal.” An “impediment” is an idea that comes from the company that first formed a lot of the ideas Scrum is based on: Toyota.

Specifically this refers to Taiichi Ohno’s Toyota Production System. One of the key concepts that Ohno introduced is the idea of “flow.” Production should flow swiftly and calmly throughout the process, and, he said, one of management’s key tasks is to identify and remove impediments to that flow. Everything that stands in the way is waste. Ohno gives waste a moral, as well as a business, value in his classic book, The Toyota Production System stating:

It is not an exaggeration that in a low-growth period such waste is a crime against society more than a business loss. Eliminating waste must be a business’s first objective.

Ohno talks a lot about the different kinds of waste and impediments that can get in the way of production. For Scrum to really take off, someone in senior management needs to understand in his bones that impediments are nearly criminal. 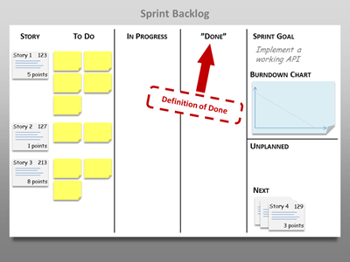 Key Question for your business:  Who’s in charge of eliminating impediments?

After the team shows what they’ve done—and here’s where Ohno’s ideas come in—they discuss not what they did, but how they did it. They ask,

Suffice it to say here that the effect of eliminating waste is dramatic, but people often don’t do it, because it requires being honest with themselves and with others.

If you’re a student of economic history you know W Edwards Deming  and the dramatic influence Deming had on Japanese manufacturing. He trained hundreds of engineers in what is called “statistical process control.” The basic idea is to measure exactly what is being done, and how well, and to strive for “continuous improvement.” Don’t just get better once; get better constantly. Always be looking for something to improve. Never, ever settle for where you are. How you get there is to be constantly creating experiments to see if you can achieve improvement. If I try this method, is it better? How about this one? What if I change just this one thing?  Refer to the Sprint Cycle questions above.  Notice the similarity?

Deming famously gave a talk to Japanese business leaders in 1950. In the audience were people like Akio Morita, the founder of Sony. In that talk Deming told them: “… no matter how excellent your technicians, you who are leaders must strive for advances in the improvement of product quality and uniformity if your technicians are to be able to make improvements. The first step, therefore, belongs with management. First, your company technicians and your factories must know that you have a fervor for advancing product quality and uniformity and a sense of responsibility for product quality. Nothing will come of this if you only speak about it. Action is important”

This method to take action, and perhaps what Deming is most famous for, is the PDCA cycle (Plan, Do, Check, Act). You can apply this cycle to the production of just about anything, be it a car, a videogame, or, heck, even a paper airplane.

Speaking of impediments, one of the biggest obstacles Sutherland had to implementing Scrum was a methodology invented in 1910 and used in World War I.  The advent of personal computers in the 1980s made it easy to create intricate charts—and to make them really complex—so much so that this planning tool became works of art. The trouble, they were never right!

We look at why chasing waterfalls is an act of futility next blog.