Friday I met with a good friend of mine who is struggling with what to do in his job.  His struggle is essentially the issue offered in The Greatest Crime.  He feels limited by his company.  Ideas he suggests get sidelined or ignored. His company doesn’t hold any meetings to keep him engaged.  He feels isolated and unable to contribute.

We’ve been discussing Jeff Sutherland’s Scrum: The Art of Doing Twice the Work in Half the Time.

Scrum creates a different kind of pattern. It accepts that we’re habit-driven creatures, seekers of rhythm, somewhat predictable, but also somewhat magical and capable of greatness. Sutherland’s thoughts behind creating Scrum were:  “What if I can take human patterns and make them positive rather than negative? What if I can design a virtuous, self-reinforcing cycle that encourages the best parts of ourselves and diminishes the worst?”

Scrum’s daily and weekly rhythms are comparable to Gazelles’ and Strategic Disciplines’ weekly meeting rhythms.   Sutherland offers his intention in doing so, “I was striving for was to offer people the chance to like the person they see in the mirror.”

How does Scrum Daily Stand-Up compare to Positioning System’s and Gazelle’s Daily Huddle?  Read Essential Meeting - Daily Huddle.  Then compare it to Scrum’s….

Scrum’s Daily Stand-Up is very similar to Gazelle’s, Rockefeller Habits, and Positioning Systems Daily Huddle. Read exactly what a Sprint is to understand the full extent of these Daily Stand-Ups. 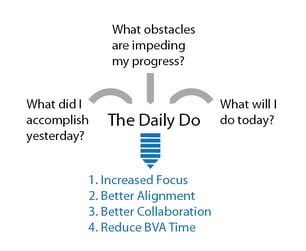 The Scrum Master, the person in charge of running the process, asks each team member three questions:

That’s the whole meeting. If it takes more than fifteen minutes, you’re doing it wrong. The intention is help the whole team know exactly where everything is in the Sprint.

Refer to our previous blog Start Sprinting – Plan, Do, Check, ACT to make sense of the following questions, or (Download IMPLEMENTING SCRUM—HOW TO BEGIN) :

There’s no assigning of tasks from above—the team is autonomous; they do that. There’s no detailed reporting to management. Anyone in management or on another team can walk by and look at the avionics Scrum board and know exactly where everything stands.

Sutherland offers some additional suggestions. The thing that cripples communication saturation is specialization—the number of roles and titles in a group. If people have a special title, they tend to do only things that seem a match for that title. And to protect the power of that role, they tend to hold on to specific knowledge. Get rid of all titles. If someone wants to put a title on their resume, they can do it for external use only. Where the work is done, there are only team members. The other ingredient in your team’s “secret sauce” is they have everyone on the team meet every single day to discuss how they were performing. Getting everyone together in a room is key because it gives the team the opportunity to self-organize around challenges. 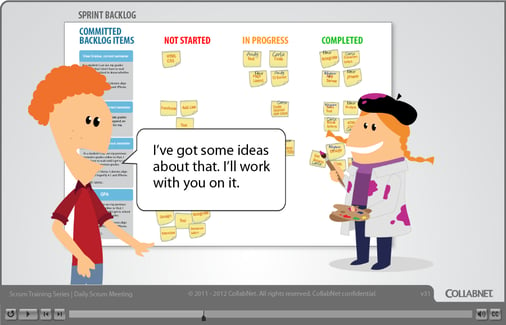 Second rule: Just like our Daily Huddle, meetings can’t last more than fifteen minutes. They should be crisp, direct, and to the point. If something requires further discussion, note it and met further after the daily meeting. Get the most actionable and valuable information in the least amount of time.

Third rule: Everyone actively participates. To help this happen, everyone stand ups (Another similarity to Daily Huddles). This stimulates active talking and listening. It keeps meetings short. It’s the reason it’s called the Daily Stand-up or Daily Scrum.

It has to be at the same time every day, with the same three questions, with everyone standing up, and last no more than fifteen minutes. (This is remarkably similar to our Essential Meeting - Daily Huddle.)

Sutherland identifies a problem we frequently see crop up in Daily Huddles as well.  People have a tendency to treat the Daily Stand-up as simply individual reporting. Sutherland offers, “I did this … I’ll do that”—then on to the next person. The more optimum approach is closer to a football huddle. A wide receiver might say, “I’m having a problem with that defensive lineman,” to which an offensive blocker might respond, “I’ll take care of that. I’ll open that line.” Or the quarterback might say, “Our running game is hitting a wall; let’s surprise them with a pass to the left.” The idea is for the team to quickly confer on how to move toward victory—i.e., complete the Sprint. Passivity is not only lazy, it actively hurts the rest of the team’s performance. Once spotted, it needs to be eliminated immediately.

Sutherland want teams emerging from that meeting saying, “Let’s nail this. Let’s do this.” The team needs to want to be great.

I love Sutherland’s speech to teams: “Do you really want to suck forever? Is that what your motivation is in life? Because it’s a choice, you know—you don’t have to be that way.” A team has to demand greatness from itself.

Think of that as a challenge. Asking your team, “Do you really want to suck forever?” might appear negative.  If we go back to the small percentage of work that individual’s feel they accomplish each day. (In The Greatest Crime we shared Sutherland’s estimate from company’s he works with that about 85 percent of effort is wasted. That means only a sixth of any of the work done actually produces something of value.) It challenges each team member to contribute and make what they do each day count!

At Easel Sutherland’s first Scrum team implemented the Daily Stand-up during the third Sprint. They’d planned out four weeks of work for that Sprint—pretty much the same workload as the previous month. They finished it all in a week. A 400-percent improvement! Sutherland notes, “That first Friday the whole team just looked around at one another and said, “Wow.” That’s when I knew I might be on to something”

Highly disciplined teams can increase their productivity eight times. That’s what makes Scrum so revolutionary. You can get more stuff done faster and cheaper—twice the work in half the time. It’s not just in business time is important. Time makes up your life, so wasting it is actually a slow form of suicide.

My youngest son, Noah plays the double bass.  He performed this Saturday for his state solo ensemble.  Watching him perform and the judge’s comments after reminded me of two important lessons my customers and your business need to do consistently perform at a high level.  Be sure to join me for these two critical ideas next blog.