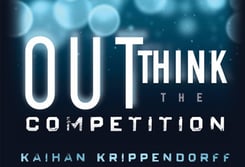 The quarterback, 145-pound Charles “Gus” Dorais, takes an imaginary hike while the other, Knute Rockne runs a pass route.  Until darkness stops their practice, they experiment with varying passes, short and long. This is nothing anyone couldn’t see today on any beach in America.

Except in this case, it foreshadows a game destined to change football forever.

Football enjoys the greatest popularity of any sport in America

The impact the movie Concussion, chronicling forensic pathologist Dr. Bennet Omalu (played by Will Smith) discovery of neurological deterioration like Alzheimer's disease in football players places the future of football at all levels on an uncertain path.

Few realize at the turn of the 20th Century, football is in a precarious position.

At the time, criticism of football increased with its appeal. Arguments centered on academics — the game kept students from their studies, and colleges used non-students as players. Seven members of Michigan’s 1894 starting team had not enrolled.

The other major disparagement focused on the game’s violence. In 1905, 18 football players died of game injuries, although only three resulted from intercollegiate play, and 88 college players suffered serious injuries.

A debate over college football’s dangerous direction raged through newspaper editorial pages and college boardrooms. President Theodore Roosevelt, a former Harvard player himself, invites officials from Yale, Princeton, and Harvard to the White House. He attempts to force changes in the game to make it safer. To better confront the issues, colleges joined in 1906 to form the forerunner of the NCAA.

Some called football “a brutal, savage and murderous sport.”

The results legalize passing the ball and increasing to 10 yards the minimum gain required for retaining possession. In 1910, the committee, restricts passers to a point at least five yards behind the line and limited the distance of a pass to 20 yards.

Two years later, the committee produces a set of rules closer relatives to modern football: passing is generally unlimited; each team has four downs to make 10 yards or lose possession; and touchdowns are worth six points and field goals three.

Dorais and Rockne are rising seniors athletes at the University of Notre Dame, a small Catholic institution in South Bend, Ind. At the request of Jesse Harper, Notre Dame new football coach, the two had brought a football with them to Cedar Point.

The NCAA loosens the restrictions on forward passes in 1912,. It changes the ball specifications to a slightly longer and slimmer model easier to throw. A few pioneers of the forward pass such as Harper want to “open up” the game from its line-plunging basics.

The next day the New York Times report of the game began, “The Notre Dame eleven swept the Army off its feet on the plains this afternoon, and buried the soldiers under a 35 to 13 score.” Notre Dame won not by playing the game better but by playing an entirely different game, with an innovation that fatally flustered Army—the forward pass. The New York Times further explained: The Westerners flashed the most sensational football that has been seen in the East this year, baffling the cadets with a style of play and a perfectly developed forward pass, which carried the victors down the field thirty yards at a clip.

In 1913 passing the football held disruptive power because it forced opponents into a dilemma. Using the game they were used to, Army was getting killed. Should they change, and if so, how? The Army team had mastered a form of football that resembled rugby, with players making close contact. Winning depended on strength and weight, gaining inches at a time. But when Notre Dame's quarterback tossed the ball over the pile of players in the second quarter, launching it 30 yards into a teammate's open arms, Army's skill at muscling the ball forward by inches was suddenly irrelevant. To respond to Notre Dame's innovation, Army had to spread its players out on the field. All that did was make it easy for Notre Dame to run with the ball through the gaps. The media reported that the ball was in the air half of the time and that Army's players stood confused, unsure whether to move out for a pass or step in to stop a run.

What Made the Notre Dame–Army Game a Turning Point in the Evolution of American Football?

Three Factors Came Together That Day

TURNING YOUR BACK ON TRADITION

As a young boy I  recall my brother, Gary, a dedicated sports enthusiast, telling me about a new method of high jumping.  He is convinced Dick Fosbury  will win the 1968 Olympics.

In 1968 Dick Fosbury literally turned his back on tradition. 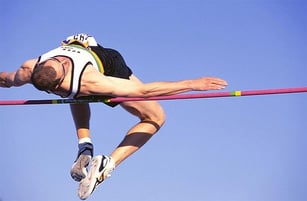 The 21-year-old U.S. Olympian ran toward the high bar just as all his competitors did. But as he approaches his mark, he twists his back awkwardly and flops over it backward. At the time of the 1968 Olympics, every gold medal winner in recent history had cleared the high bar using one of three forward techniques: the straddle, the Western roll, or the scissors jump. Every coach of every winner had trained their athletes in the same type of strategy: jumping over forward.

Every expert and every textbook agreed. As it turns out, it was the young college student, not the seasoned experts, who proved right. Fosbury clears 7 feet 4¼ inches, wins the gold medal and beats the world record by a full 2.5 inches. When the Olympics end, perhaps even before, athletes around the world rewrote their training programs. They had to learn to master Fosbury's strange technique. By 1980, 13 of the 16 Olympic finalists were using the Fosbury Flop.

As noted in Outthink the Competition: How a New Generation of Strategists Sees Options Others Ignore by Kaihan Krippendorff: The Fosbury Flop and the Forward Pass; Mongol Dominance and Rome's Successful Rout of Hannibal—They All Reflect the Very Same Pattern

There are four challenges, then, for outthinking your competition:

Are you beginning to see the pattern to Outthinking Your Competition?  Next blog we’ll explore business examples of Outthinkers and Thinkers.