Increase Your Odds Against a Giant – Unconventional Tactics

Malcolm Gladwell’s book, David and Goliath is about what happens when ordinary people confront giants. By “giants,” Gladwell means powerful opponents of all kinds—from armies and mighty warriors to disability, misfortune, and oppression.

In each chapter Gladwell tells the story of a different person—famous or unknown, ordinary, or brilliant—who has faced an outsize challenge, and how they responded.

Should I play by the rules or follow my own instincts? Shall I persevere or give up? Should I strike back or forgive?

I can identify with this due to my struggle with Acute Myeloid Leukemia.

In David vs. Goliath: Out Think the Competition we shared Gladwell’s view, to beat a competitor, you must use their strength against them 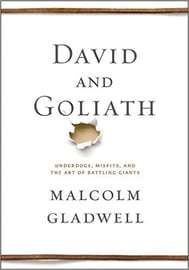 LARGE VERSUS SMALL: WHO WINS?

Political scientist Ivan Arreguín-Toft a few years ago calculated wars over the past two hundred years occurring between very large and very small countries.  These were wars where one side was at least ten times larger in population and armed might than the other. Question: How often do you believe the larger side wins?  A tenfold difference is a huge! With that advantage, you’d think the larger country should win every time. This may surprise you. Ivan Arreguín-Toft research showed larger countries win 71.5 percent. A little less than one third of the time, the weaker country wins.

Remember David in our story, David vs. Goliath: Out Think the Competition, Arreguín-Toft asked the question slightly differently. What happens in wars between the strong and the weak when the weak side does as David did? They refuse to fight the way the bigger side wants to fight and use unconventional or guerrilla tactics?

The answer: the weaker side’s winning percentage climbs from 28.5 percent to 63.6 percent.

This is a very difficult lesson to learn. We have a very rigid and limited definition of what an advantage is. The things we think of as helpful, actually aren’t. We need to think of other things that we feel are unhelpful when in reality, they can leave us stronger and wiser.

All the inventory that cab company’s like Yellow Cab, or hotels like Marriot’s have, is really not an advantage.  Company’s like Uber, Lyft, and Airbnb have found inventory, including, vehicles, drivers, rooms, great locations, without requiring the capital expense and investment their predecessors needed.

When we see the giant, why do we automatically assume the battle is theirs to win? What does it take to be a person who doesn’t accept conventional orders of things as a given?  What does it take for you and I to be like David, or Vivek Ranadivé and his band of nerdy Silicon Valley girls?

TURNING A WEAKNESS INTO AN ADVANTAGE: BASKETBALL.

Vivek Ranadive is the girls 7th & 8th grade basketball coach in Redwood City. He had no experience playing or coaching basketball, and became the coach, only when his daughters wouldn’t have had a team without someone to coach. Most of his team had never played basketball before.

Vivek Ranadivé used the same tactic. Instead of doing what most basketball teams do, run to the other end of the court after a made basket, and play defense on less than half the court, they defended all ninety-four feet of the basketball court. The full-court press is legs, not arms. It supplants ability with effort. It is basketball for those who, like Lawrence’s Bedouin (Lawrence of Arabia), are “quite unused to formal warfare, whose assets [are] movement, endurance, individual intelligence…courage.”

“We followed soccer strategy in practice,” Ranadivé said. “I would make them run and run and run. I couldn’t teach them skills in that short period of time, and so all we did was make sure they were fit and had some basic understanding of the game. That’s why attitude plays such a big role in this, because you’re going to get tired.”

The whole Redwood City philosophy was based on a willingness to try harder than anyone else.

If Ranadivé’s girls overachievers had played the conventional way, they would have lost by thirty points. The press was the best chance the underdog had of beating Goliath. Logically, every team that comes in as an underdog should play that way, shouldn’t they? So why don’t they?

In the American Revolution, George Washington almost lost the war when he abandoned the guerrilla tactics that had served the colonists so well in the conflict’s early stages. “As quickly as he could,” William Polk writes in Violent Politics, a history of unconventional warfare, Washington “devoted his energies to creating a British-type army, the Continental Line. As a result, he was defeated time after time and almost lost the war.”

Are you desperate enough?  In most cases desperation is the wrong time to being acting!

Vivek Ranadivé? He was desperate. You would think, looking at his girls, their complete inability to pass and dribble and shoot was their greatest disadvantage. But it wasn’t, was it? It was what made their winning strategy possible.

Ranadivé coached a team of girls who had no talent in a sport he knew nothing about. He was an underdog and a misfit, and that gave him the freedom to try things no one else even dreamt of.

This is the same pattern making so many company’s like Uber, Airbnb, and startups all over the world successful. They have the freedom to try things no one else is dreaming of.

For your business to grow, to achieve great things, is it time you started to Out Think the Competition, by using some of these strategies?

For help with your strategy, or any of the other Four Decisions (People, Strategy, Execution, and Cash), contact me at dwick@positioningsystems.com

Trends and reading.  It’s two very important elements to Out Thinking Your Competition.  We’ll explore Fortune Magazines just published Five Most Important Trends, and the Five Books you should be reading. That’s next blog.