David vs. Goliath: Out Think the Competition

Trends continue to impact every business.

Strategically your business needs to move to SWT (Strengths, Weakness, and Trends) in addition to SWOT in strategic planning. Focusing on trends moves to you to emphasis Outthinking Your Competition. 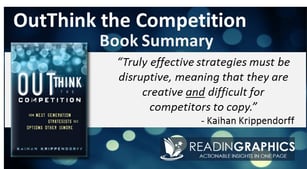 To review why and what Outthink the Competition: How a New Generation of Strategists Sees Options Others Ignore by Kaihan Krippendorff visit the following Blogs:

On vacation last week, I had the opportunity to catch up on some reading, including David and Goliath: Underdogs, Misfits, and the Art of Battling Giants by Malcolm Gladwell.

Gladwell’s Parallels to Krippendorff’s Out Think the Competition

Gladwell feels, we need a better guide to facing giants.

Here’s where David and Goliath shares conceptually with Out Think the Competition.

To beat a competitor, you must use their strength against them.  Think Dell and HP. When Dell started selling direct, HP could have followed.  Instead HP hesitated.  By the time HP followed, Dell amassed a lead HP couldn’t make up.

The process of identifying strategies includes determining the strength of your ideas based on those your competitor is unlikely to duplicate based on their strengths.  See Outthink The Competition – Ease & Impact

In reality David versus Goliath could have been one of the examples in our blog Pattern Recognition- WAR – How OUTTHINKERS Topple Thinkers. 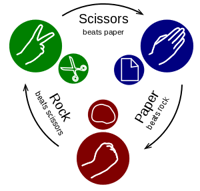 Gladwell points out ancient armies had three kinds of warriors.

Gladwell notes, “The historian Baruch Halpern argues that the sling was of such importance in ancient warfare that the three kinds of warriors balanced one another, like each gesture in the game of rock, paper, scissors. With their long pikes and armor, infantry could stand up to cavalry. Cavalry could, in turn, defeat projectile warriors, because the horses moved too quickly for artillery to take proper aim. And projectile warriors were deadly against infantry, because a big lumbering soldier, weighed down with armor, was a sitting duck for a slinger who was launching projectiles from a hundred yards away.”

Scholars believe Goliath was 6’9” or better.  The average height of an Israeli soldier at that time in history; 5’1” to 5’3”. He was a giant.

What the Israelites saw, from high on the ridge, was an intimidating giant. Yet the very thing that gave the giant his size was also the source of his greatest weakness.

An important lesson for battles against all kinds of giants. The powerful and the strong are not always what they seem.

Medical experts now believe Goliath had a serious medical condition. He looks and sounds like someone suffering from what is called acromegaly—a disease caused by a benign tumor of the pituitary gland. The tumor causes an overproduction of human growth hormone, which would explain Goliath’s extraordinary size. One of the common side effects of acromegaly is vision problems.

Why was Goliath led onto the valley floor by an attendant? Because the attendant was his visual guide. Why does he move so slowly? Because the world around him is a blur. Why does it take him so long to understand that David has changed the rules? Because he doesn’t see David until David is up close. “Come to me, that I may give your flesh to the birds of the heavens and the beasts of the field,” he shouts. The request hints of his vulnerability. I need you to come to me because I cannot locate you otherwise. And then there is the otherwise inexplicable “Am I a dog that you come to me with sticks?” David had only one stick. Goliath saw two.

Goliath is heavy infantry. He thinks that he is going to be engaged in a duel with another heavy-infantryman. He assumes David is going to fight Goliath hand to hand.

David has no intention of honoring the rituals of single combat. When he tells Saul that he has killed bears and lions as a shepherd, he does so not just as testimony to his courage but to make another point as well: that he intends to fight Goliath the same way he has learned to fight wild animals—as a projectile warrior.

What could Goliath do? He carries over a hundred pounds of armor. He was prepared for a battle at close range, where he could stand, immobile, warding off blows with his armor and delivering thrust of his spear. He watched David approach, first with scorn, then with surprise, and then with what can only have been horror—as it dawned on him that the battle he was expecting had suddenly changed shape.

Twice David mentions Goliath’s sword and spear, as if to emphasize how profoundly different his intentions are. Then he reaches into his shepherd’s bag for a stone, and at that point no one watching from the ridges on either side of the valley would have considered David’s victory improbable. David was a slinger, and slingers beat infantry, hands down.

“Goliath had as much chance against David,” the historian Robert Dohrenwend writes, “as any Bronze Age warrior with a sword would have had against an [opponent] armed with a .45 automatic pistol.”

The Israeli minister of defense Moshe Dayan—the architect of Israel’s astonishing victory in the 1967 Six-Day War—also wrote an essay on the story of David and Goliath. According to Dayan, “David fought Goliath not with inferior but (on the contrary) with superior weaponry; and his greatness consisted not in his being willing to go out into battle against someone far stronger than he was. But in his knowing how to exploit a weapon by which a feeble person could seize the advantage and become stronger.”

Does your business need help with SWT, Out Thinking the Competition and strategic planning?  Contact dwick@positioningsystems,.com

Next Blog – Winning Against the Odds.

Uber, Lyft, Airbnb, Google have all won by redefining the battlefield.  How do ordinary people win when facing outsized challenges? What is the win ratio when underdogs play with the same tactics/strategies versus new ones?  More examples from David and Goliath, next blog.