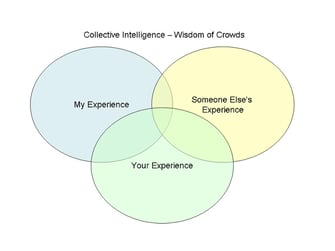 As a Gazelles coach I often facilitate the executive team meetings with my customers.  We discussed in Leadership Dominance how when the CEO is the facilitator contribution from your team is reduced by 40%.  Furthermore he’s found that if you have the facilitator pen in your hand it reduces group effectiveness & people IQ by another 20%.  A number of my customers have learned that by not leading the meeting they are able to contribute more, listen better, learn and engage at a much different level than if they were struggling with keeping the meeting on track.

If you conduct weekly meetings it’s probably happened to you that a discussion often invades one of the other segments of the meeting(Good News, Numbers, Customer & Employee Feedback, Accountabilities) which is probably more appropriately designated to Collective Intelligence.  When you get sidetracked and attempt to do CI in the moment a couple things, mostly detrimental, can occur.  You would do well to remember these before allowing the conversation to stray too much into this Collective Intelligence segment:

What did I miss?  Is there another reason that should be listed here?  Let me know by writing a comment if you have an idea.

Who leads your meetings?  This person needs to be aware how getting sidetracked and failing to stick to the agenda means less time for Collective Intelligence.  Your business may not have issues, bottlenecks or ideas that need to be hashed out and solved.  That might be a sign of something as well.  People who don’t get stuck usually aren’t for a reason.  They’re not doing much at all.  My guess is your business has a number of issues that need solving on a weekly basis.  At the very least there are a lot of good ideas that should be explored and discovered.  This is why Collective Intelligence should be the weekly agenda item everyone looks forward to.

Which is more valuable good ideas, or good people?  This is one of the questions answered by Ed Catmull author of Creativity, Inc.: Overcoming the Unseen Forces That Stand in the Way of True Inspiration, co-founder (with Steve Jobs and John Lasseter) of Pixar Animation Studios, the Academy Award–winning studio behind Inside Out and Toy Story.  Which is the answer you’d choose?   We’ll explore the answer next blog