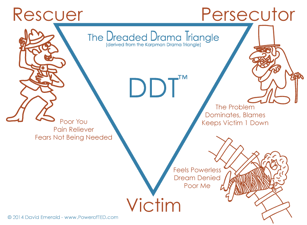 “THE MINUTE WE BEGIN TO THINK WE HAVE ALL THE ANSWERS, WE FORGET THE QUESTIONS.”

Knowing What Are You Exactly Saying Yes To allows you to say yes slower, know when you can’t complete a task, and propels you forward to achieve more.

Leaders and managers can block their progress in other ways.

Watch his video to understand more about Karpman Drama Triangle, and how to extract yourself from its grasp.

In The Coaching Habit, Staniera explains, The Drama Triangle starts by assuming that, at least some of the time, we’re playing less-than-fantastic versions of ourselves with most of the people with whom we interact. If you’ve ever found yourself playing one of the Seven Dysfunctional Dwarfs (Sulky, Moany, Shouty, Crabby, Martyr-y, Touchy and Petulant), even when you know you should know better, you get the point…. we’re bouncing around between three archetypal roles—Victim, Persecutor and Rescuer—each one as unhelpful and dysfunctional as the other. As you read the descriptions of each role below, do two things: bring to mind someone who’s particularly adept at each role, and bring to mind the circumstances in which you most commonly play each role. 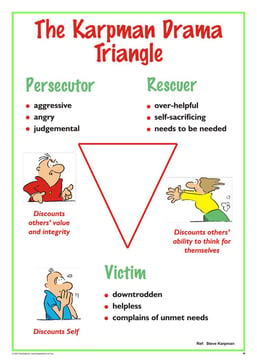 Victim The core belief: “My life is so hard; my life is so unfair. ‘Poor me.’” The dynamic: “It’s not my fault (it’s theirs).” The benefits of playing the role: You have no responsibility for fixing anything; you get to complain; you attract Rescuers. The price paid for playing the role: You have no sense of being able to change anything—any change is outside your control. You’re known to be ineffective. And no one likes a whiner. Stuck is: “I feel stuck because I have no power and no influence. I feel useless.”

Persecutor The core belief: “I’m surrounded by fools, idiots or just people less good than me.” The dynamic: “It’s not my fault (it’s yours).” The benefits of playing the role: You feel superior and have a sense of power and control. The price paid for playing the role: You end up being responsible for everything. You create Victims. You’re known as a micromanager. People do the minimum for you and no more. And no one likes a bully. Stuck is: “I feel stuck because I don’t trust anyone. I feel alone.”

Rescuer The core belief: “Don’t fight, don’t worry, let me jump in and take it on and fix it.” The dynamic: “It’s my fault/responsibility (not yours).” The benefits of playing the role: You feel morally superior; you believe you’re indispensable. The price paid for playing the role: People reject your help. You create Victims and perpetuate the Drama Triangle. And no one likes a meddler. Stuck is: “I feel stuck because my rescuing doesn’t work. I feel burdened.”

ARE YOU A VICTIM, PERSECUTOR, RESCUER? YES

These three labels aren’t descriptions of who you are. They’re descriptions of how you’re behaving in a given situation. No one is inherently a Victim or a Persecutor or a Rescuer. They are roles we end up playing when we’ve been triggered and, in that state, find a less-than-effective version of ourselves playing out.

Curiously Staniera believes, “We all play all of these roles all the time. Often, we’ll cycle through all of the roles in a single exchange with someone, lurching from Victim to Rescuer to Persecutor and back again.”

Think of the most annoying person on your team right now, the one who’s giving you difficulty even as we speak. Did you notice that in a flash, you jumped to Persecutor (They make me so mad!), Victim (It’s not fair, why can’t I get them onto someone else’s team?) and Rescuer (I’ll just keep trying to do their work for them until they get up to speed) all at once? Your Go-to Role We tend to have a favorite role we default to most of the time. When asked to identify which of these roles you play most often, most choose the Rescuer.

When we’re in Rescuer mode, we’re constantly leaping in to solve problems, jumping in to offer advice, taking over responsibilities that others should rightfully keep for themselves. We do it with good intentions; we’re just trying to help, to “add value” as managers. But you can already see the price that’s being paid by both sides.

You’re limiting opportunities for growth and for expanding the potential of those you’re working with. Rescuers create Victims. We want to believe it’s the other way around (which is also true, but not only true).

Seeing the pattern of the Drama Triangle is a strong first step in breaking the working-too-hard pattern of the time-crunched manager. Once you understand the triggers, you can start to reshape the habit.

Victim, Rescuer, Persecutor:  Which Role Are You Playing?

From Tension to Empowerment – Creating a Smart Tribe

The final blog from taken from Christine Comaford’s Smart Tribes book provides the following chart to help you understand the role you are playing.  Empowerment Dynamic allows you to move to the role where you empower others.

Making the Shift from Drama to Empowerment 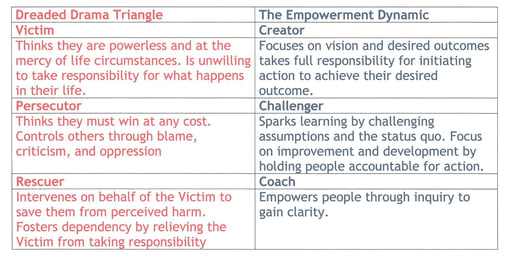 To be an effective manager and leader you need to achieve results through others.

If you are stuck in any of the roles in the drama triangle you will inevitably fail to get results. The Empowerment Dynamic provides you the ability to get results through your people.

Often some of the best potential leaders are only one step away from becoming Great Leaders simply by extracting themselves from the Drama Triangle.

Friday I conducted a half day Topgrading Orientation Presentation for a customer who decided to make Topgrading their SOP. They are a solid organization, already doing a good job hiring A players (52.8%). Several ideas sprouted to help you recruit and hire better.  That’s our next blog.