In the first or second grade I recall being in a parade of students ushered into our small home town theatre to watch the movie Ben Hur. 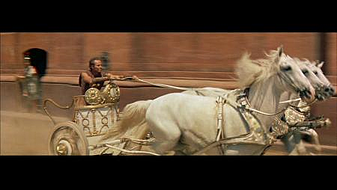 Going to a movie back then (circa 1960) was a big event.  The theatre had provided our Catholic Elementary school the entire theatre to show the movie Ben Hur.  Watching a movie on the big screen, before there were big screens in every home for TV, was awe inspiring.  I’ve grown to love the movie.  One of the conflicts in the movie is Judah Ben Hur’s rivalry with Messala, a roman tribune.

After Judah escapes the galleys, becomes a prominent Roman Citizen under Roman Consul Quintus Arrius, whom he saved during an epic sea battle, he returns to Israel seeking revenge.  On his trip to his homeland he encounters Balthazar and an Arab sheik. The sheik has heard of Ben-Hur's prowess as a charioteer, and asks him to drive his quadriga in a race before the new Judean governor Pontius Pilate.   Ben-Hur declines, even after he learns that champion charioteer Messala will also compete.  When he discovers his mother and sister contracted leprosy in prison, Judah changes his mind and decides to seek vengeance on Messala by competing against him in the chariot race.

When Judah first meets Balthazar at an oasis he watches the horses’ race under an inexperienced driver.  It’s here where Balthazar issues a famous quote to the driver, “Don’t treat my horses like animals!” he shouts as the driver repeatedly loses control of the chariot.   Judah points out the reason the chariot keeps running amok is due to how the horses are aligned. His chariot experience and intuitive sense for horses offers this keen observation.

The quote and the observation are evidence for the need for balance in your business, discussed in Balance – Optimism and Facing the Brutal Facts, and also for how to treat those we depend upon.  In this case it can be employees, customers, shareholders or even the equipment we use.  One could argue this too is a focus on balance and the two drivers, specifically the Relationship or People Driver again.

Judah explains to Balthazar the reasons why one horse should be on the inside and the others arranged according to their strengths and weaknesses.  This restructuring alone makes Balthazar’s quadriga a more formidable opponent in the race.  A One Thing focus on aligning his leadership team with their strengths doubled one of my clients growth rate for the year.  The following year his increases topped 100%.  Getting your people to work in their sweet spots, their strengths can have a dramatic impact on your business, through increased retention and employee loyalty.  Doing what you love makes for greater enthusiasm and work satisfaction.

Consider what your top priority for 2014 will be, or perhaps what it is for this fourth quarter.  Do you have a balancing priority or critical number that keeps you from unbalancing your business?  Are you so dedicated to producing a productivity result that you lose track on what this might do to impact your relationships with your customers, employees or shareholders?

Ask yourself, “Are you treating your people like animals?”   Or your customers, shareholders or even your equipment.  Too frequently we take our staff for granted.  The proper ratio of recognition to criticism is four to one.  In most companies that ratio is not even close to being achieved.  Furthermore recognition needs to be as close to the event that earned it as possible, otherwise you run the risk of praising the wrong behavior. (See How the Best Managers and Leaders Deliver Positive Reinforcement)

Strategy and Planning or not often separated.  A critical element to strategy is Profit per X.  It’s often a difficult challenge to discover. It is extremely impactful for your business.  Will explore profit per X next blog.