The greatest marketer and innovator on the planet returns to his former company, Apple, and what is his first step?  In Great by Choice, Jim Collins uses Apple as one of the comparison companies. 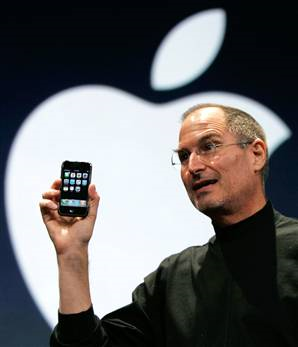 “What did Jobs first do to get Apple back on track? Not the iPod, not iTunes, not the iPhone, not the iPad. First, he increased discipline. That’s right, discipline, for without discipline there’d be no chance to do creative work. He brought in Tim Cook, a world-class supply chain expert, and together Jobs and Cook formed a perfect yin-yang team of creativity and discipline. They cut perks, stopped funding the corporate sabbatical program, improved operating efficiency, lowered overall cost structure, and got people focused on the intense ‘work all day and all of the night’ ethos that’d characterized Apple in its early years. Overhead costs fell. The cash-to-current-liabilities doubled, and then tripled. Long-term debt shrunk by two thirds and the ratio of total liabilities to shareholders’ equity dropped by more than half from 1998 to 1999. Now, you might be thinking, ‘Well, all that financial improvement naturally follows breakthrough innovation.’ But in fact, Apple did all this before the iPod, iTunes, or the iPhone. Anything that didn’t help the company get back to creating great products that people loved would be tossed, cut, slashed, and ruthlessly eliminated.” (p. 83)

Did it work?  From 1997 to 2002, Apple outperformed the stock market by 127 percent and by 2010 became the most valuable technology company in the world.

Does it shock you that someone like Steve Jobs would recognize the impact of discipline and chose to focus on this first as we begins remaking Apple in 1997?  It’s not a mystery to you if you’ve read Jim Collins’ Good to Great, “Greatness is not a function of circumstance. Greatness, it turns out, is largely a matter of conscious choice, and discipline.”  And, “A culture of discipline is not a principle of business; it is a principle of greatness.”

In every field of endeavor the impact of discipline distinguishes winners from losers.

How do you rate your company’s discipline? 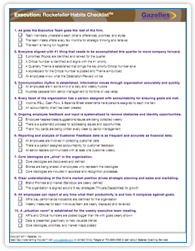 and score yourself against John D. Rockefeller and the best practices habits Gazelles coaches have identified that separate middling to poor performance from great achievement.

If you’re really courageous have your leadership team complete it as well.

If you’d like to have help Positioning Systems has an on-line form you and your team can fill out to collect your scores. We’ll send the results and average of your team to you.  Send Positioning Systems an email with the name of your company, the number of team members who plan to participate.  We’ll send you the Internet link to visit to score your results. When completed we’ll keep your results confidential and send you everyone’s individual score and the average score for your company.

Review the Rockefeller Habits checklist.  Decide whether you feel these elements are a true measure of your company’s level of discipline.  You may not agree.  Be aware that the companies in our group of high performing mid-sized businesses consistently score high on these ten benchmarks.  Watch Alan Rudy’s video to hear his endorsement of the Rockefeller Habits Checklist.  Alan has built and sold 2 multi-million dollar companies and is working on a third using the principles of the checklist.

Do you choose to be Great by Choice?  Next week’s newsletter and blogs explore some of the salient points from Jim Collins research and book Great by Choice.