Meeting Priorities - Either You Have Discipline or You Don’t

In May of 1941 the Great Britain was facing desperate times.  They were alone in the battle against the Nazi Germany and Italy’s Fascist State.  The continent of Europe was almost completely occupied by Axis powers and the Mediterranean and coast of North Africa were being attacked as well. This is the setting for one of my favorite wartime movies, Sink the Bismarck. 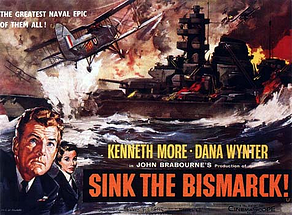 A fictional character Captain Jonathan Shepard (played by Kenneth More) enters assigned to coordinate the Admiralty's chief of operations, what is the hub and mind center of all naval traffic/operations for convoys and military ships.  He was a reluctant administrator having had his cruiser command ship blown out from under him by a German pocket battle ship. Still he was committed to his duty.

Immediately upon his arrival in this bunker some two miles beneath London Square, to protect it from Nazi Germany’s relentless bombing raids, he notices several things that bother him.  One of the current staff is eating lunch at his post; another doesn’t have his full uniform on.  Still another addresses a fellow officer by her Christian name rather than her naval rank and name.  He is upset.  When his reporting officers came into his office he asks why?  Then demands that these issues be addressed and protocol followed.

Later when the staff member who was out of his uniform requests time off through Captain Shepherd’s commanding officer (his girlfriend is shipping out the next morning) he denies the young man a possible last night with her.  When asked why he simply replies, “it’s simple sir, either you have discipline, or you don’t.”  He is unafraid to dole out discipline no matter the emotional consequences. He is dedicated to achieving the strict disciplines of his position.

I love this movie for many reasons.  However I never fully appreciated the importance of grasping the gritty details of what it takes to make military training and business work until Jim Collins book Good to Great, learning and teaching the principles of Mastering the Rockefeller Habits and then transforming my life through the challenges related to Acute Myeloid Leukemia and now my Bone Marrow Transplant.    Success really lies in the details of administering, monitoring and holding people accountable to a high standard of discipline. Most of all this includes you.

That’s the key once you’ve determined what your priorities are.  Dictating what you will measure to ensure you remain on course to achieve your priorities.

There’s no denying this.  Discipline must be followed.

Meeting rhythms with the express purposes of keeping you and your people on track is absolutely required.  That is perhaps why  companies fail to execute properly.

Many businesses lack the proper discipline to keep in the habit of meeting regularly.  Meetings are boring. Meetings are unnecessary they feel.  They are above meeting.  Meetings bring little of value in their mind to themselves or their organization.  Are you someone who has been guilty of this thinking? This is why you need a proven system to develop the practice of Strategic Discipline in your company.