Many of our biggest issues in the workplace stem from a lack of appreciation of our fellow workers.  Just this past week one of my clients faced a challenging dilemma. 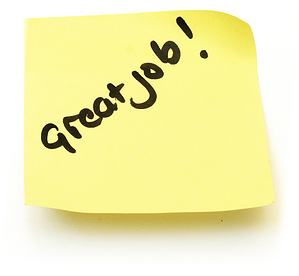 His team of support staff had put in an extraordinary amount of hours to reach a priority they’d set for the quarter.  They’d truly knocked the goal out of the park on one of their priorities while reaching 94% (goal was 100%) on another timeline that required them to get information to their clients on another.  The second priority wasn’t something that their customers were asking for however it was a benchmark everyone agreed upon to indicate their work was done without any loose ends.

A number of changes occurred that set their efforts back to completing the 2nd priority including a week’s training that demanded the services of two of the team’s best producers, changes in the scope of work from their major client, and some administrative snafus that the team should have taken more responsibility for.   The team was notified that due to the metrics that had been set they wouldn’t be eligible for the bonuses.  Despite this the team worked on, still pulling extra hours to complete the tasks to wrap up these projects as quickly as possible.

The manager of this department felt probably worse than anyone.  He felt he had let the team down by not noticing they were running behind and thus discussing it in our monthly leadership meetings to discover whether they could have more time to complete it.  He was so caught up on getting it done he failed to recognize they wouldn’t meet the success criteria they’d established.  On my part I also felt some responsibility.  Each monthly meeting we review in the first segment of the meeting how each leadership member is doing against the priorities they set.  They are to provide their successes and challenges as to what might prevent them from attaining them.

At these meeting if something has dramatically changed (better or worse) the benchmarks(metrics) can be changed provided everyone in the leadership team okays a new set of metrics.  In this case it’s very possible that losing a week of production from the team leader and one of his best producers would be cause to extend a deadline.  Furthermore a technical issue had caused another week of delay for operations.  I pride myself in being able to recognize problems in these areas, and yet I failed to ask the right questions to ensure that this leadership team member would recognize he couldn’t possibly reach the deadlines that had been set in order to hit the rewards for his team.

The dilemma now was how to respond.  The president and I agreed that it would be unwise to give any portion of the bonuses.  It would ruin integrity for future themes and set a tone that when performance wasn’t reached there would still be possibility of reward.  It would hurt the very principle that themes are set to achieve if  when performance isn’t achieved the team still received the bonus.

Be aware that the president (and owner) of the company truly wanted to give the bonus.  The team had achieved a record quarterly output.  It wasn’t that they hadn’t done remarkably well, they just hadn’t completed it in the timeline required.  Keep in mind that this team was also a part of setting the timeline and quantification for these metrics.  They were fully aware when the deadline came that they’d not succeeded.

Despite that they continued to put in the extra hours necessary to complete the task.  That is a good indication of commitment.  While the owner didn’t feel he could reward them for hitting the targets, he felt that type of commitment was worthy of recognition and some type of reward.

What would you have done in this situation?  How would you settle the conflict between reaching a company theme metric with the significant extra effort that the team extended to achieve it, and despite not achieving it, still working extra to complete it?

It doesn’t take much for me to be appreciative these days.  After going through 7 chemotherapies every morning I wake up just thankful to be alive.  Every day I make it a habit to write a thank you note to someone who has generously contributed prayer, support, financially and emotionally to my recovery.  If I miss a day I make up with several thank you notes the next day.

It wasn’t that long ago that I took much of what comprised my normal everyday life for granted.  It’s amazing what a life-threatening health challenge can help you begin to appreciate. It’s made me more aware than ever of the importance of being appreciative and providing positive reinforcement.  How many people should you be thankful for?  What would expressing thanks and finding something about them that you appreciate do for improving their attitude?

Just as customer feedback is critical to your growth it’s important to remember your customers and employees who help you succeed.  Give yourself a grade right now on how well you are at being appreciative.  On a scale of 0-10 where would you grade yourself on showing appreciation?  More importantly where would your customers score you on the same scale?  How about your employees?

My client recognized the vital message he needed to send to his team to make sure they are appreciated.  It’s important when providing positive reinforcement that it  comes as closely as possible to when the performance is achieved, otherwise you run the risk of rewarding for behavior you don’t want.  They’ve scheduled a party at a restaurant  this week on the evening they expect to be finished.  In addition the president plans to provide each of them with an individual check to express his appreciation for their commitment and contribution to their stellar 3rd quarter.  It won’t be near the size of their bonuses had they achieved the benchmarks, yet it will be substantial amount that will let them know their commitment is appreciated.

Further my client provides a company bonus at the end of the year depending on the success and profit achieved.   Based on performance so far they should have a record yearl.  He noted in our meeting that this group in particular will be at the forefront of receiving an additional year-end bonus for the commitment they’ve provided.

Next blog we’ll look at who should be on your leadership team.