When to Change Your Top Priorities

In less than 24 hours ten days ago, from Friday to Saturday the following day, my world spun 180 degrees or more. (See A Personal Story – Can You Sell Your Business?) 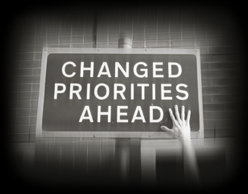 Would you have the confidence that changing them would make a difference or would you continue to plow forward hoping for the best with your same plan?

In Without A Plan: Expect 40% Less the story of Dennis Haefner’s Ideal Computer Systems displays how one company achieved a record year despite changing their priorities at the end of the first quarter due to competitors merger.

How could Ideal Computer Systems achieve such a dramatic success despite only have three quarters to hit their target?  Without question this is a good example of the value of Strategic Discipline.

Ideal Computer Systems executive team had been practicing the Rockefeller Habits disciplines of priorities, meetings and metrics for a full six quarters.  They knew what was expected of them, how to execute and as Jim Collins so aptly portrayed in How the Mighty Fail, they recognized once they’d made a course correction in their priorities no matter what the differences they had to be aligned on their new priorities.

Collins pointed out when discussing How the Mighty Fall at the 2009 Dallas Growth Summit that companies that survive the turmoil that  rocked the economy would not be those that made changes then, but those that had the foundational disciplines in place then and now and could respond to changes due to that discipline behavior that they’d already been practicing.

The ability that Ideal Computer Systems demonstrated in 2010 when they achieved record sales and profits has not born from that simple change in priorities at their first quarter planning meeting.

No, it was honed and developed in their annual planning meetings and subsequent quarterly planning sessions, the weekly, monthly, and daily huddles that executive team members and their staff attended. The culmination of these disciplined meeting rhythms allowed them to function uniformly when a crisis loomed.

Like an iceberg, any Olympic athlete, championship performer, or successful business only shows their colors in achievement.  What’s not seen is the countless hours of practice, repetition, and sacrifice, mental and physical preparation that is required discipline to achieve any worthwhile endeavor.

Speaking of change, since February 24th my routine has had to change.  Imagine having to live at the hospital without your normal comforts.  What routines would you keep, which would you change and why are routines important?  We’ll discuss next blog.