Discipline – What the Hell’s Going On?

Vince Lombardi’s quote, “What the Hell’s Going on Out Here” could easily describe how business owners and managers feel about their businesses at times. 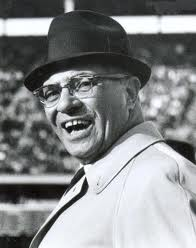 Last Saturday I stumbled upon the HBO original move entitled “Lombardi.  Being from Wisconsin and a lifelong Packer fan I settled down and carved out the 90 minutes to watch it, only glad that I’d caught it just about at the beginning of the show.

The theme that echoed throughout the remaining 80 minutes I watched was discipline.  The players talked about Lombardi time, how practices and events always started ten if not fifteen minutes early, and if you weren’t there at that time you were considered late.

They spoke with reverence about Lombardi’s impeccable attention to detail, about running the same play over and over until they achieved the outcome Lombardi desired.  Hall of Fame Quarterback Bart Starr remembered Lombardi’s first meeting where he announced that the team would work toward perfection, realizing they would never achieve it, but on the way toward perfection would achieve excellence.  This is the man he wanted to play for and everyone around him did as well.

Starr’s comments reflect the leadership capabilities of a Multiplier.  Someone who sees more in the people he leads then often they see in themselves. They are able to recognize the greatness that is often summoned through belief, courage and inspiration.  Someone who demands and expects greater performance and yet despite these expectations commands respect.

Lombardi’s focus on perfection was possibly most poignantly observed in John Madden’s clip when he attended a football workshop where Lombardi spoke on the Packers famous power sweep.  Madden said before attending he felt like he had a pretty good knowledge of the game, and after watching Lombardi dedicate 8 hours to just one play he knew he needed to learn much more.

Sport is often compared to business, and Lombardi was called to speak to businesses after his great success.  The truth is there are great comparisons between football and business, yet the theme that I believe is more important to any success is discipline.  Jim Collins quote in Good to Great kept reverberating through my mind as I watched this movie on Lombardi, A culture of discipline is not a principle of business; it is a principle of greatness.”

Greatness in any endeavor is achieved through the practice of discipline.  Positioning Systems stresses the importance of three critical business disciplines we call Strategic Discipline.  How does your business measure up to the principles of greatness as measured by discipline?  Check your discipline now by downloading and completing the Rockefeller Habits checklist.  One person and the focus of One Thing can make a difference.  The question becomes are you willing to be that one person?