A singular focus [One Thing] can have a profound effect on your business.  In April of last year one of my clients [name withheld to protect business secrets] had Positioning Systems come to his office in California to conduct our Two Day Rockefeller Habits Workshop.  At the time their business was lagging 7% behind the previous year and 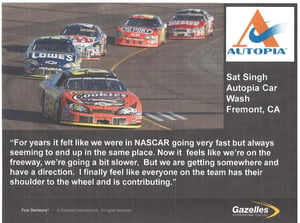 struggling to get traction.   Among the many ideas and actions that had an immediate impact was to go through the Strength Based Leadership Test and identify where his executive talents were.  At the time the business was struggling to execute in the field and we identified several of the executive that had execution themes, reassigned them to positions were they could have the greatest affect and influence on the business.  We reassigned others based on their top themes and the results were almost immediate and dramatic.  By year end they turned their 7% decline into a 15% gain for the year.

This January I was invited in again this time for a two day annual meeting.   We struggled through defining priorities and then identified what my client felt would have the greatest impact and influence on their business this year and for the next 3-5 years.  The recognition came from attending the Rockefeller Habits Workshop in Cedar Rapids several years ago when it dawned on him that his VIP customers are perhaps the most important customers he has.  At that time he was largely ignoring them.  We had several one-on-one meetings following the Annual meeting and he pointed out that one of his locations, which was possibly the poorest in terms of site appearance, access, and esthetics, performed at the highest in profitability because of its high concentration of VIP customers.  While some of his best sites had 5% VIP’s this location topped 14%.  The difference in profitability is dramatic.  Sat realized that the key to his business is getting more VIP customers.

The focus is now clear.  Concentrate on VIP’s.  Everyone in the executive team is aware of this and it has become the Mantra of the business.  They currently are working on adjusting their practices to fix some of the administrative issues they’ve had related to VIP’s, however already at the tactical level the word has spread and their people are working to increase VIP’s.

Has it worked?  My clients business is affected by the weather, and while last year’s California weather influenced his business, still this year he seen a 100+% increase in business!   That’s no small increase either, as his business is a solid six figure monthly revenue generator.  It’s remarkable.  He’s a believer that he’s found the key to building his business and because of this crystal clear focus he can only see a rosy picture ahead.  If they can do this well without apply all the tools they have at their disposal, including introducing themes, incentives, rewards, celebration and bonuses for staff, he’s confident they can reach the 3-5 year targets and more than likely exceed all his expectations.

Strategic Discipline requires you to determine priorities, develop accountabilities through meaningful metrics, and establish your meeting rhythms to get everyone communicating and recognizing the patterns that affect your business.   Isn’t it time you established the Strategic Discipline habit?