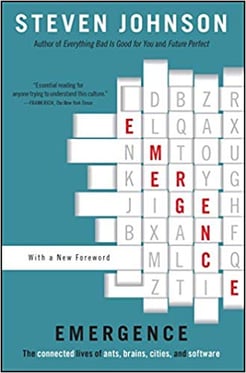 Steven Johnson is the author of Emergence, The Connected Lives of Ants, Brains, Cities and Software. Most great ideas he noted arrive in the form of hunches, unfortunately in most organizations the freedom to follow these hunches is not readily granted. What he offered was a series of examples to prove the value of what is called swarm intelligence. Order can come from the bottom of your organization, and there is wisdom in crowds. What the Internet has provided is an opportunity to see the emergence of this and the value it provides.

Wikipedia and Mozilla Fire Fox are two examples of the collective intelligence that has made these two very successful. Google’s success has come through recognizing this bottom up thinking and they have organized their search rankings by counting every link on the web as a vote and thus allowing everyone to vote to attain page rankings. It must be working since Google continues to gain in popularity as the number one search engine.

In meaning cases the bottom up pattern works better than top down, however he offered several case studies where without leadership, this eventually leads to a downfall in an organization. 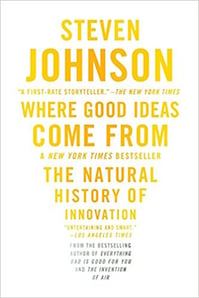 Lego is an example where the business involved their customers to develop new products and ideas. That is perhaps the most important practical piece of information I received out of this presentation. By involving your customers and your staff you can stimulate innovations. Yet customers and staff have to feel they are contributing and that these contributions are making a difference. IF they don’t the likelihood of their continuing to contribute diminishes. The challenge with this practice is getting involvement since the examples of Wikipedia and Mozilla show that in a group contribution 1% do most of the work, 10% participate, edit and offer contributions, yet fully 89% don’t do anything. In order to gain more participation Steve suggested rewarding schemes, rating comments and perhaps simply put a competitive environment in place where people compete for higher scores. Even in situations where there is nothing but a scoring system that is largely meaningless, people contribute more to raise their score.

Sites like Amazon and E-Bay have gotten great contributions for ratings and comments from their customers which has greatly enhanced their offerings and provided additional value to new and existing customers. If you’ve been to Amazon you’ve probably seen the comments from readers about a book and their rating system. Have you found it helpful? I have, and often times I will read the most negative rating just to make sure what they are saying warns me of what I should be concerned about before making my purchase.
Watch this video from Emergence: The Connected Lives of Ants, Brains, Cities and Software author Steve Johnson to learn more.

What’s to learn here? Recognize the value your staff and customers can make to your business. Don’t ignore but rather encourage them to contribute. Reward them for their contributions. Make sure you stay in touch with the pulse of your business and be open to innovations they can bring you.

What is success? Paul Orfalea, the founder of Kinko’s has a valuable offering on this as well as a number of ideas as well on the importance of managing yourself which I’ll discuss in our next blog. Happy New Year!