“Success is a lousy teacher. It seduces smart people into thinking they can't lose.” Bill Gates

“Any business still doing business as they did in the 20th century will not survive the 21st Century,”  David Rose,  economics professor University of Missouri-St. Louis. Author, The Moral Foundation of Economic Behavior.

Do you recall the story that broke on 60 Minutes Overtime that Amazon was planning to have drones deliver their packages in the future?

Salim Ismail, this morning’s Growth Summit first speaker, alarmed and excited the audience about his discussion on the breakthrough technologies and how they are impacting industry and society in general.  For the past six years Salim has built Singularity University.  Its purpose is to train a new generation of leaders to manage exponentially growing technologies.  He’s the author of Exponential Organizations, and his message is simple.  If you’re not recognizing the exponential growth that is going on and how it will affect you and your business in the near future, you are destined to be run over by it.

You may be familiar with Moore’s Law.  Simply put it’s an axiom of microprocessor development holding that processing power doubles about every 18 months relative to cost or size.

The story about Amazon, Salim explained is not imminent, however the capabilities of drones is doubling every 9 months.  Right now they are only capable of carrying 5 pounds.  In nine months it will be 10 pounds.  You get the math.

When Salim explained this to a company that produces truck tires they were first not concerned, but when he offered the exponential growth that drones were capable of, he suddenly realized that at some point in the near future drones may be serious competition to the trucking industry. To lear more READ; The Drones Are Coming, The Drones Are Coming

We’re living in an evolving digitized world.  Today your Facebook profile is more important that how you dress each day.  If you’ve not noticed this, just take a look at how people are dressing these days.

Your Smart Phone has more computation power than the entire US government had in the 1980’s.  At one point we had a scarcity problem.   Today and in the near future we’re moving toward an abundance problem.  Witness the evolution of photography and how costly developing photos once was.  Today you take so many pictures that you don’t know where to store them all.  If you take a bad picture you simply delete it. 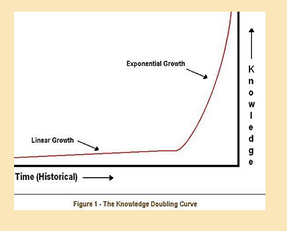 You may have seen or heard about 3-D printers.  At one time they were $100,000.  You can purchase one now for as little as $100.  Someone had developed a 3D printer that can produce cosmetics for the day.  It’s alarming the cosmetic industry.

We’ve all seen the toy helicopters that they sell in the Malls, especially before the holiday season.  NASA spent $100 million dollars to develop the first prototype.  Just five years ago it cost $700 and today you can purchase one for $25.  Furthermore it’s a disposable.

At one time it was believed that a computer couldn’t beat the best human player in the world.  That myth has been buried!  If you’re looking for a classic demonstration on how smart a computer is watch this Jeopardy duel between IBM’s Watson and Champs Ken Jennings and Brad Rutter.

The internet allows many of us to self-diagnosis our health problems.  Did you know that 35% of the time doctors get the wrong diagnosis for their patients?  A group is working on a hand held device that can beat or match the diagnosis of 10 certified doctors. Salim believes they will succeed in less than five years.

You may have heard about the Google car that drives itself.  It’s been driven 750,000 miles so far without an accident.  Six states have already authorized autonomous cars.  Uber recently purchased 500.  Each year 30,000 people die in accidents of which 90% are related to human error.  Imagine if we could eliminate that.  Don’t believe humans are the issue?  When Blackberry phones were blacked out for 3 days in the United Arab Emirates, accidents dropped 40%.

Energy will soon be in abundance. Solar Energy is doubling in price and performance every 22 months.  Within 25 years, or sooner, Salim beleives there will be enough energy to supply the world.  Realize this if you were able to harness the remaining capacity of all the oil reserves it would only amount to five days of sunlight.

What is the implication of this?

Technology is and will have a deflationary impact.  We’ve already seen its impact in the paper and music industry.  Ironically the music industry has made changes and is unlike it was when vinyl was it platform, it is making more money that is ever has.

What you must be good at is spotting exponential growth.  Experts in the mobile phone industry for four consecutive years estimated growth from 10% to 14%.  The reality: each year the growth doubled.

Salim believes in the future every company will essentially become a software company.

Salim offered this as an example of the future he sees.  A screwdriver is something almost every household has, yet how many times do we use it?  He believes in a few years there will drones at cell towers and when you need a screwdriver a drone will deliver it and then take it back for the next person.

The lifespan of S&P 500 company at one time was 67 years.  That has dropped to 15 years.  What’s remarkable is that in the 9 months that it took for Salim to write his book that number has dropped to just 12 years.

Salim provided multiple stories similar to this on how exponential growth is impacting business and society.  We’ll look at this in future blogs. As the person who introduced Salim and had seen him just a week before indicated, this information is the most impactful he’s witnessed.

It suggests to me that looking at your own industry for advancement will only bring linear growth.  The big advancements will be exponential, and unless we recognize this, your industry will be dominated by an outside business that recognizes this and takes advantage of its potential.

Not long ago only big companies could scale and grow. 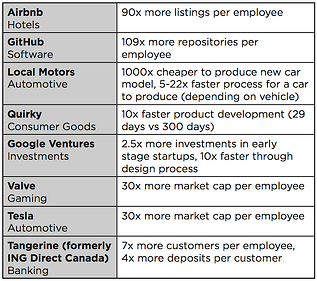 Today a small business can achieve a breakthrough and completed disrupt their industry or category.  It’s time to quit thinking like Kodak and being acting like Google or a company called Quirky

Business and society is changing.  It’s important to learn, recognize, and adapt or we will be left behind.

You can’t imagine the amount of information and good ideas that occur at the Growth Summit.  I had two blogs started before this morning, and this information was so impactful I hope that I’ve conveyed it well enough to get you to realize how exponential growth is impacting us.  We need to understand and build our organizations to be an exponential organization.