The Power of Habit provides one example:  Travis, a manager of two Starbucks locations that do over $2M in revenue.

Travis parents where heroin addicts.  He quit school at 16 and moved from job to job.  He had a consistent problem with customers when they acted rude.

Like the time when one of his customers at McDonalds said, “I wanted ranch dressing, you moron!”

Reacting to the woman Travis shouts back, “Get out of my drive-through!” throwing the chicken nuggets at her car before his manager pulls him inside.

Sometimes Travis would get so upset he’d start crying in the middle of his shift.  Often late, he’d take a day off for no reason.  In the morning he’d yell at his reflection in the mirror, ordering himself to be better, to suck it up.  But he couldn’t get along with people and wasn’t strong enough to weather the steady drip of criticisms and indignities.

In addition to McDonalds, Travis worked at Hollywood Video.   One day a regular customer who’d gotten to know Travis suggested he think about working at Starbucks.

Travis is hired as a barista on the morning shift.  Six years later, Travis now oversees 40 employees and earns $44K a year.  He’s never late for work, doesn’t get upset on the job and when one of his employees started crying after a customer screamed at her, Travis took her aside to support her, “Your apron is a shield. Nothing anyone says will ever hurt you. You will always be as strong as you want to be.”

He picked up that lecture in one of his Starbucks training courses, an education program that began on his first day and continues throughout an employee’s career. The program is sufficiently structured for Starbuck employees to earn college credits by completing the modules. The training Travis says changed his life. Starbucks taught him how to live, how to focus, how to get to work on time, and how to master his emotions. Most crucially, it has taught him willpower. “Starbucks is the most important thing that has ever happened to me,” he told author Charles Duhigg. “I owe everything to this company.”

For Travis and thousands of others, Starbucks—like a handful of other companies—has succeeded in teaching the kind of life skills that schools, families, and communities have failed to provide.

With more than 137,000 current employees and more than one million alumni, Starbucks is now, in a sense, one of the nation’s largest educators.

All of those employees, in their first year alone, spend at least fifty hours in Starbucks classrooms. Dozens more are spent at home with Starbucks’ workbooks and talking to the Starbucks mentors assigned to them.

At the core of that education is an intense focus on an all-important habit: willpower.

Please note this important study.  Dozens of studies show that willpower is the single most important keystone habit for individual success.

Why did Starbucks decide to teach each of its employee’s willpower?  Simple, by 2007, during the height of its expansion, the company was opening seven new stores every day and hiring as many as fifteen hundred employees each week.  Training them to excel at customer service—to show up on time and not get angry at patrons and serve everyone with a smile while remembering customers’ orders and, if possible, their names—was essential. People expect an expensive latte delivered with a bit of sparkle. “We’re not in the coffee business serving people,” Howard Behar, the former president of Starbucks, told Duhigg. “We’re in the people business serving coffee. Our entire business model is based on fantastic customer service. Without that, we’re toast.”

How do you teach willpower when that’s exactly what it takes to even attend training?

Some habits work automatically, others by an inflection point. 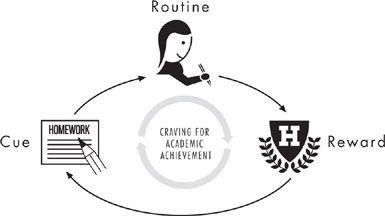 Starbucks taught their employees how to handle moments of adversity by giving them willpower habit loops.  Both require triggers.

“One of the hardest things about this job is dealing with an angry customer,” Travis’s manager told him. “When someone comes up and starts yelling at you because they got the wrong drink, what’s your first reaction?” “I don’t know,” Travis said. “I guess I feel kind of scared. Or angry.” “That’s natural,” his manager said. “But our job is to provide the best customer service, even when the pressure’s on.” The manager flips open the Starbucks manual, and shows Travis a page that is largely blank. At the top, it read, “When a customer is unhappy, my plan is to … ”

“This workbook is for you to imagine unpleasant situations, and write out a plan for responding,” the manager said. “One of the systems we use is called the LATTE method.”

L - We Listen to the customer,

A - Acknowledge their complaint,

T - Thank them, and then

E - Explain why the problem occurred,

“Why don’t you take a few minutes, and write out a plan for dealing with an angry customer. Use the LATTE method. Then we can role-play a little bit.”

Starbucks has dozens of routines that employees are taught to use during stressful inflection points. There’s the What, What, Why system of giving criticism and the Connect, Discover, and Respond system for taking orders when things become hectic. There are learned habits to help baristas tell the difference between patrons who just want their coffee (“A hurried customer speaks with a sense of urgency and may seem impatient or look at their watch”) and those who need a bit more coddling (“A regular customer knows other baristas by name and normally orders the same beverage each day”). Throughout the training manuals are dozens of blank pages where employees can write out plans that anticipate how they will surmount inflection points. They practice these plans, again and again, until they become automatic.

This is how willpower becomes a habit: by choosing a certain behavior ahead of time, and then following that routine when an inflection point arrives. When Travis studied the LATTE method, he decided ahead of time how to react to a cue—an angry customer. When the cue arrives, the routine occurs.

Strategic Discipline: priorities, meetings, and metrics, together with creating a company theme like Paul O’Neill did at Alcoa on safety can become cues to influence habits and transform your business.

“You never want a serious crisis to go to waste,” Rahm Emanuel addressing a conference of chief executives in the wake of the 2008 global financial meltdown, soon after he was appointed as President Obama’s chief of staff.

“This crisis provides the opportunity for us to do things that you could not do before.”

Recall from One Pattern Focus, A Keystone Habit, Can Change Everything, habits can be good or bad?

A 1982 study, An Evolutionary Theory of Economic Change, discovered that contrary to belief that most organizations make rational choices based on deliberate decision-making, that’s actually not the case.  Instead firms are guided by long held habit patterns emerging from employees independent decisions.  These habits have more profound impacts than anyone previously understood.

These independent decisions can create crisis!  We’ll look at two crisis these employee habit patterns created at a hospital and the King’s Cross station fire on the London Underground, and how these habit patterns are possibly influencing your business next blog.