Give and Take – What About Giver Burnout? 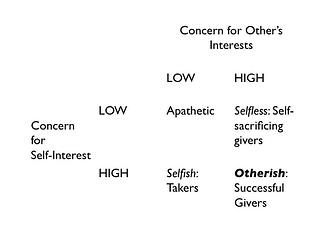 Take a look at the chart to see how selfless and otherish givers differ.

Selfless Givers are people with high other interest and low self-interest.  They give their time and energy without regard for their own needs, and as a result pay a price for it.  Give and Take describes selfless giving as a form of pathological altruism, defined by researcher Barbara Oakley as, “unhealthy focus on others ot the detriment of one’s own needs.”  In the process trying to help others, givers end up harming themselves.

Successful givers are Otherish: they care about benefiting others, but they also have ambitious goals for advancing their own interests.

Selfless giving, in the absence of self-preservation instincts becomes overwhelming.  Otherish giving means being willing to give more than you receive, but still keeps your own interests in sight, using them as a guide for choosing when, where, how and whom to give.

When concern for others is coupled with a healthy dose of concern for self, givers are less prone to burn out and get burned.  They are better positioned to succeed.

If you have giver reciprocity profile it’s natural you eventually face burn-out right?  At some point all that giving runs out and you wear down.  On the surface that would seem to make sense, however the key to giving and avoiding burnout is in the difference between being a giver who is selfless or otherish.

Here’s the remarkable principle of giver burnout: it has less to do with the amount of giving and more with the amount of feedback about the impact of that giving. Interestingly enough researchers have discovered the same conclusion in health care. Burnout in the health care field is called compassion fatigue.  It comes from the stress, strain, and weariness of caring for others.  Researchers at one time believed that compassion fatigue is caused by expressing too much compassion. Olga Klimecki and Tania Singer fortunately found that givers don’t burn out when they devote too much time and energy to giving, they burnout when they work with people in need and are unable to help them effectively.  The researchers noted, “More than any other factors, including…the time spent caregiving, it is the perceived suffering that leads to depressive symptoms in the caregiver.”

Teachers are extremely vulnerable to giver burnout.  While teachers interact with their students daily it takes many years for the impact to sink in. Teachers often wonder it their work actually matter. There’s very little benefit derived from their giving.  The result?  Effort becomes more exhaustive and harder to sustain.

Give and Take offers several examples with nurses, teachers, bankers, and a call center.  A university invited the author to a university call center in a quest to discover how to maintain motivation in their callers.  Callers contacted university alumni asking them to donate money.  The rejection rate was high.  Callers were required to ask three times for donations before hanging up, and rejection rates exceeded 90%.

Under this type of rejection even the most successful and seasoned callers were burning out.  Adam Grant assumed the takers would be dropping out yet upon researching he discovered the givers were much less productive, making fewer calls and earning less than 10 donations a week.  Grant wondered why did callers who wanted to make a difference actually make the least difference.

The answer came one day when he visited the call center.  He noticed a sign posted above a desk: 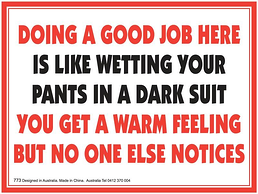 The caller displaying this sign was a strong giver.  Grant wanted to know why a giver would feel unappreciated.

The problem was givers were being denied the rewards they find most energizing.  Takers were motivated to be working at the highest-paying job on campus.  Givers lacked the rewards that mattered most to them.  Takers care most about benefiting personally from their jobs, givers care deeply about doing jobs that benefit other people.  Caller donations went directly to student scholarships. The callers were left in the dark, never getting any idea who was receiving the money nor how it affected their lives.

Grant decided to introduce letters from students who had received monies from the donations due to the callers work.  After the letters began being read in the training meetings it took just a week for givers to catch up with the takers.  While the takers also responded the givers responded more powerfully, nearly tripling their weekly calls and donations.

Do you chunk your giving or sprinkle it?  How much giving is enough and how much is too much?Better yet when does giving bring diminishing returns?

All these answered next blog.