Your team is stuck.  They keep doing the same thing day after day, week after week, month after month, and little progress is being made.  Let’s look at a real life example provided from the book The Power of Habit: 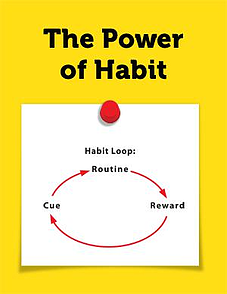 It’s November 17, 1996 in San Diego.  The Tampa Bay Buccaneers are losing 17-16 to San Diego, a team that appeared the previous year in the Super Bowl.  Tampa Bay's record is 2-8 and they’ve been a doormat team for the previous decade.  ESPN is predicting Tony Dungy will be fired before the year is complete, despite only having been hired the previous January.

Yet with only 8:19 seconds left in the game and San Diego controlling the ball on their 20 yard line something happens that makes Dungy believe his team is turning things around.  Two players react to the movement and keys Dungy has been training them to follow.  Suddenly defensive pressure causes an interception by safety John Lynch.  The turnover helps the Buccaneers score a touchdown. Another defensive stop leads to a field goal.  Suddenly Tampa Bay stuns the Chargers.  They win!

At the end of the game, John Lynch and Dungy exit the field together. “It feels like something was different out there,” Lynch says as they walk into the tunnel. “We’re starting to believe,” Dungy replies.

Tony Dungy’s system would eventually turn the Bucs into one of the league’s winningest teams. He would become the only coach in NFL history to reach the play-offs in ten consecutive years, the first African American coach to win a Super Bowl, and one of the most respected figures in professional athletics. His coaching techniques would spread throughout the league and all of sports. His approach would help illuminate how to remake the habits in anyone’s life.

His coaching strategy embodied an axiom, a Golden Rule of habit change that study after study has shown is among the most powerful tools for creating change. Dungy recognized that you can never truly extinguish bad habits. Rather, to change a habit, you must keep the old cue, and deliver the old reward, but insert a new routine. That’s the rule: If you use the same cue, and provide the same reward, you can shift the routine and change the habit. Almost any behavior can be transformed if the cue and reward stay the same.

Ever wonder why it’s hard to get improvement year over year in your business?  Perhaps it’s improvement in your life you’re looking for?

The reason is because you (or your organization) are stuck in the habits and routines that got you were you are.  You’re in a comfort zone.  You may wish to get better, yet you appear to remain in the same spot, few steps forward, few steps back each year.

We are all creatures of habit.  Unless and until we change those habits we will continue to get what we’ve always got.  You, your business will remain in the hamster wheel, desperately trying to change but doing the same things over and over that got you on that treadmill to begin with – your habits. 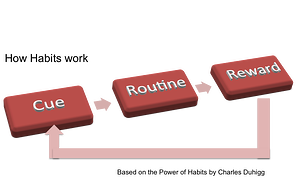 2) -- Then there is the routine, which can be physical or mental or emotional.

3) -- Finally, there is a reward, which helps your brain figure out if this particular loop is worth remembering for the future:

Habits can be changed, if we understand how they work.   When you understand how it happens, you can rebuild those patterns in whichever way you choose.

This process within our brains is a three-step loop. First, there is a cue, a trigger that tells your brain to go into automatic mode and which habit to use. Then there is the routine, which can be physical or mental or emotional. Finally, there is a reward, which helps your brain figure out if this particular loop is worth remembering for the future:

Discovery of the habit loop is so important is that it reveals a basic truth: When a habit emerges, the brain stops fully participating in decision making. It stops working so hard, or diverts focus to other tasks. So unless you deliberately fight a habit—unless you find new routines—the pattern will unfold automatically.

Dungy’s strategy, he explained, was to shift the team’s behaviors until their performances were automatic. He didn’t believe the Buccaneers needed the thickest playbook. He didn’t think they had to memorize hundreds of formations. They just had to learn a few key moves and get them right every time.   Players mess up when they start thinking too much or second-guessing their plays. What Dungy wanted was to take decision making out of their game.

In football, these visual cues are known as “keys,” and they’re critical to every play. Dungy’s innovation was to use these keys as cues for reworked habits.  The brilliance of Dungy’s system was that it removed the need for decision making. It allowed his players to move faster, because everything was a reaction—and eventually a habit—rather than a choice.

It took almost a year for Dungy’s habits to take hold.  Eventually, the patterns became so familiar to players that they unfolded automatically when the team took the field. In Dungy’s second season as coach, the Bucs won their first five games and went to the play-offs for the first time in fifteen years. In 1999, they won the division championship.

Habits never really disappear. They’re encoded into the structures of our brain, and that’s a huge advantage for us, because it would be awful if we had to relearn how to drive after every vacation. The problem is that your brain can’t tell the difference between bad and good habits, and so if you have a bad one, it’s always lurking there, waiting for the right cues and rewards.”

The Rockefeller Habits 4-3-2-1 formul includes 3 Disciplines.  At Positioning Systems we call this Strategic Discipline because they are the primary set of habits your business needs to develop in order to build a habit of success.  Once in place they automatically help your business routinely achieve success each day, each month, each quarter and each year.

We’ll explore how Strategic Discipline helps your business achieve the necessary elements to succeed by establishing the Power of Habit next blog.