Search on Google for Pearson’s Law and you’ll discover the first article is one I wrote on this principle entitled simply Pearson’s Law.  I’m proud the attention I’ve given and received on Pearson’s Law has received this amount of consideration.

For those of you unfamiliar with Pearson’s Law:

Jeff Sutherland, Scrum: The Art of Doing Twice the Work in Half the Time, learned a valuable lesson on Pearson’s Law at West Point.  Most of this story is in the book, yet if recognized for the simple principles it offers, it can transform your business and the performance of any team.  It demonstrates both the front end and the back end of Pearson’s Law.

In the early 1960s, as a cadet at the United States Military Academy (West Point) Sutherland was appointed training officer to cadet company, L2, the “Loose Deuce.” In 1963, there were twenty-four companies at West Point: A1 through M1 and A2 through M2. Three times a week companies took to the parade field for disciplined marches in full dress uniform, rifles, swords, white straps and gear placed perfectly. 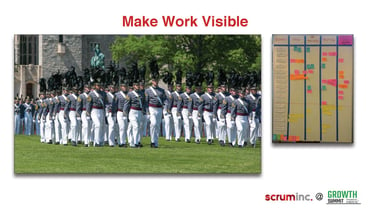 Parade formations at the Academy have been a competition for nearly two hundred years.

In 1963, the Loose Deuce was at the bottom of those rankings.  It’d been in this position for more than a century!

An interesting aspect of this story you need to understand: As training officer Sutherland had no direct power. He isn’t part of the command structure of the company. No one answers to him. No one has to do what he says. But after each parade the training officers get together and rate each company according to various criteria.  What you’re going to discover is even without any authority Pearson’s Law can have a dramatic effect on your team.

As training officer of the Loose Deuce, Sutherland decided he could make things more transparent. He made colored charts sharing what went right, what went wrong, then posted them in the barracks where everyone in my company would see them daily.

At first Sutherland’s criticisms were simple.

No punishments or blame were issued; these were simply facts laid out by the other training officers which they brought up during evaluations.  As noted this was the reasons L2 was rated at the bottom.

It took just a few weeks for the cadets to sharpen their game. As the cadets improved the low ratings began to point to the company commander:

The commander gave Sutherland heat about this, but Sutherland responded, “The ratings are the ratings. I’m just showing you what they are. The ranks have pulled their shit together. You are now the problem. Do you want to fix it? Or do you want to suck forever?”

Just a few short weeks later L2 was the number one company at West Point. 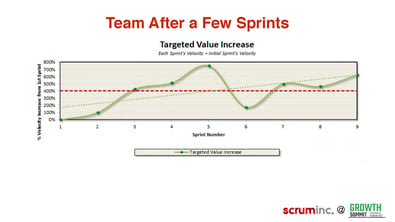 These lessons are learning from observation, measuring results, and reporting back to those involved.  It took the Loose Duce marching team just weeks to move from a perennial worst place to the top of the class.

This is the value of Pearson’s Law.   When you adopt Scrum you’re utilizing this law in every daily huddle.

General Douglas MacArthur is the most honored cadet in West Point’s history. He had the highest ranking of any cadet who graduated. He was a leading officer in both World Wars. A five-star general and Medal of Honor winner, MacArthur had a special connection to the Corps of Cadets.  At the Academy his last speech is referred to as the “Long Gray Line.”

Sutherland points to the high regard MacArthur is held to at the Academy: To this day, every cadet at the Academy has to memorize that speech, line by line, word for word, before they can graduate. That speech has become the spiritual guide for the cadet corps, and for the US officer corps at large: Duty, Honor, Country. Almost a year after that speech General MacArthur died. One company was selected to march at his funeral. To the slow, rhythmic sound of the drums, the Loose Deuce, the same company that had been the worst in the Corps for more than a hundred years, marched behind the caisson carrying the casket of one of America’s greatest generals.

Just a few months later, Sutherland marched with the Loose Deuce for the last time at graduation. All twenty-four companies marched, but L2, because of their position in the alphabet, marched twenty-third. After the ceremony Sutherland’s future father-in-law asked, “That company. The second to last one. They were different than all the rest. The others were marching; they seemed to be floating. Who were they?”

“That was my company,” Sutherland told him. “Those men buried General MacArthur.” Sutherland’s company achieved transcendence.

Your business may not achieve transcendence, but it can and will achieve dramatic results through applying Pearson’s law, and adopting Scrum.

Sutherland’s work had him study great teams.  Why did Toyota refuse to take GM’s advice in their partnership and not keep the managers at the plant they acquired to build Toyota’s?  Instead Toyota kept the employees GM recommended firing. The outcome of Toyota’s decision, plus how Scrum follows a system that lies at the core of forgiveness in our upcoming blogs.