Peter Drucker called it the “most neglected area of marketing.”

Drucker saw a clear link between pricing and profit and also sensed there is an enormous improvement potential simply by a business pricing it’s products and services right. 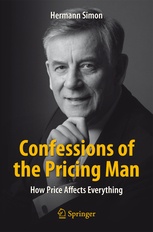 In Hermann Simon’s Confessions of the Pricing Man: How Price Affects Everything Simon touches on the elements of pricing and makes a strong case that many business are losing revenue and profits through poor pricing.

Simon believes pricing is about how people divide up value.

Simon is a big fan of Drucker and shares the intrigue Drucker had for pricing. Drucker understood profit to be the “cost of survival” and sufficiently high prices to be a “means for survival.”  In the 21st century, the word “profit” has become a magnet for protests and negative headlines.

Drucker always tried to strike a clear ethical balance. He warned against the abuses of market power. He commented on price transparency, and advocated fair behavior. At the same time, he understood the importance of making money, and described it very eloquently in an opinion piece in The Wall Street Journal in 1975: It is not the business that earns a profit adequate to its genuine costs of capital, to the risks of tomorrow and to the needs of tomorrow’s worker and pensioner, that ‘rips off’ society. It is the business that fails to do so.

According to Simon, “Managers tend to have fear of prices, especially when they need to increase them. The fear has one legitimate source: one can never know with absolute certainty how customers will react to a price change. If we raise prices, will customers remain loyal or will they run in droves to the competition? Will they really buy more, if we cut prices?

In recent years, promotions accounted for 50 % of beer sales in one of the world’s largest beer markets. Just two years later, some 70 % of all beer sales at the retail level came on special offer, with discounts as high as 50%. Whether driven by opportunity or perceived necessity, this is clear evidence that managers think that aggressive prices help their business. But is this really true?”

In our weekly meeting with my beer distributor this week, the VP of Sales, Mike Schulte presented a case for pricing not building market share at all, and how one of their best customers, while using low pricing to drive traffic, rather than feature the item in end caps and displays, frequently has the product in its normal location preferring to display products that have greater margins featured.

You may have heard a saying the Russians use, “In every market there are two kinds of fools. One charges too much, the other charges too little.”

Simon has been asked frequently to name the most important aspect of pricing.  He has a one-word answer: “Value.”

Simon offered an interesting story on value: “This reminds me of my first encounter with an international tax advisor. The first time I had a complex tax issue, he took about 30 minutes to answer it. Then he sent me a bill for $1,500. This amount was so outrageously high that it had to be an honest mistake. So I called him up. “Don’t you think that amount is a bit too high for a half hour of work?” I asked. “Look at this way, Mr. Simon,” he explained. “You could have asked a normal tax consultant. They would have probably taken three days to answer your question, and their answer may still have been sub-optimal. I understood your problem within 15 minutes, and then needed 15 more to come up with the optimal solution for you.

When I look back now, his answer was indeed the optimal one for me. I learned that good advice is not expensive. It is quite affordable, if you can recognize its value. The challenge, of course, is that we tend to appreciate the value of advice only with the benefit of hindsight. Paying that kind of money requires trust and sometimes a leap of faith. The time spent on the solution often has little correlation with its quality.”

You may feel a plumber or an electrician you call to fix something in your home is expensive for the time they’re there.  If you can do the work yourself, great.  I cannot.  In fact, if I were to attempt to do some of the things a plumber or electrician can do I end of spending a lot more money, or in the case of the electrician probably end up dead.  (Okay I can plunge my toilet myself most times, but usually that’s out of self-preservation.)

I’m only too happy to pay a professional to fix a plumbing or electrical issue knowing my time is better invested in the things I can do well.  I’ve learned over the years doing anything mechanical myself is an opportunity for disaster and greater expense.

Does Your Business Communicate Value? 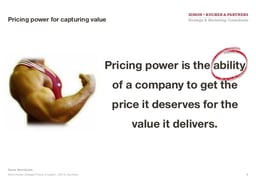 Simon shares that price is often ephemeral and quickly forgotten. Consumer research and behavioral studies shows we struggle to remember prices, even for products we just purchased. Quality, good or bad, stays with us. Each of us sees a deal, buys the product, and then realizes the product didn’t live up to even our most modest expectations. Similarly, we pay a price appearing to be too high, only to end up surprised by the exceptional quality of the product. Simon’s mother bought her first washing machine in 1964 she chose a Miele. The price was outrageously high for a poor farming family, but she never regretted this purchase. The machine lasted until she passed away in 2003

Martin Winterkorn, the CEO of Volkswagen Group, the largest car company in the world in 2014, said at a recent workshop that “we need to build excellent cars, but the brand is just as important as the product.” That is an impressive statement for someone trained as an engineer, and the kind of statement one would not have heard a couple of decades ago.

Managers have become keenly aware that value alone does you little good unless you can communicate it successfully. That means that customers understand and appreciate what they are buying. Remember, the only fundamental driver of willingness to pay is the perceived value in the eyes of the customer.

Pricing is a little explored or understood concept for most businesses.  I invite you to join me as we explore pricing in my next several blogs.  Please consider attending the Fortune Magazine sponsored Dallas Growth Summit October 25th-26th.  Herman Simon along with Patrick Lencioni will be among the quest speakers.

What really determines the value of your product to your customer?  We’ll explore how a trucking company that sells air conditioners for heavy trucks discovered the value their product delivers next blog.