You’re probably not old enough to remember a TV program that a gentleman by the name of Art Linkletter hosted.  You may remember the program from 1995 when Bill Cosby hosted it.  It was called Kid’s Say the Darndest Things.

My 5 year old granddaughter graduated from preschool a month ago.  The students, resplendent in caps and gowns for the ceremony, were asked to announce in front of their families and peers what they wanted to be when they grew up.  In just 8 seconds the video shares an attitude that I personally wish I still exhibited.  Watch, hear what Sophia says to the world about her aspirations.

Most of the other children offered professions; doctors, scientist, fireman, teacher.  Sophia, if you couldn’t hear her said, “When I grow up I want a person who can do anything!”

There’s magic in what Sophia offered.  It’s the great multiplier on our human potential.

The curious thing is that we all have 100% control over it.  It’s something you can change and it requires no degree or advancement in education, nor major investment in time and energy.

Some time ago I revealed Brian Tracy Formula for Human Potential from the tape series The Psychology of Achievement.

The Formula is diagrammed for you as a mathematical equation: 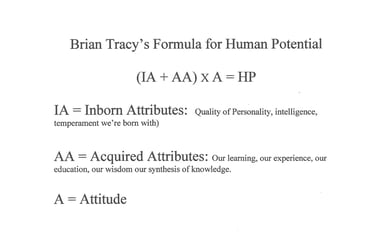 IA =    In Born Attributes: Quality, personality, intelligence, temperament that we are born with.

AA=    Acquired Attributes: Our learning, our experience, our education, our wisdom, our synthesis of knowledge

In born attributes are fixed.  Acquired Attributes take time to change.  Of the three, attitude is the only one that can be multiplied without limit.

To the degree to which we have positive or negative attitude it either releases or inhibits the release of our complete human potential.

85% of our success in life is determined by our attitude.

Survey of Harvard University graduates discovered 85% of all subsequent achievement in life after students left was because of attitude.  Only 15% would be because of grades, fraternities, background, and family.

In another interview of 1200 top executives – 94% said their attitude was the sole or key ingredient in their success.

Here’s the Key we often don’t realize or accept.

Our attitude is mirrored back to us by the world.  The world and people we deal with just tend to reflect our own attitude back to us.

•        If we expect our outcomes to be positive our attitude will be good.

•        If we expect our outcomes to be negative our attitude will be poor.

Whether based on true or false information what we expect determines our attitude.

One of the most outwardly identifiable characteristics of a winning human being is an attitude of positive self-expectancy.  The belief or feeling that something GOOD is about to happen.

Where do our expectations come from?

Belief about ourselves and reality.  These form our self-concept.

Our self-concept is the single most important predictor of our performance and effectiveness in every area of our life.  We always act in a manner consistent with our self-concept.  We are in a one to one relationship between our level of human potential and our self-concept.

Therefore the most powerful affirmation you can use is: “I LIKE MYSELF!”

It’s like putting a flame to the ball of a mercury thermometer – every time you say “I LIKE MYSELF!” your self-esteem raises commensurately.

I recall this quote from Nightingale-Conant’s audio tapes:

It is our attitude at the beginning of a difficult task which, more than anything else, will affect its successful outcome.     -- William James

It may seem like the ultimate arrogance to look at yourself in the mirror and say, “I LIKE MYSELF.”

Yet think of doing the reverse and what it would do to you.  How many of us denigrate ourselves constantly.

How many times do you say to yourself, “Dang that was stupid!  Why did I do that?  Boy you really screwed that up!  What an idiot I am.”

I’m not suggesting you become arrogant or conceited.  In fact those people are the most insecure.

The person who has high self-esteem, confidence and enthusiasm and genuinely likes himself rarely if ever gives off the appearance of arrogance.  This person is so well centered that they easily focus on others.  They make who they’re with the center of attention, asking questions, showering them with their interest by listening attentively, and in doing so earning their trust and respect.

Isn’t that the type of person you would trust to be your leader?

In summary:  What’s the One Thing you can do to achieve your potential as a leader?