How do you respond to systems? 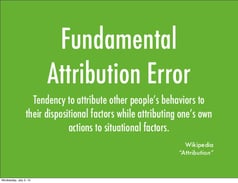 When the atrocities of the Holocaust were revealed many asked how this could happen.

In the early 1960’s the Milgram experiment on obedience to authority figures at Yale University attempted to discover how Americans might have behaved. Just three months earlier, Adolf Eichmann, the architect of the Holocaust, had gone on trial.

How could so many millions of people have been willing accomplices in such horror? Were Germans fundamentally morally reprehensible? Was there something intrinsically evil within their cultural makeup? Or were they really just following orders?

It’s very easy to look at crimes against humanity and blame individuals for their actions. The question that Milgram wanted to answer: Are ordinary Americans so different from Germans? Would they have reacted differently in the same situation?

Will you be surprised by the answer?

No, Americans wouldn’t have behaved differently. In fact, given how many countries and cultures have replicated the experiment, no one would have. Given the right situation, we’re all capable of being Nazis.

Is the System the Solution or the Problem?

In Scrum: The Art of Doing Twice the Work in Half the Time Jeff Sutherland describes how experiment worked.

The subject, an ordinary person, was told by someone wearing a white lab coat (which gave him a veneer of scientific authority) to administer ever-greater electrical shocks to a third person, an actor, who was in another room. The subject could hear but not see the actor. As the shocks increased, the actor would begin to scream and shout and beg. Eventually the actor (who in some versions of the experiment told the subject he had a heart condition) would start banging on the wall, yelling for the experiment to stop. Finally, he would go silent. Some people paused at 135 volts, as the actor screamed, and asked about the purpose of the experiment. Almost all continued after they were assured that they wouldn’t be held responsible. Some subjects began to laugh nervously as they heard the cries of agony from the next room. When the subject wanted to stop, the “scientist” simply said, “Please continue.” And if the subject wouldn’t, the scientist would go on, “The experiment requires that you continue.” If still nothing, the scientist would add, “It is absolutely essential that you continue.” Most subjects appeared to be under great stress and sweated profusely. They exhibited an elevated pulse and temperature as the “fight-or-flight” instinct took hold. And then, if they still wouldn’t press the button, the scientist would try one last time. “You have no other choice. You must go on.”

Almost everyone did, delivering the final shock to someone who’d been screaming and then gone silent. Milgram summarized the implications this way in his 1974 article “The Perils of Obedience”: Ordinary people, simply doing their jobs, and without any particular hostility on their part, can become agents in a terrible destructive process. Moreover, even when the destructive effects of their work become patently clear, and they are asked to carry out actions incompatible with fundamental standards of morality, relatively few people have the resources needed to resist authority.

In classroom discussions, it is usually pointed out to students that it is the system within which those ordinary people were operating that is the culprit, rather than the people themselves.

This is a hard lesson to internalize. If you accept the truth of that, what does it say about you?

It says is we’re all creatures of the system we find ourselves embedded in.

Here’s an example of what we’re discussing.

Have you ever gotten together with a colleague and started bitching about a third who “isn’t pulling her weight” or “always slows us down” or “makes stupid decisions”?

Or have you’ve probably been in a group confronting a problem.  Often the very first thing someone does is try to fix blame?  “It’s production’s fault!”  “X is holding up the delivery!” 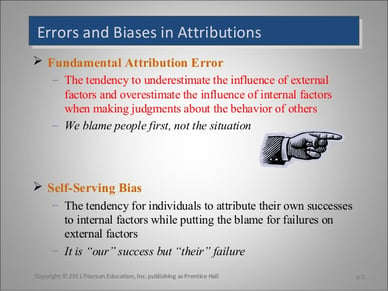 When you blame someone, you find fault with them personally.  If however you are being blamed, you’re much more aware of the situational factors that led to the problem and why you acted the way you did.

You know what? When you’re talking about yourself, you’re absolutely right.

When talking about others, though, you’re making one of the most common—and destructive—human errors in judging other people’s actions.

In Scrum Sutherland notes, This way of perceiving the world is funny when you see it in others. It’s so obvious that they’re making misjudgments. But before you laugh, you need to own up that you do it all the time as well. Everyone does. We all perceive ourselves as responding to a situation, while we see others as motivated by their character. One amusing side effect is that when we’re asked to report on our personality traits and those of our friends, we always paint ourselves as far more boring. We say we have dramatically fewer character traits than our friends.

It has a name: “Fundamental Attribution Error.” It’s a principle we’ve shared from Patrick Lencioni’s Five Dysfunctions of a Team.

It turns out that low team morale, cohesion, and productivity are based on a fundamental misunderstanding of how humans work.

Scrum accepts this reality, instead of seeking someone to blame, it examines the system that produced the failure and works to fix it.

Wouldn’t you rather be involved in a meeting where you absolutely know you won’t be blamed, and instead the focus will be on fixing a system that isn’t working?

On a personal note, I believe Scrum offers a fundamental principal for forgiveness.  We discussed how destructive criticism is.  In Steps 3 & 4: Positive Reinforcement: “Make Others Feel Important" we discussed three reasons never to criticize:

It’s no wonder team morale suffers when you invest time in criticizing each other.  In addition to tearing down the person you’re criticizing you’re tearing yourself down in the process.

Scrum isn’t just a tool to achieve twice the work in half the time; it’s a healing tool that provides the proper foundation to achieve more productivity!

Embrace it.  You and your team will feel better!

Next blog we’ll look at why Size Does Matter, but Not the Way You Think.