Over the Labor Day Weekend I watched Toy Story 2 again.

One of my customers recommended 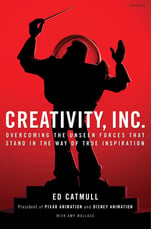 Creativity, Inc.: Overcoming the Unseen Forces That Stand in the Way of True Inspiration by Ed Catmull, who along with Steve Jobs and John Lasseter co-founded Pixar Animation Studios, the Academy Award–winning studio behind Toy Story, Toy Story 2, Monsters Inc., and Finding Nemo.

In chapter four of the book Catmull describes the stress Pixar encountered getting Toy Story 2 produced.  They fired their first two production directors 9 months before the studio was to deliver the completed film for theatres. They had to redo the storyboard for the entire film, making extensive revisions exerting tremendous pressure on their team.

Catmull learned a number of lessons from this, one of which is the answer to the question:

Which is more important, Good Ideas or Good People?

When Catmull had lunch with a president of another movie studio, the president told him that his biggest problem wasn’t finding good people, but rather finding good ideas.

That seemed patently false to him since it was the exact opposite of what he’d discovered to be true on Toy Story 2.

Catmull resolved to test whether what seemed to be a given to him was, in fact, a common belief.   For the next couple of years whenever he gave a talk he posed the question to audiences he spoke to.  Curiously the audience’s responses split at almost 50-50, no matter who the crowd was.  (Catmull notes that statisticians tell us when you get a perfect split like this it doesn’t mean half know the right answer – it means everyone is guessing, picking at random, like flipping a coin.) Only one person, in all the years he asked this question ever pointed out the false dichotomy:

With the two original directors, the film had not worked out; but with the second set of directors, it worked wonderfully because they were talented storytellers who found a way to make the audience care. A mediocre team with a good idea most likely destroys the idea; whereas a brilliant team with a mediocre idea would come up with something better.

The most important lesson Catmull learned from this experience was that getting the right team, with people that complemented each other and had the right chemistry, was a precursor to getting the ideas right.

Catmull swore never to subject his team to so much stress again. At Pixar, they make sure staff members are taken care of and can enjoy their private lives, with perks such as maternity and paternity leave that do not hinder career advancement, on-site sports installations, flexible schedules, etc.  Pixar’s culture and specifically their maternity and paternity leave are in direct opposition to Amazon’s as described in Amazon’s Culture Flaws?

Of course People being more important than ideas is in agreement with our Gazelles approach and in accord with Jim Collins’ Good to Great tenet of “First Who Than What.”

The experience of Toy Story had given Pixar two creative principles: The first was:  “Story is King,” meaning that nothing must get in the way of the story. The second was “Trust the Process,” meaning the technological and computer processes involved. This last principle, though, must be considered with reservations because it is flawed. You cannot have a reliable process unless you have reliable people, nor can you trust “the process” to fix everything. From Toy Story 2, Pixar learned to always be alert to shifting dynamics.   Pixar’s identity was cemented when the team decided that quality was above everything else and they pushed themselves to the limit in order to achieve it.

We’ll look at this principle of “Trust the Process,” in our next blog Thursday.