Get The Most Out of Customer Feedback 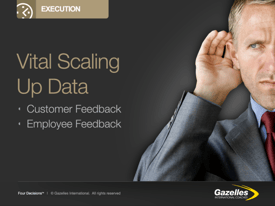 Are you getting the most out of your customer feedback?   Are you asking your senior leadership team to contact at least one customer a week?

From Verne Harnish’ Scaling Up, “The fastest-growing companies of this century — Facebook, Google, Amazon, Booking.com, and Netflix — have built business models predicated on being able to tap into more input from customers than anyone else. Using powerful algorithms to discern correlations from users’ actions gives them a great deal of their insight. Much of their data also emerges from enticing customers to make comments and leave ratings for innumerable products and services online. We’re in an era in which people don’t trust large institutions. Instead, they turn to “the crowd” to help them figure out which doctor or vacation spot to visit.”

Netflix Inc. co-founder and CEO Reed Hastings, Fortune’s Businessperson of the Year in 2010, fell from grace a year later with the botched introduction of a new pricing scheme and the aborted spinoff of its DVD mail-order service under the Qwikster name, which sent customers running and the stock plunging. Many insiders felt Hastings stopped listening — to his team and his customers — and damaged Netflix’s reputation by messing with the company’s (brand) promise of simplicity. Hastings himself admitted his arrogance.

Speed forward 30+ months, and Hastings is once again a star.

Netflix’s stock price had more than doubled from the year before, and the CEO is riding a wave of global enthusiasm for the company’s hit series House of Cards,

the most streamed piece of content in the US and 40 other countries when it was released. Fortune called this the best turnaround of 2013.

Hastings’ secret weapon is data — and massive amounts of it. It is big data analysis that allows him to predict that a series based on the corruption of government, starring Kevin Spacey and directed by David Fincher, would be a sure bet.

According to KISSmetrics, a leading blog about analytics, marketing, and testing, here’s a list of some of the “event” data that Netflix tracks for its 44 million subscribers:

One of my customers embraces the concepts from The Paradox of Excellence: How Great Performance

Can Kill Your Business by David Mosby.  The book details how by continually striving for excellence you can discover your efforts increasingly are taken for granted and undervalued. Improving performance doesn’t necessarily translate into higher perceived value. In fact, it can simply shift the customer’s expectations upward, causing the customer to take the new, improved performance for granted. Only be consistently making customers aware of your value, meeting with them, sharing the steps you’ve made, how it converts to customer benefits, competitive advantage and differentiation, do you gain the increase investment and price that your excellent quality in product/customer service should reap.

Annually they met with customers following the interview process the book outlines. This brings customers up to date on the innovation and value their service is provides, collects feedback and reinforces the benefits and ROI they are receiving.  In doing so they increase customer perceived value.  Due to this practice the company’s annual price increase is introduced since customers consistently see the value their service yields.

Another customer recently searched to hire a customer advocate/evangelist for a specific product ramping up impressive revenue gains.  They reached out to their customer base, recognizing that the best promoter would be a current user.  The number and quality of candidates from their customers list provided an outstanding selection of applicants to choose from.

In Chapter 10 The Data, Powering Prediction, Scaling Up provides a number of specific customer data and feedback examples to illustrate the critical value this best practice provides including:

If you’re not collecting customer data and asking the Customer Feedback 4 Questions (4Q) Positioning Systems and Gazelles suggest leaders ask customers in person, you’re missing out on a huge growth advantage for your business.