Not so long ago there was an emphasis on leadership to, “manage by wandering around.”  Tom Peters In Search of Excellence brought this principal into focus, although its origins supposedly stem back to executives at Hewlett Packard.

In How the Best Managers and Leaders Deliver Positive Reinforcement what top leaders and managers do to provide the most effective and immediate positive reinforcement. 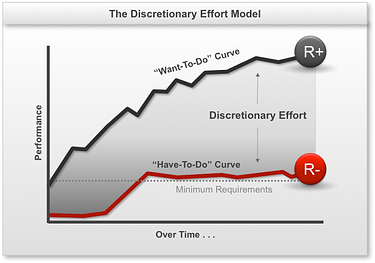 They do manage by wandering/walking around.  They don’t necessarily reinforce more often than an ineffective manager, they simply reinforce while people are performing.

The rule on delivering effective positive reinforcement is this: The longer you wait after the behavior the less effective it will be.

If you don’t feel you have time to reinforce, then at least make sure you spend the time you have reinforcing while your team is performing.

Aubrey Daniels points out that most leadership research is based on what leaders “say” they do.  Research by Dr. Judi Komaki discovered that the significant difference between effective and ineffective leaders, managers, and supervisors is…. What and when they do things.  Where do ineffective supervisors spend their time?  In their offices.  It is literally impossible to provide effective positive reinforcement here, unless your team performs in some fashion in your office.

In many businesses the emphasis on having a management or supervisors office is seen as an accomplishment.  Yet taking the supervisor out of the workplace and into an office or meeting room is precisely the wrong way to get better performance from the people they are managing.

When the leader, manager or supervisor is in the field it’s easy to know/see what you are reinforcing.  In addition this works as well for the performer who receives the reinforcement.  They’re almost certain to know what behavior that is being reinforced.

Here’s a good example of this principle.  Imagine you’re training your dog to roll over.  When do you give him the treat?  Do you give it to him a half hour later, or immediately after he rolls over?

If you reward him a half hour later your dog will be rewarded much the same most employees are given benefits.  There is no contingency.  Reward him frequently enough and you’ll get him to do whatever he’s doing at that moment in anticipation of receiving a treat.  If he is lying down or resting, you may begin to train him to be lazy.

In PIC – Positive Immediate Consequence Aubrey Daniels noted that you increase the behavior that is occurring when you get it [positive reinforcement]. This is the problem that occurs when we don’t reward immediately. If we reward when the person is no longer doing what we intended to increase, the person being rewarded will assume what he is currently doing is what he is being rewarded for.  It compounds the value of “catch someone doing something right!”  If you can do that consistently, reward with an immediate positive consequence, you will consistently get the result/performance you are seeking.

It’s darn near impossible to reward someone immediately if you’re not out working with or observing them while they are working.  Sales manager who sit in their office and expect to get results from their salespeople are either unaware of this rule or are simply lazy.  In many cases they were trained in this same fashion.

Effective managers recognize that getting into the field, commenting and rewarding staff for their performance while they are working is the easiest, simplest, and most effective way to get better performance.

Are you or your managers out in the field each day observing your staff performing?  If you’d like to improve your performance, now would be a good time to change how you and your managers manage and especially deliver immediate positive reinforcement.

The fourth rule for positive reinforcement is make it frequent.  How many times will your team’s linebacker need to see a play run before he instantly recalls it?  If you visited PIC – Positive Immediate Consequence you already know the answer.  Next blog we’ll examine this.