Take a look at the picture on the right. 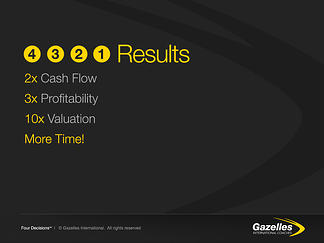 It’s a slide we share in our Four Decisions, public and private, one and two day Rockefeller Habits Workshops.  Infrequently people question these results.  They can’t believe these ratios and improvements are possible.

From 1972 to 2002, the timeframe Great by Choice measured and researched their 10Xers and comparison companies for the book, Southwest Airlines produced the #1 return to investors for all S&P companies that were publicly traded in 1972 and held for a full 30 years to 2002.  If you’d invested $10K in Southwest Airlines in December 31, 1972 it would have grown to $12 million dollars by the end of 2002.  That’s a return 63 times better than the general stock market.

We all know what the airline industry has been through during this time frame, including the challenges of the 2001, September 11th terrorist attacks.  That’s what makes their world-beating performance most impressive.

Southwest Airlines fanatic discipline is described in Have You Defined What Not To Do – Great by Choice SMaC Recipe.  Faced with the airline industries deregulation, Southwest Airlines CEO, Howard Putnam reviewed their SMaC (Specific, Measurable and Consistent) and determined they would stay the course. (See the SMaC recipe blog for what Southwest’s SMaC recipe was).  It reinforced with Putnam was works and what doesn’t.

Rather than assume their principles and methods had become obsolete, they first considered whether the Southwest had strayed from its recipe, or had forgone discipline and rigor in adhering to it.

Great by Choice is not just about company performance or stature.  It’s about performing despite the extremity of the environment in comparison to other companies in your industry.

The table of 10X Case Studies show companies that performed anywhere from 14 – 63 times the market, and 11 to 550 times their industry.

Great by Choice dispels a number of myths including:

The key to generating the type of numbers truly great companies produce is a set of different behaviors. These are the rewards of Fanatic Discipline.  What Collins offers in Great by Choice is that companies that succeed have fanatic discipline, productive paranoia, and empirical creativity surrounding level 5 ambition.

We’ll explore what Fanatic Discipline looks like in our next blog.