This morning during our monthly meeting one of my client’s debated their Core Values.  A year ago they completed them and after reading Patrick Lencioni’s book The Advantage, the owner determined that it would make sense to revisit them based on the definitions of Core Values that Patrick Lencioni had defined in this book.

In 1996 Harvard Business Review published an article, Building Your Company’s Vision, by Jim Collins and Jerry Porras, that explored a number of the principles from their book Built to Last, and specifically the fact that companies who enjoy enduring success have core values, a core purpose that remain fixed, while their business strategies and practices endlessly evolve and adapt to the changing world. 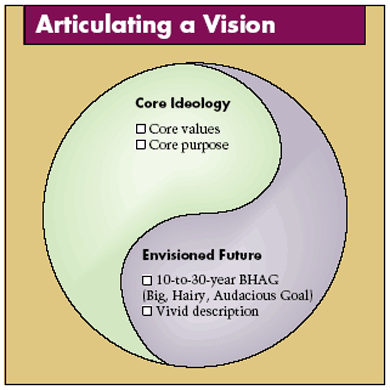 Core Ideologies defines the enduring character of an organization.  It’s the glue that holds an organization together as it grows.  Core values are defined as a small set of timeless guiding principles, core values require no external justification; they are intrinsic value and importance to those inside the organization.

While there is no universally right set of core values, they did offer guidelines including limiting your core values to a few, three to five.  They also believe they should be an authentic, exhibiting characteristic that exists now within your organization. You do not create or set core ideology. You discover core ideology. You do not deduce it by looking at the external environment. You understand it by looking inside.

The Mars Group exercise designed to help you discover your Core Values is a good example of this.  Imagine that you’ve been asked to re-create the very best attributes of your organization on another planet but you have seats on the rocket ship for only five to seven people. Whom should you send? Most likely, you’ll choose the people who have a gut-level understanding of your core values, the highest level of credibility with their peers, and the highest levels of competence.

Other questions asked in the HBR article include:

The value of the last three questions goes to their enduring value.  Core Values should not change.

One distinction that separates Collins and Porras from Patrick Lencioni’s The Advantage is their belief core ideology is to guide and inspire, not to differentiate.

Lencioni feels that the mistake those leaders made in following Collins and Porras’ Core Value principles was trying to be all things to all people, which led them to make their values statements as broad and inclusive as possible.

He sees within organizations different kinds of values; Aspirational Values, Permission-to-Play Values, and Accidental Values.  We’ll explore these definitions in another blog.  The importance here is to realize that these representation of Core Values are not “core.”

Lencioni agrees with Collins and Porras that they are few Core Values—just two or three—behavioral traits that are inherent in an organization.  He also believes the first step is to identify the employees in the organization who already embody what is best about the company and to dissect them, answering what is true about those people that make them so admired by the leadership team. Those qualities form the initial pool of potential core values.

His next step is identify employees who, though talented, were or are no longer a good fit for the organization.  It is the opposite of those annoying traits that provide yet another set of potential candidates for core values.

Finally, leaders need to be honest about themselves and whether or not they embody the values in that pool.

The place where Lencioni’ differs with Collins and Porras is his distinction with Permission to Play Values.  Here he asks, “The best way to differentiate them is to ask, Would our organization be able to credibly claim that we are more committed to this value than 99 percent of the companies in our industry? If so, then maybe it really is core. If not, then it’s probably a candidate for permission-to-play; it’s still important and should be used as a filter in hiring, but it’s not what sets the organization apart and uniquely defines it.”

Where Lencioni is in disagreement with Collins and Porras is that Core Values can differentiate you competitively in the market place and actually attract or repel customers.

Do you build your Core Values to Differentiate your business and use them as a competitive advantage as Patrick Lencioni believes or do you believe as Collins and Porras do that it’s not critical to make this distinction with your Core Values?

My client today reviewed their Core Values remaining focused on the principles that Collins and Porras offered in the 1996 HBR article. They chose not to immerse their Core Values in Lencioni’s direction as he discussed in The Advantage, although the changes they made in our meeting especially those dedicated to customer service could be seen as attracting or repelling a specific type of customer.

Most importantly they chose to remain authentic to who they are now.  Their Core Values add a deep sense of clarity to their organization.  An area of agreement for both Lencioni and Collins and Porras is this: How do we get people to share our core ideology?  You don’t. You can’t. Instead, find people who are predisposed to share your core values and purpose; attract and retain those people; and let those who do not share your core values go elsewhere. Indeed, the very process of articulating core ideology may cause some people to leave when they realize that they are not personally compatible with the organization’s core.

Ask yourself if your Core Values achieve this?  You do have a set of Core Values don’t you?

What’s the importance of Core Values for your company?  We’ll look at two critical values they provide in my next blog.