I’m a history lover and perhaps the story I offer today will not make the same point it made on me.  Hopefully this Civil War recounting will help you understand the value of clarity, the importance of everyone’s oars moving in the same direction, and how despite setbacks you can achieve success through persistence and determination.

Recovered in 2000 in Charleston, South Carolina, the CSS H. L. Hunley is a testament to these principles. 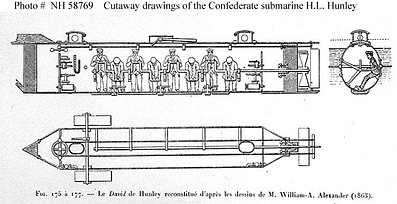 While many inventors had worked on a submarine model dating back to Ancient Greece and the battle for Tyre, the Hunley was the first to sink a warship. Not until World War I, 1914 did another submarine sink and enemy warship.

The Hunley was the mastermind of Horace Lawson Hunley.  It was powered by seven men turning a hand-cranked propeller. One crew member steered and directed the boat.  The Hunley was actually built in Mobile, Alabama where it was tested, sinking a flatboat in Mobile Bay.  Sent by rail to Charleston it sank twice taking the lives of 13 people including the inventor Horace Hunley during a mock attack.

Imagine seven crew members in a tight compartment all earnestly turning their hand cranks to propel their warship forward.  On the night of February 17, 1864 the steerage person directs them to the USS Housatonic. The Housatonic is a 1240-ton, steam-powered sloop-of-war with 12 large cannons, stationed at the entrance to Charleston, South Carolina harbor, about 5 miles out to sea.

This was before the invention of the torpedo, so the Hunley had a spar mounted on its bow to be used when the submarine was some 6 feet or more below the surface. The spar torpedo had a barbed point, and would be stuck in the target vessel's side by ramming. The torpedo was detonated as the submarine backed away, sending the USS Housatonic and five of her crew to the bottom in five minutes. 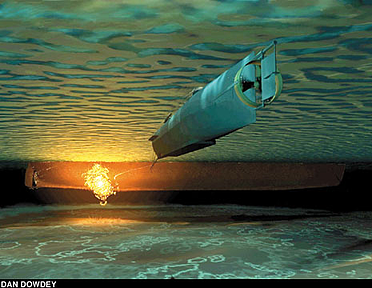 Unfortunately the Hunley sunk as well after sinking the Housatonic.  It’s unclear why, however some historians suggest the percussion from the blast on the Housatonic knocked the crew out and they were unable to regain consciousness before their oxygen ran out.

The Hunley was the first ship of its kind.  It was designed to break the Union blockade on Charleston Harbor.  Despite two trial setbacks the clarity of its purpose and what it could do for the Confederate war effort gave this group of submariners a clear vision of what their purpose was and how important it was to their cause.

Eight men in a small boat accomplished a mission.  While they perished, the message should be what they accomplished.  World War I and World War II provide evidence of how powerful submarines could be in the outcome of these conflicts.

81 percent of employees surveyed indicate they are not held accountable for regular progress on the organization’s goals. And the goals are not translated into specific actions—87 percent had no clear idea what they should be doing to achieve the goal.

Is your business doing better than this?  In order to achieve success you need to develop a Strategy Statement, and then communicate it to your people.  This is where implementing the principles of Strategic Discipline are crucial.

Your team needs to have meeting rhythms that communicate consistently the priorities for your business.  Metrics need to be in place so people are held accountable for performing to meeting your priorities each quarter and year.

The discipline to focus on One Priority, (Your One Thing) metrics to measure your progress toward achieving it, and meeting rhythms cadence of accountability builds habits and routines that will help your business meet or exceed your quarterly and annual priorities consistently.