Meeting Rhythms as outlined by Positioning Systems Strategic Discipline provide your business with:  A Cadence of Accountability. 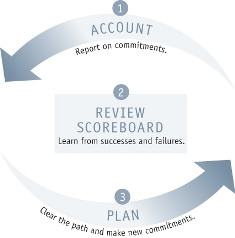 This should be music to you, your managers and your leadership team’s ears.

According to research from The Four Disciplines of Execution a staggering 81 percent of employees surveyed said they were not held accountable for regular progress on the organization’s goals. And the goals were not translated into specific actions—87 percent had no clear idea what they should be doing to achieve the goal.

This alone may explain why my customers have such significant success when implementing Strategic Discipline.  Imagine your team being held accountable with specific actions – leading indicators to influence and put them in control of their outcomes.

Lack of commitment to the goal was another problem. Even those people who knew the goal lacked commitment to achieving it. Only 51 percent could say that they were passionate about the team’s goal, leaving almost half the team simply going through the motions.

Furthermore, another prime suspect behind execution breakdown is clarity of the objective: People simply didn’t understand the goal they were supposed to execute. In fact, in their initial surveys the authors (Four Disciplines of Execution) learned that only one employee in seven could name even one of their organization’s most important goals. That’s right—15 percent could not name even one of the top three goals their leaders had identified. The other 85 percent named what they thought was the goal, but it often didn’t remotely resemble what their leaders had said. The further from the top of the organization, the lower the clarity

No wonder execution is so inconsistent. In short, people aren’t sure what the goal is, aen’t committed to it, didn’t know what to do about it specifically, and aren’t being held accountable for it.

Is it possible that this is why according to Matthew Wong (Inc.Feb 2013?

There are two principal things a leader can influence when it comes to producing results: your strategy (or plan) and your ability to execute that strategy.

THE REAL CHALLENGE:  Whether you call it a strategy, a goal, or simply an improvement effort, any initiative you as a leader drive in order to significantly move your team or organization forward will fall into one of two categories:

The first requires mainly a stroke of the pen;

Jim Stuart (Four Execution of Discipline) summarized this challenge as follows: “To achieve a goal you have never achieved before, you must start doing things you have never done before.”

Moving toward accountability in your organization requires the latter.  You must start doing things you’ve never done before.

Hiring a coach ensures you start doing things you’ve not done before.  It sends a signal throughout your organization that change is imminent.  It impacts you and your leadership team and which cascades throughout the organization as you begin to make changes.

Do you want accountability?  Are you willing to change in order to achieve it?

Strategic Discipline requires a level of energy, commitment, persistence, and dedication frequently lacking in most organizations.  The statistics provided prove this.  Few recognize the amount of discipline required to achieve results.  The irony here is once Strategic Discipline is achieved the rhythm required to maintain it makes it an almost unstoppable force to continue.  Structure builds momentum, and the Power of Strategic Discipline is seen in the growing energy burst you’ll discover your organization now possesses.  Once you adopt this routine, you’ll refuse to allow it to ever dissipate.  The stark difference it makes is noticeable in 30-90 days.

I promised in my last blog one more issue your meetings need to focus on: Conflict.  Patrick Lencioni notes in Death By Meeting that the reason meetings are boring are due to lack of conflict.  That may sound counter intuitive.  Conflict within your leadership team is good.  It suggests that your people and you as a leader can be vulnerable.

Without conflict issues that impact the company can often be overlooked, ignored or swept under the eye of pattern recognition simply because people are afraid to bring up the brutal facts.  They fear being embarrassed or possibly shamed in front of their peers.  Just as accountability works best in Strategic Discipline’s Meeting Rhythms, so does conflict help bring the truth to light and help impact the direction and decisions that are crucial for driving your business forward.

If you’re meetings are without conflict, consider picking up Patrick Lencioni’s Field Guide on the Five Dysfunctions of a Team. It contains exercises to help your team build trust which leads to results.  Alternately you can hire a coach to facilitate this. 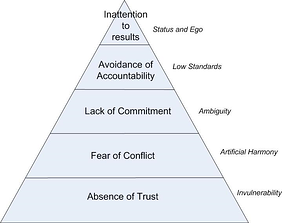 The important thing is recognize that if your leadership team meetings don’t have an element of conflict occasionally, chances you’re not getting a true picture of how everyone feels.

Your organizations is suspect to reduced effectiveness without your leadership teams willing contributions.

On Monday it will be one year since I learned I had Acute Myeloid Leukemia.

Wednesday I had my 12th biopsy, which will provide some more significant results since I’ve recently been challenged with Graft Versus Host Disease. That had not been the case with post bone marrow transplant biopsies. I’ll have some observations on my year and possibly results to share next blog.

By the way, there’s still time to establish the Discipline Practice in your business.  Check out our “Strategic Discipline Momentum Builder” to get your business growing for the 2nd  quarter and 2013.