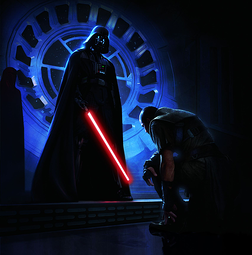 “The dark side clouds everything. Impossible to see the future is.”

A catalyst can come from many places.

It would have been hard to admit it, however in February of 2012 I believe I was in or moving deeper into a dark place.  My enthusiasm for my business diminished, too often taken by addictive tendencies, and a belief that I couldn’t or didn’t want to change my internal or external environment.  My belief structure inhibited me.  Relishing the idea that I was an introvert I justified the notion that I worked best alone. Avoiding working with others and being involved in the community was disguised as “not my thing.”

Despite this, intuitively I wanted to grow and improve.  For this reason I’d joined Toastmasters and a networking group in Cedar Rapids called Breakfast of Champions that fall.  They were the beginning of lifelines to fix where I was.  From these two choices transformation started.  Nothing more impactful and miraculous helped break through this dark side then the discovery of Acute Myeloid Leukemia on February 25th 2012. It’s the reason I’m working on a book that at this point I’ve titled, “How Leukemia Saved My Life.”

One powerful catalyst in this process of transformation has been Gary Gunn,

founder and owner of Turnaround Tour.  His business specifically focuses on small to mid-size automotive service companies. Gary was an independent E-Myth coach.  We met when the E-Myth decided to eliminate its independent coaches (when Michael Gerber went through a divorce and left E-Myth). Gary and I and a group of other independent E-Myth coaches planned to develop our own proprietary materials. We met several times in an effort to partner with one of the writers of the E-Myth processes.  We were unable to ever put together a reasonable working agreement with this writer and decided to develop our own or discover resources that fulfilled our objectives.  This meant I discovered and embraced Verne Harnish’s Mastering the Rockefeller Habits, while Gary decided to modify E-Myth’s approach and develop his own proprietary materials for the automotive industry.

Gary and I decided to meet every other week to sharpen each other’s saw, and make each other accountable to our goals and intentions.  We’ve been meeting since 2008.  Gary possesses a deep faith in God and I confess that more than once his spiritual commitment has both made me feel guilty about my own path and helped me to stay directed to my faith and relationship with Him.  He’s unwavering in his discipline to his faith.  It’s inspiring.  These convictions extend to his commitment to his customers and the automotive service industry.

Since discovering I had cancer he’s been unbelievably supportive, increasing his calls to weekly, more frequently when my health issues became more challenging.  He was helpful when researching the decision to possibly move to MD Anderson in Texas.  Michelle and I were puzzled about the course of action to take for clinical trials.   His son is on the staff at MD Anderson in Texas.

Gary has had a strong influence in my life spiritually and business wise.  He’s willing to ask tough questions and keep me accountable to my goals.

Another coach who’s had a strong influence in my life is Ted Bonel.  Ted and I met through my original relationship with Kelly Schwedland (ABDynamics.com owner and the first to put E-Myth on the Internet.) who mentored my progress in coaching.  Ted is another E-Myth coach who has also graduated to the Rockefeller Habits/Gazelles coaching platform.  He lives in Australia, and we’ve been connected since 1998 although much more so since I joined Gazelles in 2008.  Originally Kelly and Ted would exchange leads.  When a US company hit on Ted’s website he would share it with Kelly and vice versa.  That relationship continued when I purchased ABDynamics from Kelly in 2005.

Ted and I see each other once a year when he attends Fortune/Gazelles Growth Summits in the fall.  He’s been instrumental and keeping me accountable, especially to the development of new material and presentations for my clients.  We share our learning and education, plus ideas on marketing and particularly new presentations and learning experiences we are providing for our customers.  He is the epitome of a constant learning, growing, consistently developing professional.  We both love to learn and teach our customers new ideas.  Thus we share a common bond to continual improvement.

The events and choices I’ve made have all been catalysts in my life.  Do you recognize these same patterns in yours?  The relationships, the people I’ve chosen to help coach me, ask me tough questions about what I’m doing personally and professionally, hold me accountable to what my priorities, always serve to increase the pace of my progress.

How much is improving your time line to progress worth?  Each day since my Acute Myeloid Leukemia discovery I awake with a renewed sense of vigor and enthusiasm.  I realize all too well that which I’d taken for granted can quickly be plucked away.   Death stares all of us in the face at some point.  The question is what we will accomplish by that moment when the Creator calls us?  Will you be happy with your potential fulfilled or not?

I intend to make every moment count.  Coaching has helped me starting with someone who believed in me when I was in high school.  It can make a significant impact on your personal and professional progress.  What further do you need to hear to enlist the services of a coaching professional?

Question for next blog: what makes you a good candidate for coaching?  Research from Sales Evaluation and Screening Experts Objective Management Group extensive testing data reveals what helps you achieve more in less time.