Have you ever had your spouse, a supervisor or manager say something like the following to you?  “Doug you did a great job on …., but you really need to work on…...”

If you have, you’ve been victim of what’s called the Great Verbal Eraser.  In sales I learned that when speaking to a prospect when you bring the word, “but” into the discussion the prospect completely erasers everything you’ve said previously.  The same is true in providing positive reinforcement.

When you ask your managers and supervisors whether or not they are giving their people positive reinforcement you always hear “of course we are.”  Aubrey Daniels indicates managers do compliment and positive reinforce their workforce, unfortunately they don’t stop there.  Most frequently they add the word, “but you could have done this better.”

“But” is the great Verbal Eraser. 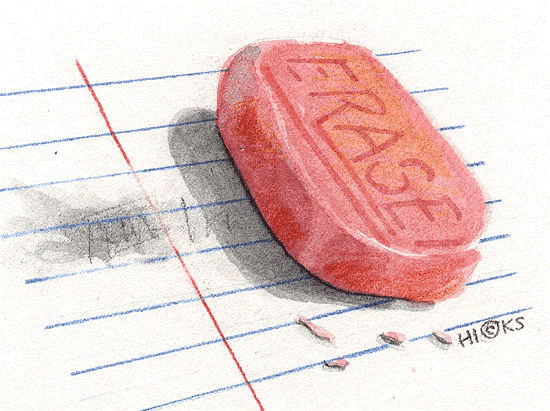 That’s why you have probably found that there is a discrepancy in what your workforce feels about being positively reinforced and how your managers feel they are applying positive reinforcement.

Here’s an example from Aubrey Daniels Bringing Out the Best in People to help you understand the level of angry, resentment and hurt a “you did great, but…” can provide.  It should also help you to realize that this lesson is something that needs to be learned at almost every size and level of a company.

The president of a nationally known dairy products company once told me (Aubrey Daniels) that he received a call from the chairman of the board of their holding company.  The call started off, “John, I was just looking at your financials results from last year.  You set a record.  It was the best the company has ever done.”  At this point the president said he was feeling great.  However the chairman went on to say.  “…But if you had a better handle on your inventory during the second quarter , you could have done even better.”  John said he was devastated immediately and got angry later.  Certainly the chairman is certain he complimented John for doing a good job.  If asked, he would probably say that John knows how much he appreciates his work.  We know form John’s experience he felt neither complimented nor appreciated.

Ask yourself how often are you guilty of using the Verbal Eraser?  Are your managers better at this than you?  Are they even aware of the damage the “but” word affects work force performance?

Eliminate the “but” word from you and your management teams vocabulary.   Eliminate the Verbal Eraser by remember this rule.

Rule: Do not use the occasion for praise as an opportunity to prompt or instruct.

One more question you may be having.  When do I teach my management team about this?  If you’re following the principles of Strategic Discipline once every month minimum you have the opportunity to present these types of ideas in the monthly learning, planning and solving portion of the monthly meeting rhythms.

Most companies play lip service to the idea of training.  Companies that embrace and follow the leadership principles for effective meetings provided by Positioning Systems Strategic Discipline have a meeting rhythm pattern in place that assures every monthly meeting has a short time frame spent on training its leadership team on an important aspect of human behavior, strategy, execution or cash.  Are you prepared to establish that kind of discipline for your business?

Another rule that needs to be recognized is often considered the proper way to provide constructive criticism.  It’s called the sandwich.  If you’re using it we’ll discuss why you shouldn’t in my next blog.