One of my very good clients in Florida is a season ticket holder for the Florida Marlins.  Naturally he’s been very disappointed this year with the Marlin’s performance.  Expectations were high with opening a new stadium, brought in a new manager  (Ozzie Guillen) and new ball players (Jose Reyes) to make a strong drive for the playoffs and possibly the World Series.

Hanley Ramirez was one player expected to contribute greatly to his team’s performance, and yet after several years of strong performance, his production has dramatically declined. 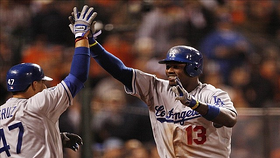 It was not shocking to see management decide to trade him before the Major League trading deadline to get something for a ball player who would not or could not perform for the Marlins.

What happened?  Ramirez in his first twelve games for the Dodgers produced eleven runs batted in, including a walk off game winning home run and at least another last at bat winning run.  Did Ramirez suddenly become engaged and enthused with his new environment.  Were Marlins management and leadership responsible for his poor performance in Florida?  Are the Dodger’s management and leadership and location much more appealing to Hanley and thus responsible for his dramatically increased performance?

Has it truly improved his performance?  On the surface perhaps, winning games is what baseball is all about and no question Hanley’s performance has won the Dodgers several games.  My client points to Hanley’s numbers during his time with the Dodgers to indicate nothing really has changed, and indeed despite his game winning hits, Hanley is actually performing at a poor performance level than with the Marlins.

Regarding the Hawthorne Effect, in all cases, observed individuals behave or perform better than unsupervised individuals for a limited time as long as they suspect or know about the observation. The effect diminishes over time. Let’s look at a department in your company which goes undergoes a change in management.  Productivity is likely to rise in the short term, especially if your employees believe that they are more closely observed than they were under the previous management. In the long term, performance reverts to previous levels unless another environmental change occurs.

The good news then for my client is that he can expect not to see much change in Hanley Ramirez’s performance with his new club, thus somewhat erasing the sour taste a losing a former All Star who once hit over 30 home runs, batted in 100 runners and hit as high as .342 in a season.  Promising performance that unfortunately failed to continue his ascension as one of the premier ball players in the Major Leagues.

Change and observing your employees performance may bring about subtle, even short term improvements.

Real performance improvements involve improving employee engagement, establishing clear priorities and metrics as discussed with Pearson’s Law. An established Strategic Discipline of priorities, meeting rhythms and metrics is the true path to meaningful employee productivity.   Do you feel your business has these tools in place to move the needle on improving your business?